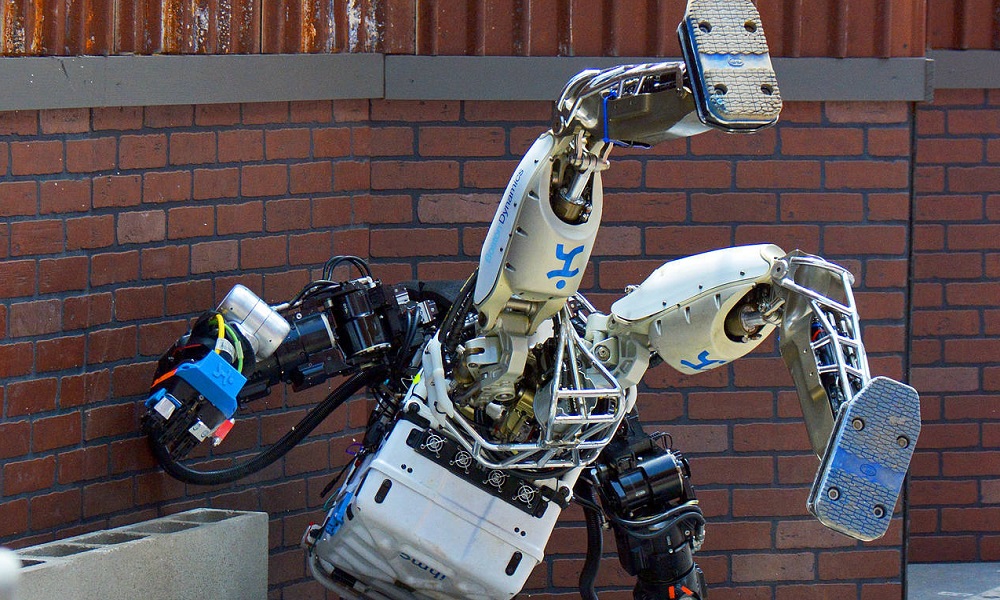 5 of the dumbest robots the world has ever seen

Terrified at the prospect of artificial intelligence running amok? Convinced that it won’t be long before gigantic killer machines with improbable Austrian accents are rampaging willy-nilly through our high streets? Hey, don’t sweat it buddy.

After seeing video footage of eerily capable robots in action earlier this week, we came down with a bad case of techno-fear – so we decided to cheer ourselves up.

For every chillingly implacable droid barrelling remorselessly towards its target, there’s loads of robots that can’t even open a door without making a balls-up of it, the twits. Here then, is our guide to the five stupidest robots of all time. In your face, robo-twerp.

Twiki the Robot – Buck Rogers in the 25th Century 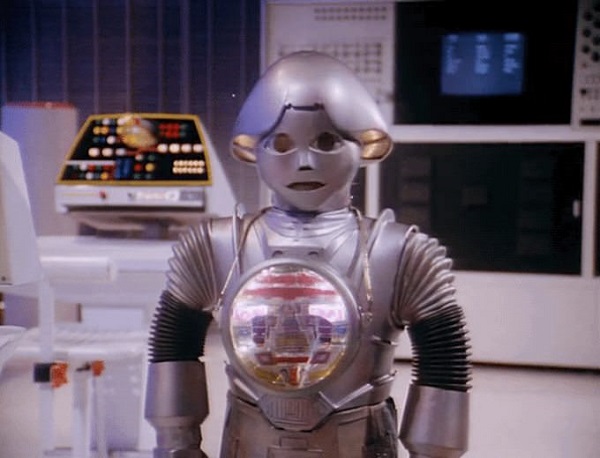 Robots haven’t always been our mortal enemy. Back in the late seventies, they served as comic relief in undistinguished US TV show Buck Rogers. The pint-sized robot twiki would walk around the place emitting a weird ‘beediebeediebeediebeediebeedie’ noise and generally looking like a toddler version of one of the cybermen from Doctor Who.

Voiced in strangely gruff fashion by the legendary Mel Blanc, who used to do Bugs Bunny, Daffy Duck, all the greats, it’s fair to say Twiki was pretty harmless as robo-sidekicks went. Still, the diminutive droid’s decision to make weird sound effects when he could speak perfect English was pretty stupid, so we hereby induct Twiki into our hall of fame for moronic robots. 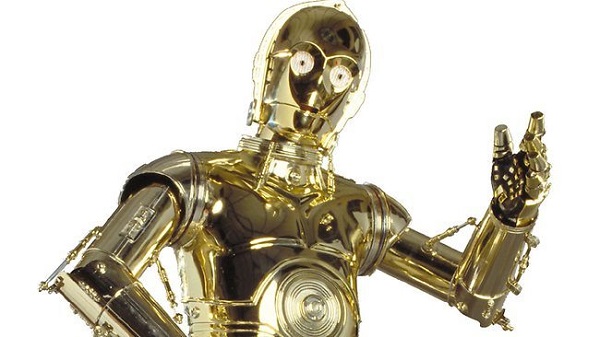 If Twiki had a peculiarly uncultured voice, this robot from Star Wars had such an effected, effete tone he could have got a job as a snooty hotel concierge, should the work as speaking in a camp English accent for comic effect ever dry up.

During his scenes in Star Wars, Threepio generally spent his time complaining in florid fashion about the various misfortunes visited upon him by the whims and fancies of Darth Vader, the Empire, all that jazz. Meanwhile, R2D2, very much the Sid James to C3P0’s Kenneth Williams, took care of business while Threep was being ineffectual. Snobby, supercilious and short on processing power where it counted – there’s no doubt about it, this droid was a dud. 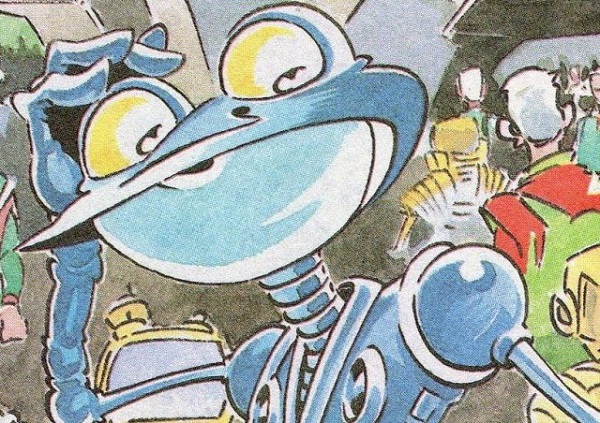 Okay, maybe this selection is a little obscure, but indulge me – Sam Slade was one of the greatest comic book strips of the early 80s, with exasperated gumshoe Slade encountering a variety of imbecilic robots each week via the pages of cult publication 2000AD (home of Judge Dredd and Strontium Dog, amongst others).

Anyway, while Sam’s work necessitated dealings with all sorts of dimwitted droids, none came more astonishingly unintelligent than the detective’s own assistant Hoagy. The spindly-armed, bug-eyed bot might have meant well, but his idiotic theories and cack-handed attempts to help Sam only hindered the beleaguered sleuth.

As if one electronic ignoramus wasn’t enough to contend with, Sam also smoked a homicidal robotic cigar that spoke in an excitable Cuban accent, regularly referring to Slade as ‘the fines’ steenkin’ robo hunter in all the worl’!’ while imploring Sam to shoot anything that moved. A nutcase in his own right, Stogie might have been a simpleton – but he couldn’t hold a light to king of the robo-chumps Hoagy, that most bird-brained of bots. 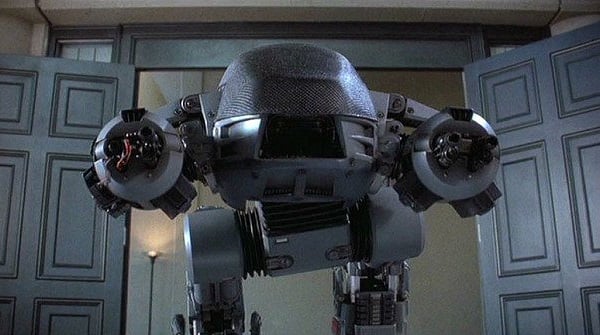 ED-209 offered humour of a rather blacker vein, this oversized robot issuing curt orders to anyone it deemed guilty of breaking the law – then gunning them down anyway. As Robocop villain Dick Jones put it, “the enforcement droid series 209 is a self-sufficient law enforcement robot. 209 is currently programmed for urban pacification, but that’s only the beginning.”

Alas, Dick’s vision for the future was undone, as ED-209’s first big demonstration ended with the robot riddling a hapless executive with bullets. Stupid in the most terrifying way imaginable, ED-209 manages to make your typical copper look like a candidate for MENSA. 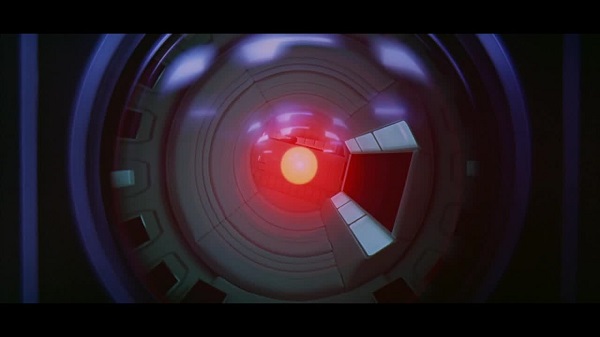 Okay, this wasn’t technically a robot; instead this omnipresent computer was to be found aboard the Discovery One spacecraft from Stanley Kubrick’s landmark movie. And to be fair, it wasn’t dumb. HAL 9000 was pretty smart, alright; unfortunately, he was also entirely psychotic.

Yes, perhaps bored with running the spaceship and having to look after the human astronauts on board, HAL concocted a scheme to kill them. From reading their lips to devising spurious reasons to send the astronauts into space to their doom, this computer was perhaps the most diabolical operating system until Windows 8 came along some 40 years later. Zing!

And you know what? Even with his formidable intelligence and logic, eventually the humans beat the machine. So who’s best Hal? Is it you, a poxy box of wires and circuitry? Or is it us, the brilliant flesh and blood types who created you? Eh? Hmm? Yes, it’s us! In your face Hal! In your face.

Whether you’re no longer terrified of robots, or you’re still resigned to a world where humans exist only to serve a complex android hierarchy, it’s best not to worry about these things. Even if robo-armageddon is inevitable, in the meantime why not pay our casino a visit? You can check out the full range of slots, table games and more at 32Red.

5 facts about Pancake Day that will blow your mind
Out now: Diamond Empire