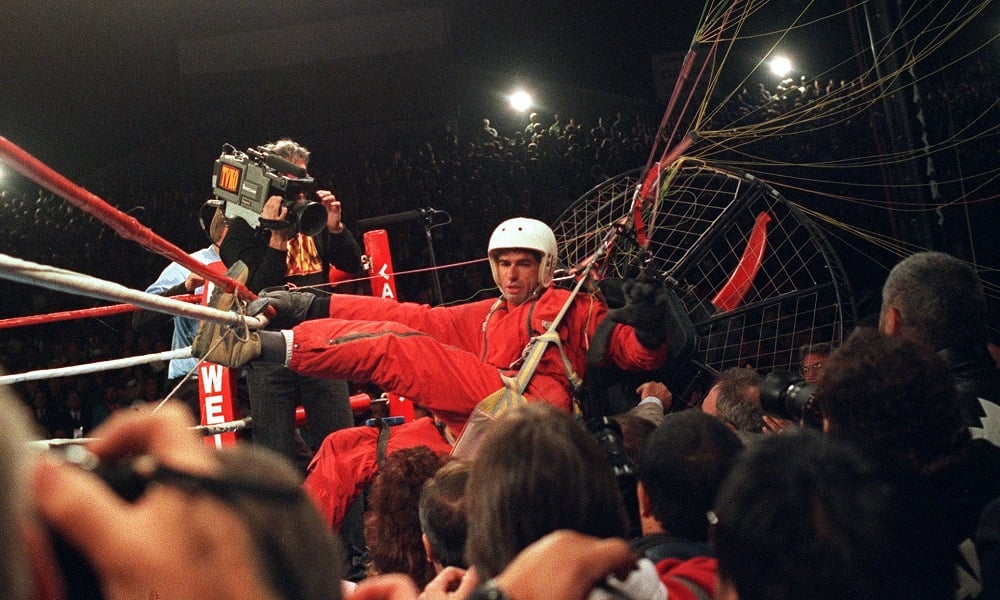 Beyond the Whoopee Cushion: 5 sporting events that collapsed into chaos

With Stuart Bingham and Ali Carter vying for glory on Sunday night, the hushed atmosphere at the final of the Masters was thrown into disarray by a rogue whoopee cushion.

Witnessing one of Britain’s premier snooker events being undermined by a variety of puerile noises is a haunting reminder that any sporting occasion, no matter how sacred, can be just moments away from anarchy.

Here are five other famous occasions when sport spiralled into pandemonium. 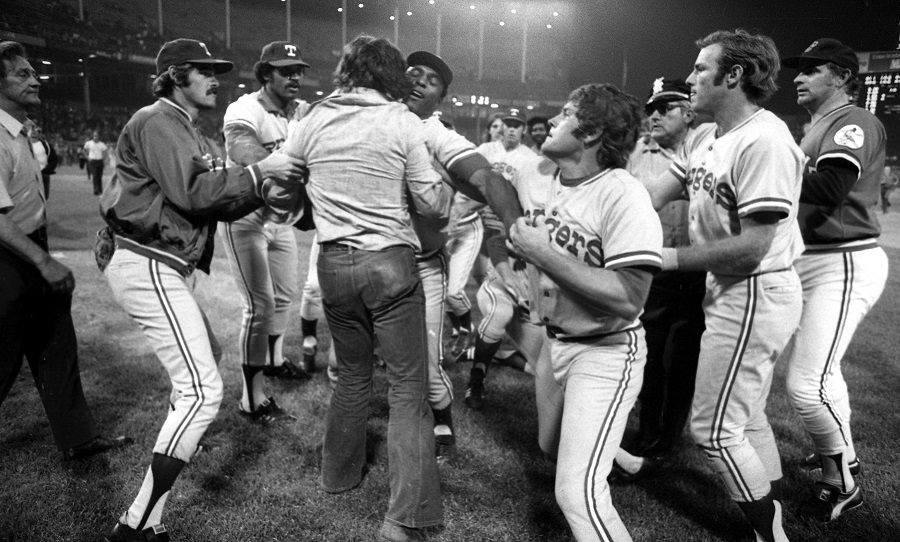 In an ill-conceived promotion devised to attract more people to attend, Major League Baseball team the Cleveland Indians offered attendees the chance to purchase unlimited cups of beer, at just 10 cents a pop.

The brew-based promotion quickly proved counterproductive. With freeflowing booze removing inhibitions, people ran onto the pitch in various states of undress, while sections of the crowd hurled food at players on the rival team.

Things really kicked off when 19-year-old fan Terry Yerkic took to the field to try to steal a cap from a player’s head. In response, Rangers manager Billy Martin ran up to confront Yerkic, prompting a bona fide riot.

Hundreds of inebriated fans descended onto the pitch, some brandishing weapons. Players, coaching staff and officials were attacked; umpire Nestor Chylak was clobbered with a chair. As the teams fled to the clubhouse to avoid confrontation and possible injury, fans continued to run riot on the field; Chylak would later describe them as “uncontrollable animals”.

The 1970s were clearly a golden period for angry crowds at baseball games. Throw in a disproportionately furious reaction to the disco craze, and you have the ingredients for a night of all-American stupidity.

This baseball promotion saw a double header of games between the two teams – with the action punctuated by a literally explosive piece of performance art, as a crate filled with disco records would be detonated because, uh, some people didn’t like disco.

Even before that, the disco-hating attendees had been displaying their own peculiar prejudices while the first game was in play, hurling records onto the field – along with firecrackers and empty bottles of booze.

When the detonation eventually took place, the force of the blast created a large crator in the pitch, meaning the second game would have to be cancelled (the White Sox would forfeit the game).

That wasn’t the half of it though, with thousands of disco-despising fans celebrating by taking to the field, destroying bases and stealing equipment while a huge bonfire of vinyl continued to burn – a disco inferno, if you will. The invaders would refuse to leave the pitch until riot police entered the fray. 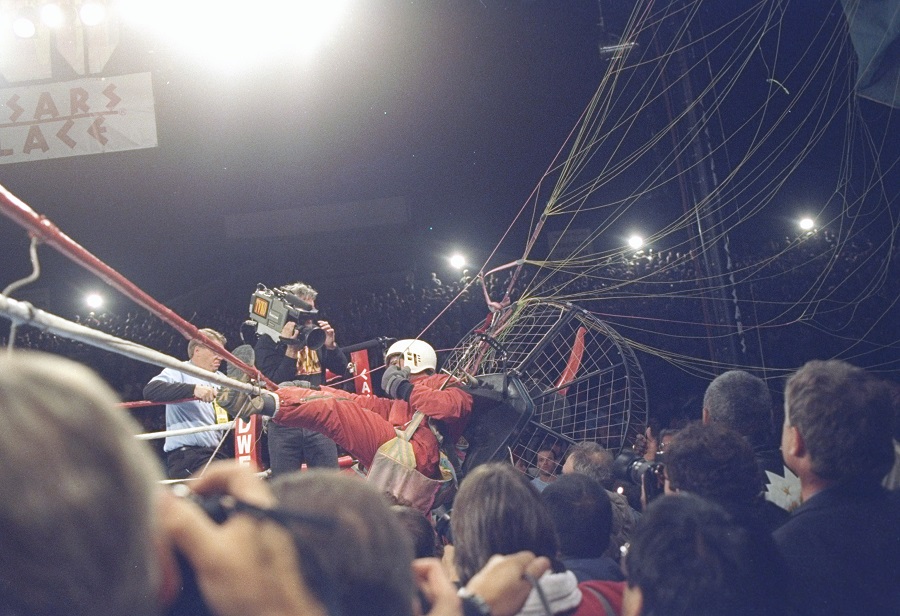 With Holyfield and Bowe meeting in November ’93, after the younger Bowe had triumphed in their first meeting a year earlier, attendees at the rematch in Las Vegas were expecting a night of exhilarating boxing action.

They weren’t expecting a man with a gigantic fan strapped to his back to descend into the ring from the skies, but that’s almost what happened. As it was, the now sadly deceased James Miller, better known as “Fan Man”, didn’t quite make it into the ring.

With Holyfield and Bowe swapping punches mid-bout, Miller glided down towards the pair of them, eventually becoming tangled up in the ropes – where furious onlookers, angry that Miller had disrupted the fight, began to beat the living daylights out of him.

Knocked unconscious for his troubles, Miller would later claim, implausibly, that his appearance had been an accident caused by mechanical issues with his fan engine. A dubious excuse – particularly since the fly boy would go onto pull similar stunts at an American football game and even an FA Cup match between Bolton and Arsenal in 1994.

After the sound and fury of the previous entries, this one is perhaps a little less bombastic. In 1997, bitter rivals India and Pakistan were set to face each other in a cricket competition known – not without irony – as the Sahara “Friendship” Cup.

The two sides would play a series of five one-day internationals in the neutral territory of Toronto, Canada, with the hope being that the focus could be on cricket, rather than the seething enmity between the two nations.

At the second ODI, Canadian based Indian Shiv Kumar Thind attended the event – and made his presence known with a loudspeaker megaphone, which he used to berate the Pakistani batsman Inzamam-ul-Haq.

Thind’s insults were notable for their sheer outlandish childishness, the fan loudly telling the Pakistani player he resembled a “fat potato”, and also, bizarrely, the Buddha.

Ul-Haq took exception, entering the crowd to confront Thind – at one point brandishing a cricket bat in the general direction of his nemesis, before he was restrained by security. The incident meant play was delayed for some 37 minutes; ul-Haq would serve a two-match ban for his actions. 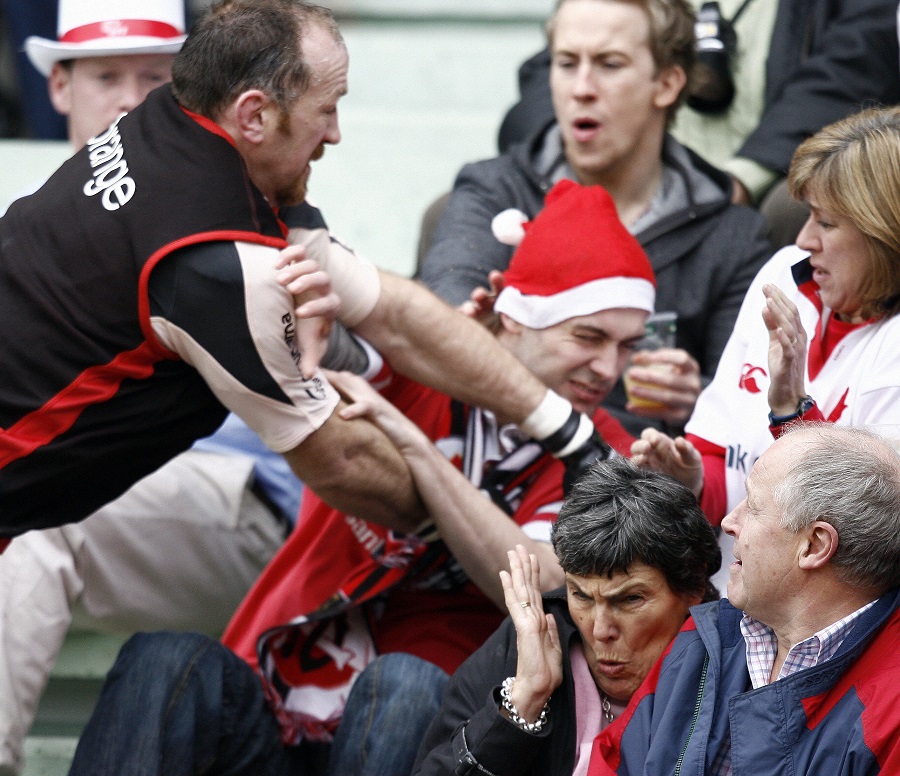 More player/spectator interaction, though this one seems even more outlandish than the previous entry. Rugby fan Patrick Bamford (not that one) attended a Heineken European Cup to cheer on Ulster against Toulouse – and the 25-year-old Londoner took the opportunity to loudly abuse Toulouse flanker Trevor Brennan about a pub Brennan owned locally.

With Bamford reportedly suggesting the De Danu pub served “watered down” pints of ale, Brennan was sufficiently incensed to storm into the crowd – and punch his tormentor.

Said Bamford: “I just shouted out ‘A below-par Irish pub, Trevor’. he climbed over the barrier and started to climb up the steps. I thought it was a bit odd and that he was coming for a bit more banter. I actually put my hand out to shake his hand. I don’t remember much after that.”

Brennan paid a high price for his moment of madness; he was banned from playing rugby union for life, though the ban was later reduced to five years – not that it made much difference. Brennan retired before the ban was announced, and continues to lives in Toulouse, where his pub is still a going concern – no word on whether Bamford’s dropped by to sample the wares recently.

Out of control – four times that mascots went wild