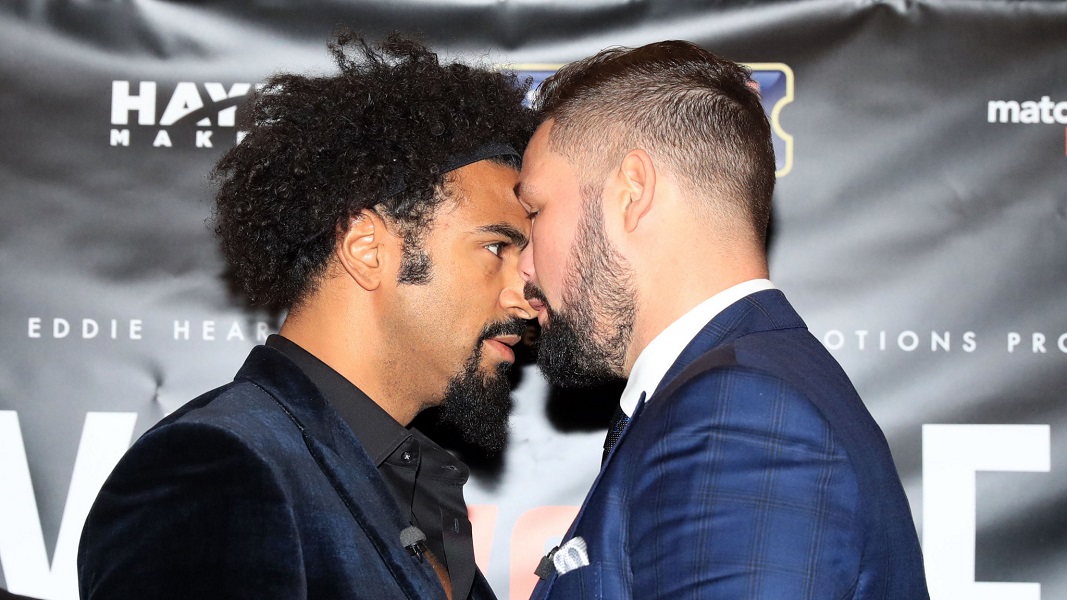 The British public’s insatiable appetite for a domestic dust-up, mixed in with a generous helping of bad feeling is once again fed this weekend, as David Haye and Tony Bellew meet in a heavyweight clash on Sky Box Office.

We haven’t even got to the final press conference, yet both men have traded insults at such a rate that we’ve even reached the low point of Bellew bizarrely referring to Haye as ‘SpongeBob SquarePants’. (Who said the heavyweights were the ‘baddest men on the planet’?!?)

Well if all the drama is distracting you in finding some value, fear not. We’ve put together a handy guide to help you pick apart the most common claims you’ll hear this week. Who knows, we might even help you cover the £16.95 pay-per-view fee!

With David Haye and Tony Bellew we’ve been here before and the reality with both men is that the bite has not always matched the bark. Tony Bellew and Nathan Cleverly’s 2014 rematch saw a build-up every bit as acrimonious as this one, before delivering one of the more painfully dull viewing experiences in recent memory. For Haye, we got no punches for the first 3 rounds of his bout with Audley Harrison despite a feisty build-up. A fight so bad it put Sky out of the PPV market for two years!

In both men’s defence, their dance partners were at least equally culpable in the failure to deliver on the hype those nights. Haye did go on to clinically dispose of Harrison and Bellew has recently delivered drama by getting up off the canvas to put away Makabu for the cruiserweight title.

If you do buy into this being a slug-fest, then 6/1 on both men being knocked down may be interesting. More likely in my book however, would be 2 knockdowns in total, currently at 11/8. Odds would suggest Bellew is the man who’ll finish the night on his back and while he’s certainly game enough to get up once, Haye’s track record suggests he’s unlikely to take more than two attempts to finish things.

This is a line we’ve heard more than once already in the build-up, but more often than not it’s coming from the Bellew camp. In Haye’s case, this statement is accurate. He boasts an 87% KO record and while none of these have come against stellar heavyweights, finishing Chisora and Ruiz early as well as being the only man to wobble seven-foot Nikolay Valuev definitely shows he can bang.

Bellew on the other hand has more question marks over his power. Despite operating at a lower weight class for most of his career, Bellew’s knock-out percentage is only 58%. While he has stopped six of his eight opponents at cruiserweight, you’d have to question whether the Liverpudlian can do what a legitimate heavyweight in Wladimir Klitschko couldn’t against Haye.

If Team Bellew are right and this really is a case of whoever lands first wins, then unfortunately it’s unlikely to end well for them. The value here is in Haye to win inside three rounds at 7/4… or how about Haye to stop Bellew inside sixty seconds at 28/1?

Well you can’t really argue with this. Haye really did scrape the barrel when choosing his two 2016 comeback opponents and despite them being at heavyweight, neither were remotely close to Bellew’s level. His team have also been pretty clear on the fact that after they’ve won on Saturday, then a mega-fight with Anthony Joshua is what they’re after. Don’t be surprised if Eddie Hearn already has Wembley provisionally booked for late Summer!

The natural follow on from this view is that Haye will pose an early threat but ultimately run out of steam after six rounds. The party lifestyle he led in his ‘retirement’ catching up with him in the same way it did when taking his first professional loss to Carl Thompson back in 2004. Not so much knocked out as knackered. Bellew has referred to that loss numerous times in the build-up and it is common knowledge that he’d ideally like to take Haye into the later rounds to test that gas tank.

While Bellew wouldn’t be wrong in believing this to be his best chance of victory (‘The Bomber’ to win by stoppage between 7-12 is currently 16/1) backing an outcome based on what happened to an eleven fight novice nearly thirteen years ago would be a brave move and the opposite may in fact be the bet of the night.

Bellew is almost certainly going to try and avoid tasting Haye’s power early. A tactic he tried to employ against power-punching Adonis Stevenson before being stopped in the sixth round. Haye has also shown, most notably against Harrison, that he’s more than happy to be patient in waiting for his openings, even if that means throwing no punches at all for long periods. If that scenario plays out this weekend, then at some point Bellew is going to have to start putting pressure on the Bermondsey man to try and make him tire and that is when Haye can strike. Haye to win by stoppage between rounds seven and twelve is currently available at 13/4 and that’s where my money would be. A £10 bet gives you a £42.50 pay-out which will cover your pay-per-view view cost, a pizza and leave some change to spare!

For all the odds on this weekend’s fights, visit 32Red.com/sport. If you’re looking to have a different kind of flutter, be sure to check 32Red Casino for a fantastic range of slots and table games.