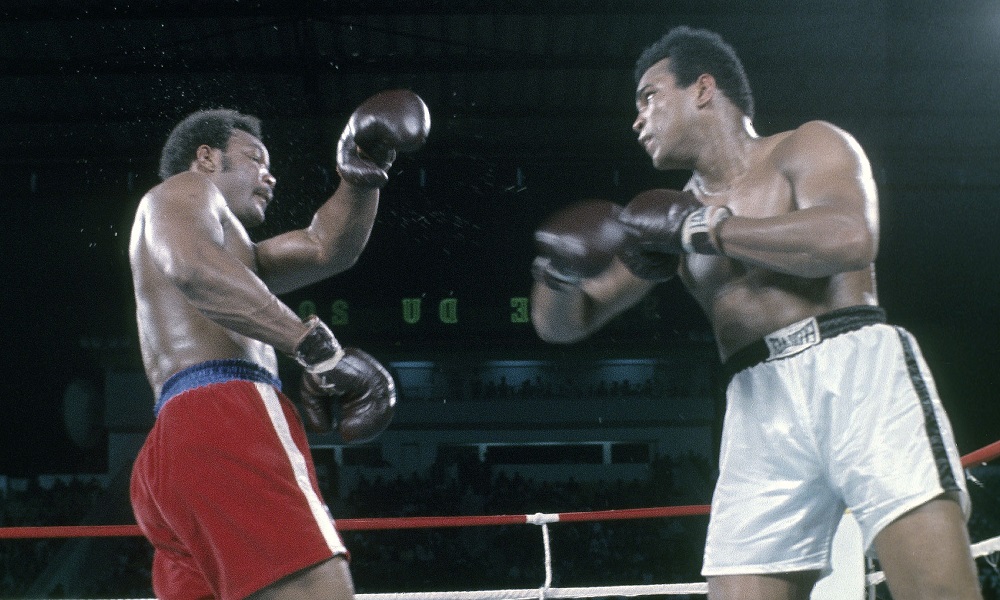 Anyone who witnessed the video of Mike Tyson’s recent training session knows that even at 53 years old, Iron Mike is not a guy you’d want to have a disagreement with.

At the height of his powers Tyson was the most fearsome of boxers, an unstoppable combination of speed and strength that often left the opposition quaking.

Now Mike is planning a return. The heavyweight boxer is reportedly contemplating taking part in one or more three-round bouts, for charity; yet fellow retired boxer, Oscar De La Hoya, insists even now that “If he trains for 12 rounds Mike will knock out any of today’s leading heavyweights.”

Tyson Fury v Mike Tyson? It sounds crazy, but who knows. What is for certain is that this is a sport that’s been able to lure its veteran champions out of retirement before; here are some of the more notable comebacks in boxing.

A world heavyweight title winner during his first stint in boxing as a young man, Foreman fought the legendary Muhammad Ali in the Rumble in the Jungle in 1974 – more on that later.

But just three years later, Foreman would retire from boxing at the age of 28, for a colourful career change; the Texan had found God, it seemed, becoming an ordained Christian minister. That’s quite a leap for a man who admitted in his autobiography that he had once considered hiring a hitman to take down someone he considered to be an enemy…

Foreman’s faith in God continues to this day, and he still preaches at a church in Houston, Texas. But it didn’t prevent him from returning to the ring a decade after he had walked away from boxing. In 1987, at the age of 38, Foreman returned to the fight game, winning nine fights in 1988.

But Foreman’s greatest triumph, second time round, came in 1994 – when, at the age of 45, he defeated Michael Moorer with a late knock out to become the oldest fighter ever to win a World Championship. He retired a couple of years after that, though it turns out that the boxing has been less profitable than endorsing kitchen equipment; according to various reports, Foreman is said to have earned around $200 million from the George Foreman Grill. Goddamn…

Named the “Fighter of the Year” by Ring magazine in 1979 and 1981, in 1982 Leonard’s career was put on hold after he discovered he had a detached retina in his eye. Though Leonard successfully underwent surgery to correct this eye problem, the boxer nonetheless decided to call time on his profession, at the age of 26.

Yet just a year later Leonard decided to make a comeback – a decision that attracted criticism from fans and media alike, with a general feeling that Leonard was taking unnecessary risks with his eyesight.

Leonard’s decision to fight again ended with victory against Kevin Howard in May 1984, but although he won, the fight was hardly an unqualified success; Howard knocked his opponent down, the first time in Leonard’s career that had ever happened. And after the fight, Leonard surprised everybody by announcing, once again, his retirement, saying: “I realised that I couldn’t do the things I used to be able to do. Something was missing.”

But there was another twist in this tale. In 1986, Sugar Ray had a change of heart, deciding to make another return – this time against Marvin Hagler, a considerably more challenging opponent than Howard.

The bout took place at Las Vegas’ Caesar’s Palace in 1987, with Hagler the clear favourite. In fact, he started slowly, with Ray looking the superior fighter for the opening rounds. Still, Hagler came back into the fight as Sugar Ray tired, and the eventual split-decision win – awarded to Sugar Ray – is one that still divides opinion to this day.

Nonetheless, Leonard’s victory was an unforgettable moment in boxing history, with Ring Magazine calling it the upset of the year.

Okay, this wasn’t a comeback from a retirement, but it was still a significant lay-off. Having won the World Championship at the age of 22, a couple of years later in 1967 Ali was drafted to serve the military in the Vietnam war – an obligation that he refused, famously saying “I ain’t got no fight with no Vietnamese”.

Given what we know about that pointless, harrowing conflict now, Ali was on the right side of history from the start – but that didn’t make much difference to the authorities, who stripped him of his world heavyweight title, suspended his boxing licence and sentenced him to five years in jail.

Though Ali appealed the sentence and didn’t do any jail-time, he was unable to fight until 1970. After a couple of unexceptional wins, Ali fought Joe Frazier in 1971 in a match billed as the Fight of the Century – and Ali lost on points, the first time in his professional career he had been defeated.

Further fights followed, Ali winning six fights in 1972 – but also losing to Ken Norton in 1973, who broke Ali’s jaw and left “the Greatest” seriously considering retirement. Instead, Ali fought Norton again that year, this time winning – and paving the way for a 1974 rematch with Joe Frazier. Ali would win this second encounter by unanimous decision – and in doing so, set the scene for arguably Ali’s most famous victory.

The Rumble in the Jungle took place in Zaire and saw 32-year-old Ali take on heavyweight champion George Foreman, who had previously taken out both Frazier and Norton in second round knockouts. The consensus seemed to be that the ageing Ali was heading for an ass-whuppin’.

Instead, Ali used the suicidal-sounding “rope-a-dope” tactic to tire his younger opponent out, leaning against the ropes, taunting his opponent, focusing on defence rather than attack. And in the eighth round, Ali, who had been enduring a flurry of blows from his opponent and looked like he might be on his last legs himself, roused himself to drop Foreman to the canvas, and pull off the biggest upset of his career.