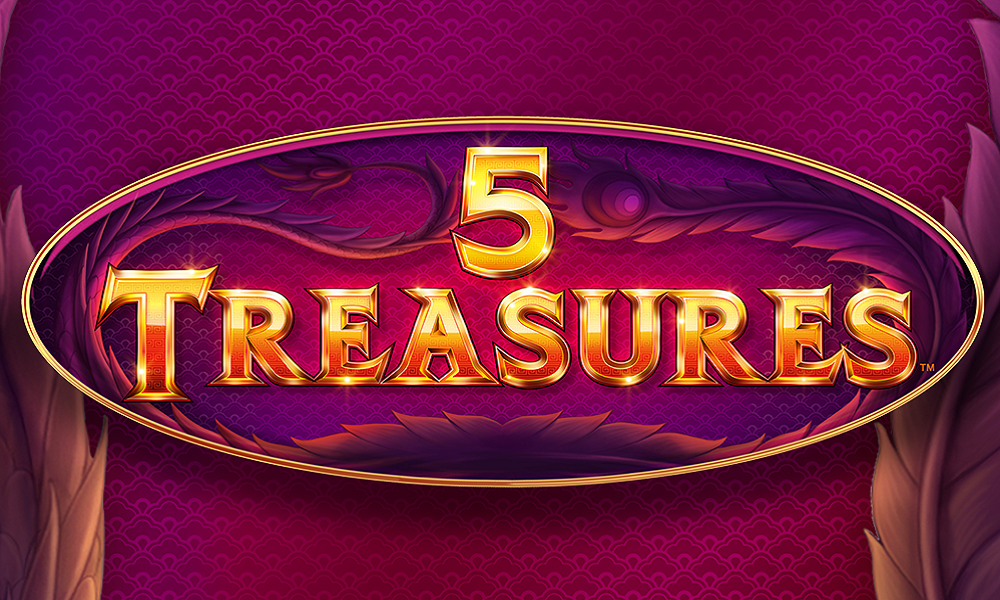 5 and kicking? New from SG Digital comes 5 Treasures, a five-reel, 243 ways release with art inspired by ancient Chinese artistry, plus four jackpots and a rather smart Free Spins variant that’s worth a second (and third, fourth and fifth) look. Play 5 Treasures now

With reels littered with arcane Asian iconography, from stone turtles to statuettes of koi carp, 5 Treasures also features Wilds in the shape of Fu Bat symbols, which can substitute for any other symbol.

You’ll also want to keep an eye out for the Red Door symbol – if three or more of these items appear on consecutive symbols from left to right, you’ll land a payout as well as being awarded the Free Spins feature.

First, you’ll need to choose one of five Free Spin modes – each features one specific symbol (in addition the the usual symbols) in varying quantities – so, you choose the Koi, and there are a total of 128 koi symbols across the five reels. At the other end of the scale, select Dragon, and there are significantly fewer Dragon symbols – 88 across the reels.

By choosing the Free Spins with fewer symbols, you’re potentially giving yourself a lesser chance of making a winning combination – but the trade-off could be worth it, because if the winning combo does come up, it’s potentially worth more.

Straightforward enough, and with five different variants it could pay to experiment to figure out your favourite approach.

5 Treasures’ other main element are the jackpots. Each time a Fu Bat symbol lands, coins will be added to the pot above the reels. With four jackpots ranging from mini, minor, major and grand, there’s plenty of scope here for a sizable payout – and if the pot lid closes, it will activate the Jackpot feature.

Here, 12 coins appear on the screen, and you’ll need to select your choice of coins – the idea is to reveal a Fu Baby. Reveal three matching Fu Babies, and one of the Jackpots will be yours.

Ready to Kick down that Red Door, then? Just Fu it…

5 Treasures is released on 1st February 2021 – in the meantime, visit 32Red Casino to check out a wide range of table games and slots to keep you entertained for now!

Out now: Book of Ultimate Infinity
Out now: Fruit Snap