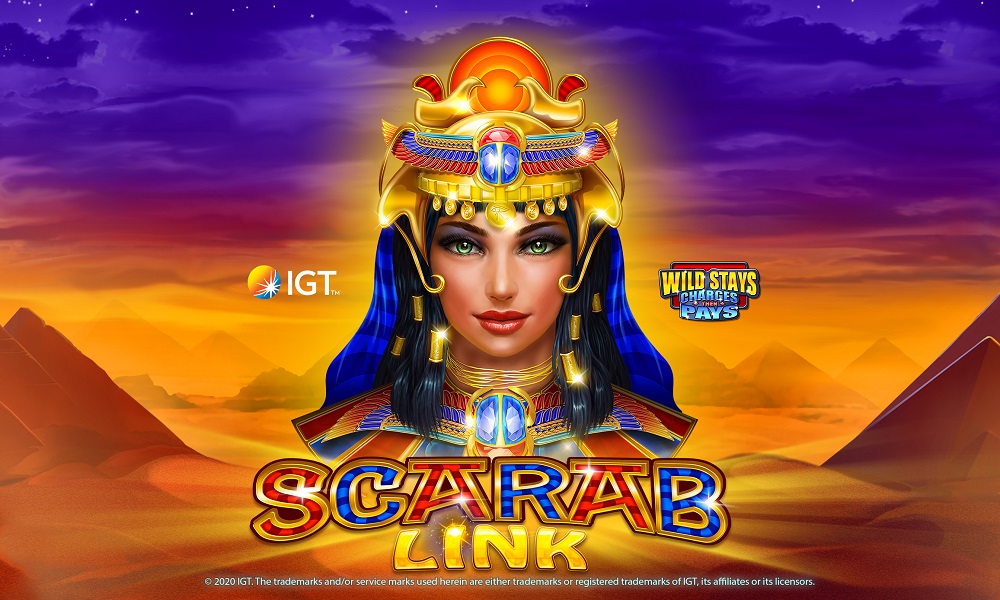 Ancient Egypt. The cradle of civilisation. Home to such iconic constructions as the valley of kings and the inscrutable sphinx. And also, quite a popular thematic inspiration for slots. Play Scarab Link now

Yes, it’s fair to say that Scarab Link is attempting a fresh spin on well-worn territory here – so does this new release from IGT succeed in standing out from the Egyptian also-rans? Indubitably.

This colourful, quirky slot offers a head-spinning, euphoric adventure into the unknown, as a beguiling High Priestess beckons you into the temple – where you’ll find a 4 x 5 reel set up, alongside 50 paylines, and a Grand Progressive jackpot.

That’s not all; the Scarab symbols are important here; collect them to release the Wild Stays Charges Then Pays feature. Yep, that’s what it’s called. Sounds less like an evocatively titled feature than a penalty notice you might find in a car park, but make no mistake, there’s plenty of potential to deliver some mighty fine payouts.

When Scarab symbols land on the reels, they’ll be locked in place until the feature eventually activates, with the Scarabs transforming into Wild symbols – hopefully, delivering a winning combination in the process.

There is also a Hold & Respin bonus which kicks in when three Scarab Link scatters land on the centre reels. You’ll initially be awarded three respins, and any cash values that appear during a respin will remain locked in place until the feature is finished.

Each time a prize value or jackpot symbol lands on the reels, the respin counter is reset to three. If you can fill all 20 positions on display, you could land that Grand Progressive Jackpot. There are also major, minor, and mini pots to be won.

And if you don’t fill every position, the cash values that have landed on the reels will be added up into one total payout which could still amount to a pretty tasty sum.

Egypt may be renowned for its unfathomable enigmas, but getting your head round this release really isn’t a big struggle. Easy to pick up and play, and packed with terrific potential for prize payouts, this is no weak Link. This Scarab-based spectacle is scorching hot…

Scarab Link is released on 30th April 2021 – in the meantime, visit 32Red Casino to check out a wide range of table games and slots to keep you entertained for now!