Dig for victory! Like some intergalactic Arthur Scargill, venture into the most far flung reaches of the universe in order to achieve your lifelong dream of interplanetary spelunking. Play Space Miners now

That’s the premise of Space Miners, the new one from Relax Gaming. Blending a gaggle of UFO-based alien life forms with a videogame aesthetic, Space Miners looks and feels like a fiendish puzzle game. And you’ll even find power-ups to help you win.

This six reel slot features up to 10 rows – and as many as a million ways to win! The amount of reels you have access to will increase as you destroy blocker tiles, opening up more space for winning lines.

Land a win, and you’ll be awarded a respin. Meanwhile, any blocker tile next to a winning symbol will also be destroyed, giving you access to more of the slot’s rows.

Score more consecutive wins, and you’ll potentially also access an even greater playing area. But when the respins end, the display will revert to the base level of six reels by three rows.

If you can destroy the powerup blockers, you’ll also trigger their power, which comes in a number of different varieties. 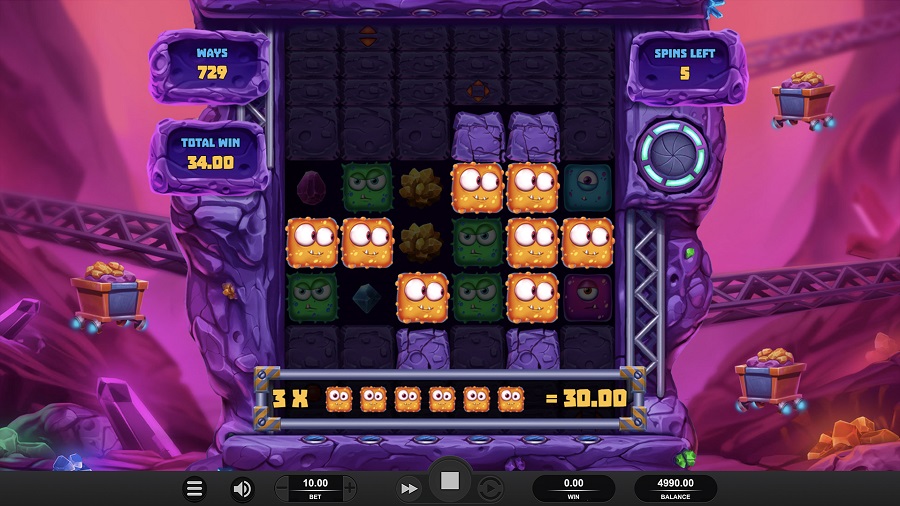 The Cross symbol will destroy both vertical and horizontal blockers. And if you land a 3×3 power-up, it will get rid of all blockers within a 3×3 area of the symbol.

Otherwise, look out for Wilds, which will always expand to fill open positions on the reel. Meanwhile, if you can land three Bonus symbols in a single spin, you’ll trigger six Free Spins.

In the Free Spins, you’ll still seek to open up more of the game’s rows. But when you do so, the rows will remain available for the duration of the Free Spins, regardless of any wins you achieve.

You can also earn additional Free Spins by collecting more bonus symbols, while more Power Up symbols will appear while Free Spins are active too.

With a colourful, appealing visual style and a satisfying style of play that is highly volatile there’s clear possibilities for some memorable payouts here. Not since the heyday of Manic Miner have we felt so excited about a burrowing-based adventure. This must be the Space…

Space Miners will be released on 9th February. In the meantime, visit 32Red Casino to check out a wide range of table games and slots!

Out now: Adventures of Captain Blackjack
10 top online casino games you should be playing