The Great Albini 2 out now

So can the grand illusionist conjure up a suitably spectacular slot experience this time round?

In this new release from Microgaming and Foxium, you’ll find five reels and four rows of trick-themed tomfoolery, as Albini and glamourous assistant Lily add some abra-cadabra-based excitement to the proceedings.

In the base game, you’ll definitely want to look for the Collect Feature. Money Gem symbols will appear on the first four reels, with different coloured gems awarding various sizes of prizes.

These can range from 1x-9x your stake on the lowest value blue money gem, to as much as 50x on the red gem.

If the Collect symbol lands on reel five, the total amount of money gem symbols currently on the reels will be collected. 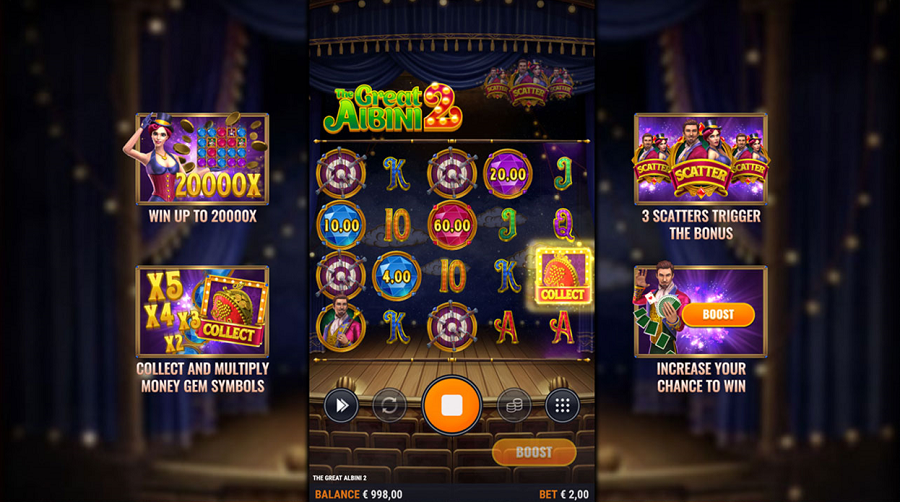 And what’s more, collector symbols can also feature multipliers of between 2x and 5x, which could significantly increase the amount you win.

There’s also a Bonus Feature that offers plenty of spell-based spectacle, too. Landing three scatters in a single spin will trigger the bonus, and you’ll be awarded three bonus spins for starters.

On each spin, you’ll be aiming to land money gem symbols – every time a bonus spin delivers a new money gem, the bonus respin count will reset to three.

Any money gem symbols that land on the reels will stay in position for the duration of the bonus game.

And as well as the money gem symbols, there other symbols present during the bonus spin include Albini Multipliers and Lily Extra Spin symbols, which can increase the amount you win, or give you an extra Free Spins (you probably figured that out yourself).

What’s important is trying to land as many money gems as you can. That’s because if you can populate all 20 reel positions with the gems, you’ll win the Grand Prize – which is 20,000x your bet.

Up for some slot-based hocus pocus, then? It’s safe to say that Albini has pulled a rabbit out of a hat here…

The Great Albini 2 will be released on 3rd March 2022. In the meantime, visit 32Red Casino to check out a wide range of table games and slots!