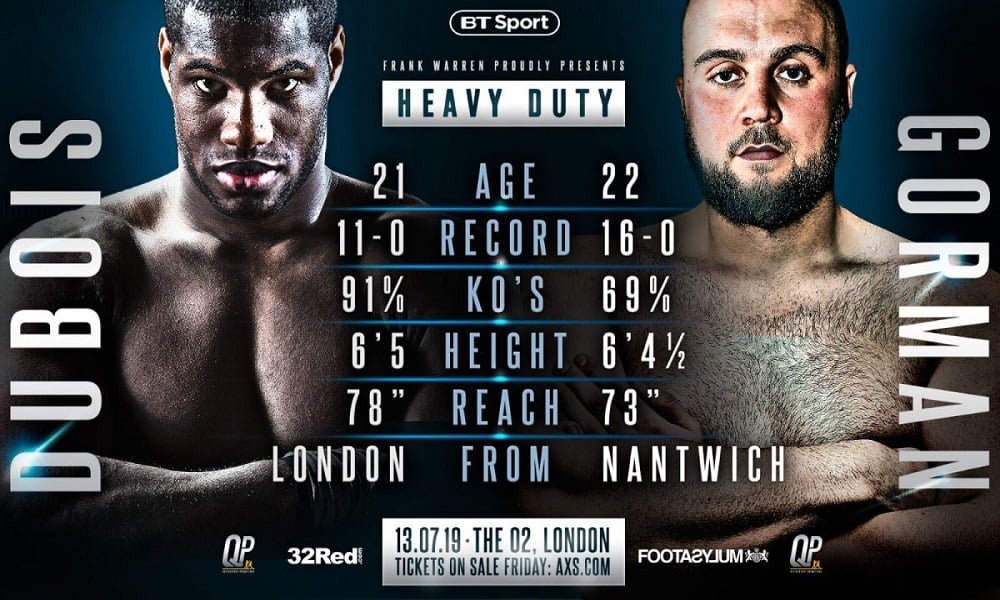 All eyes will be on the O2 Arena this weekend as the explosive Daniel Dubois and quick-fisted Nathan Gorman meet in an eagerly anticipated heavyweight title clash. For all the latest fight odds, visit our sportsbook. The pair share a long history and as well as the prestigious British title belt, bragging rights will be on the line when the two unbeaten youngsters finally collide.

On the undercard, Joe Joyce aims to continue his rapid rise through the world rankings by beating former world title challenger, Philadelphia’s Bryant Jennings, in another mouth watering heavyweight clash.

It is a high pressure fight which has captured the public’s imagination but we found 32Red ambassador, Dubois, and Ricky Hatton protégé, Gorman, in relaxed and confident mood ahead of the biggest night of their lives.

How does it feel to be headlining such a big show in a fight that isn’t only for the prestigious British title but also a kind of semi final ahead of a potential fight with the winner of the other heavyweight fight on the card, Joe Joyce v Bryant Jennings?

DANIEL DUBOIS – Yeah. It’s a good show. It’ll be a good bill and it’s going to be a good, entertaining night for boxing fans in general. Not just heavyweight fans.

I think Joe may end up taking a different route. I know he’s mentioned that he might go for a European belt after this. I don’t know really, I’m just focused on my own fight and making sure I win.

NATHAN GORMAN – Me and Daniel are headlining the show for the British title, Joe and Bryant are battling it out too and that should be a tremendous fight. It’s a stacked card too and for it not to be PPV is a bonus. A lot of people have been wanting to see this fight and now it’s happening.

The winner of me and Daniel could fight the winner or Joe and Jennings. Maybe we’ll push on in a different direction. Who knows? Boxing can be a weird and peculiar sport. Who would have thought that me and Daniel would be fighting as soon as this? It brings the best out in each other. Our styles could clash and it could be a barnstormer or it might be pretty one sided. Time will tell, hey?

How would you rank the four heavyweights headlining the bill?

The two heavyweight fights have something for everybody. Daniel is the hyped knockout artist, Nathan is the quick fisted combination puncher, Joe is the relentless man in a hurry and Bryant is the experienced head searching for another shot. How do you see your role in the mix?

DD – I think I’m still discovering new things about both my boxing and my character. Even now things are just coming to light. I’m a work in progress and I’ve been like that for, I don’t know, man, over 10 years now or for as long as I’ve been boxing. It’s just an ongoing process and one day I’ll definitely fulfil my potential. That’s what I’m striving to do. I want to be the best I can be.

NG – I’m going to say that I’m the dark horse. I think a lot of people sleep on me. I imagine that I’ll be the underdog going into the fight and that’s good. I want to be the underdog. All of the pressure is on his shoulders. He’s the hyped up golden boy who has to perform. I’m just a lad from Nantwich aren’t I?

After years of the typical upright heavyweights ruling the division we are in an era where fighters like Tyson Fury, Andy Ruiz and Deontay Wilder – boxers with more unorthodox and unusual styles – now rule. Why do you think there has been a change?

DD – I think that as long as your mindset is right and you’re a decent athlete, you can go far in this sport. In the heavyweight division you do need to be a decent athlete but you have to fight according to what your best assets are. The division is really up for grabs and on any given day things can change. It’s interesting.

NG – You’ve got all different freaks of nature! I don’t know really, maybe it’s a just because it’s a different era. Maybe the training methods are different. The time of typical 6ft 2 or 3 inch tall and 16 or 17 stone heavyweights throwing the big monstrous back hand is done. Now we’ve got all different types of fighters. Ruiz fights like a typical Mexican, Wilder is so unorthodox. You just never know where those hooks are coming from and you don’t know what Tyson is going to do full stop do you?

A lot has been said about the hundreds of rounds of sparring you shared but you have both changed as fighters since then. Which of you has had the harder job finding the right sparring and preparing for the fight?

NG – I one hundred per cent know for a fact that finding sparring with my style is going to be extremely hard. I can find an Eastern European with Daniel’s style. When I throw punches I throw no less than 3 or 4. I’m not your typical heavyweight. I throw combinations and I can keep that up for 12 rounds.

Why do you win on Saturday night?

DD – Because I work hard. But more than that, I’ve definitely got the tools to do the job. On the night, once again, I’m going to show my talent and what I’ve got. I’m going to go to another level.

NG – I’ll want it more and my style beats his. I genuinely believe our styles will clash and mine will beat his.

DD – I don’t know. I couldn’t really pick a winner in that one. Joe has got the momentum right now so it seems to favour him but it really could swing either way.

NG – I’m going to go for Joyce but I’m not going to sleep on Jennings. He’s a very good fighter.