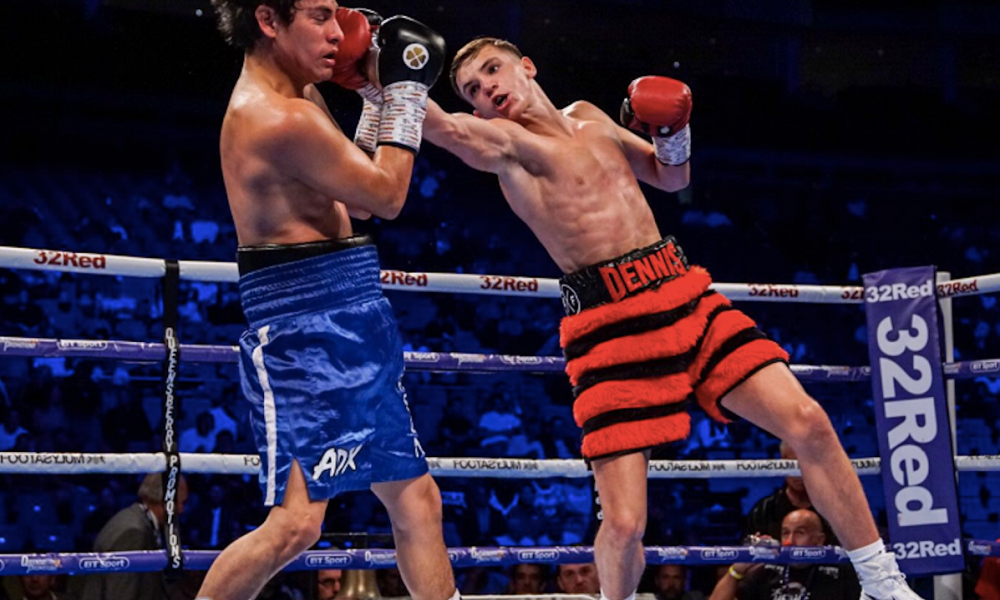 Dennis McCann exclusive: People want to see me – I’m not a basic fighter

Dennis McCann remembers the last time he lost a fight.

“Yes, like it was yesterday. It was in Sheffield boxing for England. I’d beaten the kid three times before and I beat him afterwards. His name was Stephen Black from Scotland. To be honest, he robbed me quite badly. It’s still a loss though,” McCann (3-0, 2 KO’s) told 32Red.

“I don’t like that feeling and I don’t want to lose again. I’ve lost one round since then.”

Since bursting onto the scene back in May, the nine time amateur champion and European bronze medallist has made the transition from the low-ceilinged working mens’ clubs and cold, Eastern European sports halls of the amateur circuit to the arenas and bright lights of the professional world appear seamless. For an 18 year old to have made himself a staple on big televised shows after just three fights shows just how much of an impact he has made.

“100% but you also have to remember that I’m delivering and if somebody is delivering then you’re going to want them on those shows,” he said. “I’m not saying it in a cocky or horrible way but I’m one to watch according to a lot of people and I’ll sell a lot of tickets. People want to see me.

“I’m loving it. I like wearing the smaller gloves. I stopped people in the amateurs but you can’t knock them out with those big padded gloves on, especially at the smaller weights. I’m enjoying this a lot more.

“They [top amateur coaches] try to change your style to that basic, boring style. I’m not a basic fighter. Look at Prince Naseem. Look at the great fighters, none of them were basic. Boxing is all about angles. I’m not one for a strong jab and one-two after one-two. It’s boring. Nobody wants to see that.”

But people do want to see Dennis McCann. His fearless attitude has brought a smile to the most cynical faces and since swapping the famous bottle green vest of the Repton amateur club for his red and black hooped trunks, he has more than lived up to one of the more obvious – but most apt – nicknames in British boxing. ‘Dennis The Menace’ is a constant ball of youthful energy who stalks the ring looking for trouble and it isn’t too difficult to imagine an even younger McCann patrolling the streets with a catapult looking for mischief.

“I’ve been called it for years. I was always a menace,” McCann laughed. “I was a right little bastard a few years ago. On Halloween I’d get eggs and throw them at houses and that. My dad caught me one day so I haven’t done that since I was about 12. I got arrested twice when I was 11 years old for being a little rebel. Silly stuff really but I’m very mature these days.”

It was his love of boxing that got McCann into the most trouble. As an 11 year old, he would pack his bag and make the two hour train journey into Central London to train. For McCann, the admiration and accolades he received for his boxing were worth a bit of close attention from his parents when he finally walked through the door.

“What I’m doing now has always been a dream. I reckon I was five years old when I decided I wanted to be a boxer.

“My mum was never too keen about it but really they didn’t mind me boxing – my older brother was a good boxer – but the gym was too far away and I used to have to get the train. That was the reason they didn’t want me to go. There was great sparring at the Repton so I wanted to go there.

“I’d get the odd slap but what can you do? Look where I am now.

“I used to dominate people. I was so good that I never used to really have any hard fights. People used to love me. They’d always want photographs with me afterwards and if there were two rings going on at the same time then everybody would be watching me. I absolutely loved it. Sometimes in a fight I’ll talk to them a bit. If they get upset they might start running into you a bit then you can make them miss even more.”

Lots of young fighters fit their fledgling boxing career around a job but for most the 9-5 is a means to an end rather than the priority. Any hopes of professional advancement are generally concentrated on progressing through the professional ranks rather than climbing the pay grades at work. A steady weekly wage does provide a level of comfort and security but it is the hope that boxing will take them away from the routine that keeps them going. Despite his tender years, McCann is fully aware that the reality of a normal life isn’t for him.

“I’m a very mature 18 year old. I dropped out of school at 11 years old and was going to work every day with my dad. I’ve always been around older people. Most 18 year olds only want to party but after my fights I’ll go for a bit of food and the longest I’m out of the gym is about a week,” he remembered.

“I was doing roofing and labouring with my old man. I did a bit of everything really. I was quite clever and I even wrote out his contracts and sent his e-mails. It really stopped me from messing about. I used to lift the tiles up on the roof and mix cement for them.

“Summer or winter, it’s horrible in both to be honest. That’s why I want to be very successful. I want to take my time and win everything I can so that I never have to do a day’s work again in my life.”

McCann may still look and sound like a naughty school boy but if there is a hardness to his words, it is matched by his actions. He has already spent enough time looking into the eyes of grown men whose dreams and ambitions were buried on building sites to know that he doesn’t want to spend the next 40 years scaling ladders. Whilst other teenagers text their way through the drudgery of the daily grind until they can escape into another world at weekends, McCann has already realised that they are searching for the kind of high that he gets to experience for a living.

“They take that stuff because they have nothing else in their lives. They’re trying to escape working in an office every day. Plus, my dad would break my legs if ever found out I was doing that. Me and my dad are quite close and he knows I’m too clever to get involved in all that.

“I don’t really like alcohol at all. I’ve probably drank once at my brothers wedding. I’ve never took a drug and never smoked a cigarette in my life.

“I’ve dropped a few friends lately. They weren’t really my friends, they were trying to get me to go out all the time so I just deleted their numbers. Everybody knows I’m the hardest trainer and most dedicated fighter you’ll get. I do train very hard. If you start slacking in training it’ll show up on fight night. I’m a strong believe in that.

“It’s all down to your friends and who you hang around with. That’s why I’ve dropped a couple to be honest. They don’t want to see you doing good. Half of them pretend to be your mates but they aren’t really.”

This weekend, the McCann roadshow rolls onto its grandest stage yet and he has a special performance planned for those in attendance at the Royal Albert Hall. For all the latest fight odds, visit our sportsbook.

“I’ve got a kid that’s been stopped once in a year and a half but you can expect him to get stopped again. He’s knocked out a few unbeaten kids but he won’t be knocking me out, you can believe that.”