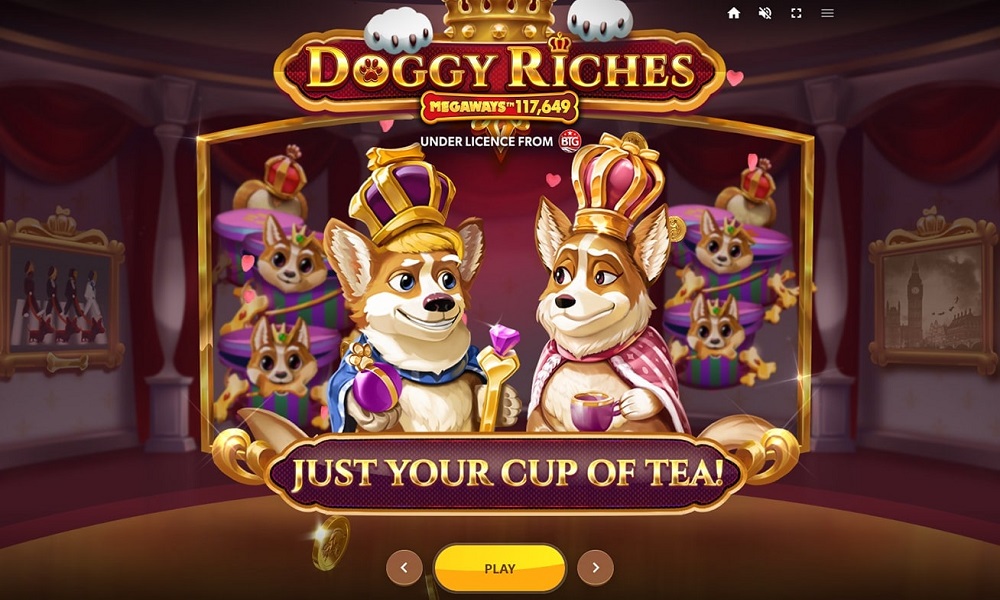 Down, boy! Meet the most aristocratic pooches in the history of hound-kind. Play Doggy Riches Megaways now

Enter Doggy Riches Megaways, the new slot from Red Tiger that dares to imagine the royal family reborn as a couple of cosseted corgis.

And with a jewel-encrusted sceptre in the shape of a bone and made of solid gold, this canine king is richer than a Russian oligarch. And thankfully rather cuddlier too.

You may find yourself charmed by these lucky lapdogs. Or you may alternatively think that Fido should get off the throne, sharpish. Either way, don’t fret – it’s not just the dogs that are top pedigree here.

Because this is a Megaways slot, the six reels and seven rows can offer a maximum 117,649 ways to win.

And after each win, the Chain Reaction mechanic means the symbols that formed your win will vanish. They’ll be replaced by new symbols that can drop in, potentially creating more winning combinations. 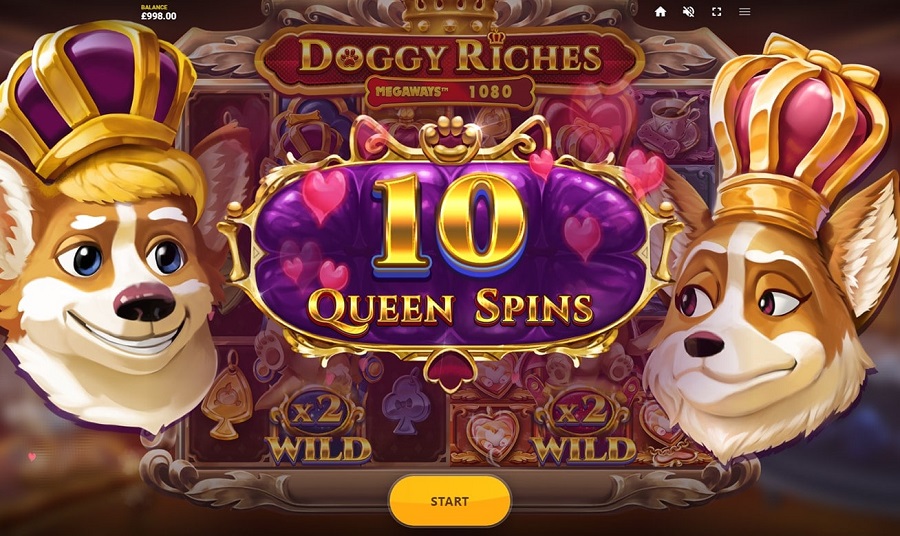 When it comes to wins, the Royal Corgis are definitely top dog. Acting as Super Wild symbols, the Corgis will fill an entire reel if they land. They also include a 2x multiplier that will apply to any win which the Wild is a part of.

If both the King and Queen Corgis appear in the same winning combo, their multipliers will be applied to each other, too. The King Corgi is found on the second reel; the Queen Corgi is located on the fifth reel.

When they do appear in a win together, the Corgis will also remain on the reels during the next spin. Again, that offers you the chance for some further pooch-based payouts.

That’s not the end of the Corgi-based bonuses, though. If both Royal Corgis land in the same spin, they’ll trigger 10 Queen Spins, with the noble dogs remaining in place for the entirety of the bonus round.

There’s also a Rising Multiplier that increases with each win you land during the Queen Spins, and which can climb as high as 20x.

Watch out for puppy love making an appearance, too. The Royal Corgis can send love hearts to one another during the spins at any time, triggering between two to five baby corgis landing on the reels – these Baby Corgis all act as wilds which will substitute for other symbols.

If you’re in the mood for a slot that combines cute visuals, plenty of potential for payouts, and a theme of tail-wagging royalty, Doggy Riches Megaways should have you howling for more. This slot will be live and unleashed very soon…

Doggy Riches Megaways is released in March 2022. In the meantime, visit 32Red Casino to check out a wide range of table games and slots!