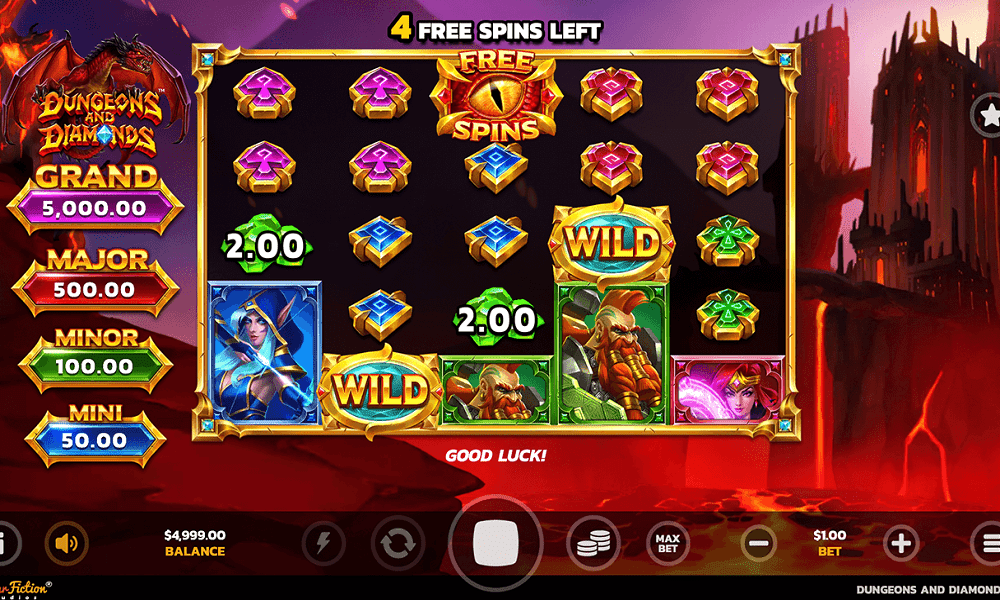 Dungeons and Diamonds slot out now

Wizards, warlocks and worse lurk in Dungeons and Diamonds, the fantasy-themed thriller that’s heading to 32Red imminently. If you just can’t get enough when it comes to mystic runes, malignant foes and abundant beards this slot adventure is sure to appeal. Play Dungeons and Diamonds now

In the enthralling new release from Microgaming and PearFiction Studios, join a quartet of intrepid adventurers as you seek the treasures within a fearsome dragon’s lair.

Across a five reel, five row grid, explore a sinister dungeon on your quest for glory.

As far as presentation goes, there’s no doubt this is a handsome beast. Striking artwork graces the reels, as exciting lighting effects and animations give the action a little extra oomph.

In raw gaming terms, there’s plenty to like, too. Forty paylines and a high volatility mean there’s potential for some handsome wins. Particularly if you can nab the Wicked Wizard’s Jackpot, which offers as much as 5,000x your bet.

For your shot at the Jackpot Bonus game, just combine a Jackpot Symbol with an Instant Collect symbol.

In the Bonus game, you’ll choose from a range of pouches, revealing one of four jackpot types within – Mini, Minor, Major or Grand. Pick three of the same symbols and you’ll win the corresponding jackpot. 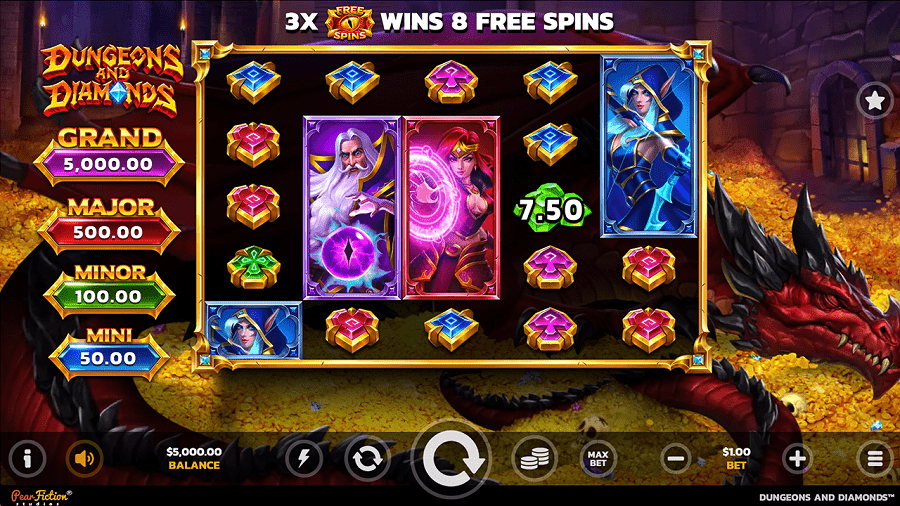 In the base game, you’ll find Wilds that can appear on any reel. And Stacked Reels that see the game’s high paying character symbols taking up plenty of on-screen real estate.

There’s also an Instant Collect feature that can pay out the total value of all gems in a win line, if the Collect symbol lands on the fifth reel.

If the Respin Collect symbol lands, the reels can be respun too. Regular symbols will be removed from the reels, with only gem symbols remaining. That means you could theoretically fill the entire display with gems.

There’s also a Multiplier Collect, where the value of all gems on the reels will be multiplied by the displayed multiplier, up to 5x. All the Collect features are available in both the base game and during the Free Spins, too.

As for the Free Spins themselves, these will be triggered if you can land three scatters in a spin – at which point you’ll be awarded eight Free Spins. During the Free Spins, the Collect features occur more frequently too, as does the Wicked Wizard Jackpot bonus.

Ready to dice with this Dragon – and nab the scaly bugger’s diamonds? Not long now til you can explore this Dungeon for yourself.

Released on 26th April 2022. In the meantime, visit 32Red Casino to check out a wide range of table games and slots!

Continue Reading
You may also like...
Related Topics:Dungeons and Diamonds, featured