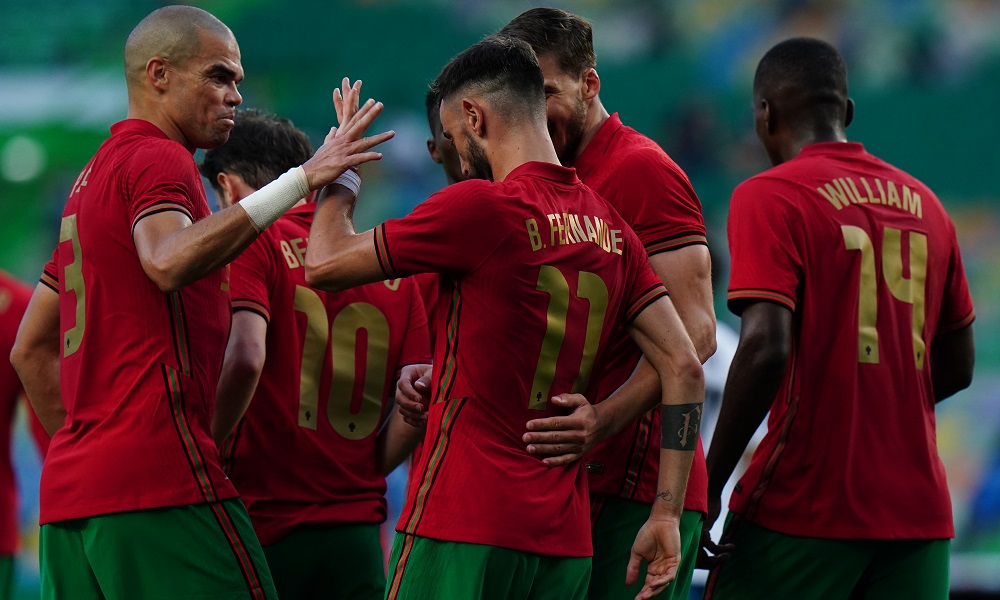 Still trying to figure out what to have a flutter on? Here’s a look at how some of the bigger sides in the tournament are set to make out (and you can find part 1 here):

The reigning European champions are 8/1 to win the Euros again – and plenty of folk like their chances. You can see why, with manager Fernando Santos able to call upon a host of top players from defenders like Man City’s Ruben Dias to inspirational Manchester United midfielder Bruno Fernandes. And, of course, big Cris.

It’s been a disappointing season for Cristiano Ronaldo, who’s Juventus side failed to win Serie A for the first time in a decade. Ronaldo’s numbers continue to be good though, with 29 goals in the league, and the 36-year-old may continue to be the main source of goals for Portugal over the next few weeks.

It won’t be a cakewalk to progress from Group F, with Germany and France lying in wait (as well as the luckless Hungarians). But if Ronaldo’s insistence on taking free kicks and penalties might not always be to the side’s advantage, who’s going to tell the Portuguese icon?

For bad or good, many of the chances Portugal carve out are likely to fall to their talismanic star. With that in mind, backing Ronaldo at 9/10 to score the most goals for Portugal seems a solid bet, even with proven scorers like Diogo Jota and Fernandes looking to get their name on the scoresheet.

Portugal have shown in the past they can grind out results in this tournament – they drew five matches en route to the final five years ago – and even if they don’t manage to retain the trophy, they are surely sharp enough to go close.

You can back Portugal to reach the semi-finals at 11/5, or to reach the quarter-finals at 21/20; that latter option would seem to be well within the team’s capabilities. If you prefer a more adventurous wager, backing them for the outright win might not be so outlandish, either.

Die Mannschaft’s formidable reputation is well deserved, with the side having won three previous European championships. The German team haven’t won this competition since 1996, however – but more worryingly, the side appear to be in the midst of a real malaise right now.

Manager Jogi Low will bow out of his role at the end of the Euros – with many Germany supporters feel Low’s exit is overdue. That’s not surprising, given Low has attempted, and failed, to rebuild this Germany team, dropping the likes of elder statesman Thomas Muller and Mats Hummel only to bring them back into the fold for this tournament.

If that suggests a coach who’s out of options, Germany clearly have reason to view this event with trepidation. Back in November, they lost 6-nil to Spain; perhaps more shocking, the German team also lost a World Cup qualifier to North Macedonia in March.

Those aren’t isolated incidents, with a 4-2 defeat to the Netherlands back in 2019. Germany at least warmed up for Euro 2020 with a 7-1 win over Latvia earlier this week, but there are at the very least doubts about this side’s ability to impose themselves as they have in previous tournaments.

This potentially struggling Germany side have also had the misfortune to be placed in the group of death (that old chestnut), alongside France, Portugal and Hungary. With three teams potentially still making it to the group of 16, perhaps the concept of a group of death is overstating things – but the bottom line is, this team would seem to be more vulnerable than they have been in past appearances.

At the World Cup three years ago, Germany lost two of their three group games, and failed to progress beyond the group stage. Could this be another underwhelming showing? Even if they squeeze through to the round of 16 here, it might be worth looking at the number of goals scored in the group stage – you can get Evens on Germany scoring under 4.5. They scored just twice in the 2018 World Cup…

Spain’s preparation for this tournament has been thrown into disarray in the last week with the news that Sergio Busquets and Diego Llorente both tested positive for COVID, forcing the entire squad to train in isolation as a safety precaution.

Coach Luis Enrique has also made a few curious decisions with his squad, choosing not to include any Real Madrid players – fair enough if they’re not performing, arguably – but also opting to name a 24-man squad despite being entitled to take 26 men to the competition.

Spain have generally looked to be in pretty good nick, however, unbeaten in their last eight internationals, including that 6-0 spanking of Germany back in November.

Maybe that says more about the German side’s regression that this Spain side’s excellence, but the team do at least have a proven goalscorer in Gerard Moreno, who produced 23 goals in La Liga for Villarreal this season. Moreno is 3/1 to score the most goals for the team.

The Dutch replaced Barcelona-bound Ronald Koeman with Frank de Boer in 2020, and it’s fair to say De Boer’s coaching credentials have come under scrutiny since then.

You may remember Frank for his wretched four-game stint with Crystal Palace in 2017; de Boer had a similarly dispiriting start to his time as coach with the Netherlands, failing to win any of his first four games in charge.

Since then results have improved, with a 4-2 victory over Germany winning supporters over to some extent – though it’s worth noting that Scotland did draw 2-2 with the Netherlands in a friendly last week, and Turkey beat them 4-2 in a World Cup qualifier back in March.

The side are without the injured Virgil van Dijk and Donnie van de Beek; the latter might have been hoping to have a good international tournament after a frustrating first season with Manchester United.

At least the Netherlands find themselves in a group with opposition that look beatable, with Ukraine, Austria and North Macedonia all unlikely to loom large in this competition. Progress past the group stage should be possible; we’re not hugely optimistic about how much further the side can go after that, though.

Memphis Depay to score most goals for his side at 5/4 looks a decent bet; Depay has scored three times in his last two appearances for the Dutch, and is coming off a strong season at Lyon, netting 20 times for the Ligue 1 side.