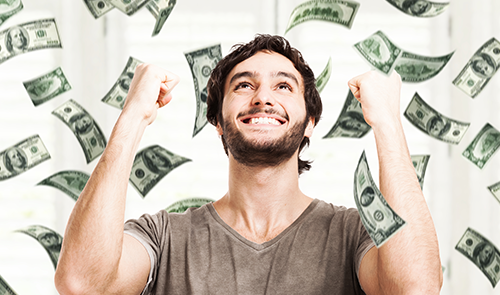 How one game could change your life: big winners and how they spent it

We’ve all dreamed of winning it big and splashing out on a wild hippopotamus (or is that just me?). But few of us have turned the dream into reality like these next four winners. Of course at 32Red we always suggest you game responsibly and never blow the lot. But these guys didn’t get the memo and lost their cash as quickly as they won it. So read on for a guide on how NOT to strike it lucky!

In 2004, Ashley Revell decided to take the ultimate wager – to gamble everything he owned on a game of roulette. He sold all his possessions – his house and car – then hot-footed it to the mecca-of-all-bets, Las Vegas. Ashley rocked up to a roulette table and bet all his chips on red – his worldly wealth adding up to a cool $135,300 at the time. The croupier spun the wheel, the ball whizzed round the table, and came to rest on…7, red. Ashley had just doubled his cash to $270,600.

So what did he splash the cash on? 50,000 Mars bars and a Milky Way? Actually Ashley did something way less exciting than that. He whizzed round Europe on a motorbike trip and then set up an online poker company that went bust. Luckily, Ashley had realised that there’s more to life than money by then.

Sure, if you stare long enough at a leprechaun it won’t hand you a piece of gold. But generally, good things do come to those who wait. And that’s what 92-year-old Elmer Sherwin found out when he became the first person ever to win the MegaBucks jackpot twice. The old chap had been playing in casinos all his life but finally won a $4.6million jackpot in 2004.

Elmer spent the money jetting round the world but continued to play slots from time to time. Then in 2008, he hit the jackpot again – this time, bagging an incredible $21 million. Nice work, old guy. Fancy lending us a quid?

Things started to look up for Sue Herdman after a trip to a tarot reader, this year. The fortune teller predicted Sue’s life would change if she bought a lottery ticket. Sue took the advice and won £1.2 million!

Instead of splashing her cash on designer clothes and cars, Sue chose to move to her boyfriend’s pig farm. And although she spends most of time knee deep in pig shit, Sue says couldn’t be happier. ‘The pigs bring me more satisfaction than any money ever could.’ We think it must be the herder in Sue.  Get it? As in, Sue Herdman. Oh don’t worry, there are plenty more Dad jokes to come….

In 1992, Greek gambler Archie Karas headed to Vegas with only $50 in his wallet. By 1995, he’d turned it into $40 million, in the longest winning streak in casino history.

Unfortunately, Archie didn’t learn to quit while he was ahead. He quickly lost $11 million playing dice, $17 million playing baccarat and was down to his last million. After blowing his remaining cash, he was arrested in 2013. The charge? Burglary, cheating and wining by fraudulent means. Bad luck, mate.

Second to “Chris P. Bacon” and “Tahra Dactyl”, Akio Kashiwagi has one of the coolest names. He also happens to be one of the best baccarat players in casino history with one heck of a reputation. Big dog Akio was well known for gambling 80 hours straight and regularly betting $100,000 in a single hand. In 1990, he achieved the biggest baccarat winning in casino history after cashing a whopping $6,000,000 after 10 hours gambling.

But like so many who win big, Kashiwagi should have taken the money and run. Instead he bet more and more with awful results. After running up gigantic debts, Akio came to a sticky end in 1992. He was found dead in his home having been stabbed 150 times with a samurai sword. Just goes to show, money isn’t always the secret to a long and happy life.

Winning it big can be life-changing and as the saying goes, you need to be in it to win it. So if you want a chance of taking the jackpot and owning your own pig farm, try one of 32Red’s online casino games today. But don’t forget always gamble responsibly!

The 7 best casino destinations in the world