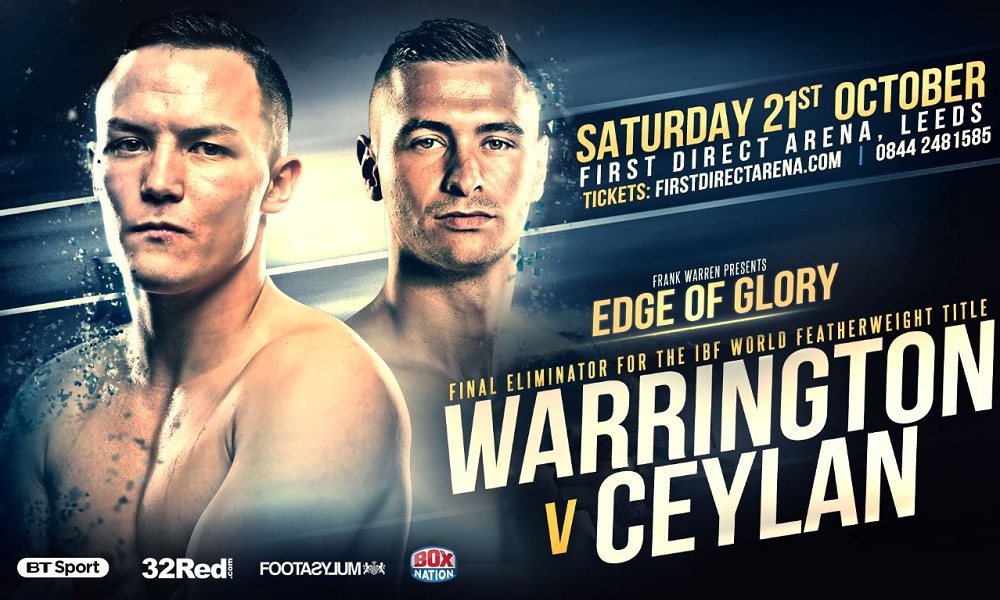 Josh Warrington exclusive: On Saturday I’ll walk out in front of thousands of my own

Not long to go now and we’re back. Saturday night will be my 26th outing and it’s a final eliminator for Lee Selby’s IBF world featherweight title. I’m fighting the unbeaten Dennis Ceylan. I think I’ve been in with better opposition to be honest with you but I’m not underestimating him whatsoever. We’re so close to fighting for world honours that I’m not gonna mess it up at this stage. No chance.

This is the part of the whole thing where your mindset really comes in to it. Rewind twelve weeks and you start off training camp by thinking that you’re going to be ready to take on anybody in the world. Any pound-for-pound fighter, bring them on and you’ll be ready. That’s just a fighter’s mentality.

As you’re going through training the doubts start. Have I ran enough miles? Have I sparred enough rounds? Have I hit the pads enough? Is there something else I need to work on? It’s all about controlling that mindset and the doubts. We do hours and hours of work in the gym, miles out running and more than enough rounds of sparring and it’s all for 36 minutes of work on fight night. I’ve found out through experience that every gym session doesn’t have to be perfect but if you can do everything well over twelve weeks, it’ll all come good on the night.

A couple of years ago people might have looked at the featherweight division and thought that all the top fighters were elite and that they were all top pound-for-pound guys but nowadays people are starting to think that I could mix it with them. If you take it back a few years though, Hisashi Amagasa was in all of the governing bodies’ top threes. Patrick Hyland was very high in the WBC rankings when I beat him and Kiko Martinez is still in the WBC top 15. The guys I’ve been beating are up there in the ratings. When you’re fighting these top guys, it drags you up a level too.

The WBC champion Gary Russell Jnr is an elite fighter but he’s inactive. That does you no good. Does he struggle for weight? Who knows what the crack is with him. He’ll probably end up moving up a division and with the likes of Carl Frampton and Scott Quigg on the scene now, the division has opened right up.

I had all that sh*t last year about apparently not wanting to fight Lee Selby when all I wanted to do was move the fight back a little bit. It certainly wasn’t because I’m scared to fight him. I’m a boxer. We put our lives on the line every time we get in the ring. It’s just that we believe we’ve got time. If the opportunity doesn’t come now, it’ll come again. I’m 26 and he’s 30. He got offered the fight again recently and turned it down but he isn’t boxing anybody else instead. He talked about fighting Leo Santa Cruz instead of me. Well, that isn’t happening. If anything Santa Cruz will fight Frampton or Abner Mares again soon. I don’t think Selby and Quigg is a big fight so where does he go? Inactivity does you no good. I’ve no idea why he hasn’t taken it this time. Maybe it’s bad management or just down to him as a fighter but sooner or later the opportunity will come and I’m gonna be there ready. I want to win a title and defend it, not just be a flash in the pan.

I keep going back to this but I came through very quickly. I didn’t get a chance to grow. I was a young 22 year old and I was the European champion. All of a sudden I was into the top 15 of the world rankings. A lot of these boys were 26 or 27 and in their peak. They had five or six years on me. You see some fighters who are men at 18 or 19 years old but I wasn’t one of them. It was man against boy for me until the last few years when I’ve really started filling to the weight. I think I’m hitting my peak at the right time.

On Saturday night I’ll walk out in front of thousands of my own at the First Direct Arena again. I absolutely love it and I appreciate it even more because I’ve had a few nights where it’s been just the opposite. I boxed on Jamie McDonnell’s undercard once in Sheffield and I took about 80 fans down the road in a coach. At the time I was about 21 and a lot of my mates were at university and couldn’t afford to buy tickets plus their drinks for the night. I was down as a floater from about 7pm and I could have been on any time so I gloved up and waited. Jamie McDonnell fought in the main event and I got put on last. The bar was closed and my fans were still up in the stands. I think Wladimir Klitschko was fighting the same night and I had to stand there next to my opponent and wait for a good twenty minutes while they finished the punditry. They started packing the seats away and tidying up around us.

When I fought for the English title against Chris Male, he was unbeaten and I went to his back yard. I fought for the Commonwealth title in Hull as an away fighter on an away promotion. I remember the press conference and Eddie Hearn said “On my far left we have the English champion from Leeds and a decent prospect, Josh Warrington. On my right, well, when you talk about talent, we’ve got it here. Let me introduce Samir Mouneimne!”

I love and appreciate the sport and I won’t let anybody down. I promise.

Josh fights on Saturday night – to see our latest boxing markets, check out 32Red Sport here. If you’re up for a flutter on table games or the slots, be sure to check out our award-winning casino too!

Jack Catterall exclusive interview: He won’t find anybody who fights like me
Warrington v Ceylan preview: Dennis no menace for Josh