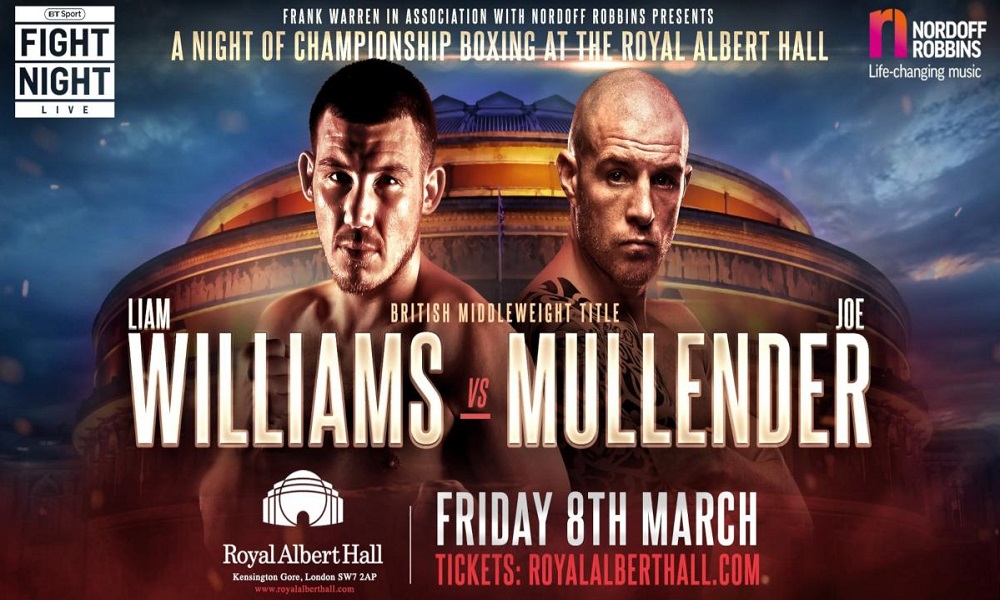 Ahead of his fight at the Albert Hall next Friday, we caught up with Liam Williams for this exclusive interview. Liam Williams takes on Joe Mullender on the 8th of March – for all the latest fight odds, visit our sportsbook.

Videos of fighters from the Ingle Gym collapsing to the floor in sheer exhaustion after completing Dominic Ingle’s patented ‘Death Run’ have become an Instagram staple. Viewers rarely see much footage of the actual workout but the aftermath gives a stark impression as to what has taken place.

“There isn’t really one definite ‘Death Run’, Dom varies it a lot. It’s different types of sprints set over the duration of a fight. You red zone until you fall on the floor basically. Hill sprints are hard but this is the hardest running thing I’ve ever done. Literally towards the end of it you feel like you’re gonna fall off the runner because you can’t keep up with it. I think I’ll be doing it tomorrow morning.”

Williams (19-2-1, 14 KO’s) hadn’t skipped leg day on the morning we spoke and the slight groan in his voice suggested he was already mentally preparing himself for the following day’s torture. As difficult as life can be in Sheffield, the results that Williams is experiencing far outweigh the suffering and have convinced the British middleweight champion to put his full trust in Ingle, who he joined forces with last year.

“Even if Dom says it is ‘Death Run’ day, I’ll just nod and do it,” Williams said. “I’ve realised that Dom reads you very well and knows what you’re capable of. He watches you very closely and know how you work. Sometimes I’ll walk into the gym and he’ll say out of the blue, ‘Your legs are tired today aren’t they?’ and I wonder how he knows that.

Although he was competing at world level – giving former WBO light middleweight champion, Liam Smith, all he could handle during their two fights in 2017 – the Welshman felt like he was operating in a rut.

Leaving behind his routine life in Wales and long-time trainer and friend, Gary Lockett, has revitalised Williams. This weekend’s fight with Joe Mullender will be his third appearance in six months and although he is still only 26 years old, he has rediscovered the attitude and mindset that made him one of the country’s most exciting prospects.

“I’ve had a new lease of life. I’m enjoying what I’m doing and I’m still learning new things all the time. I think I’d got to a point where I’d stopped learning and – if I’m really honest – I didn’t really want to learn. I’d gone down a dead end.

“There was no clear path. I’d box, have a month off and still not have another fight lined up or even a path or goal to where I was heading. I was in a comfort zone. I trained 30 minutes from home so I’d finish training, shoot off home and be out with my mates doing whatever. And a lot of it was what I shouldn’t have been doing.”

After answering the call to step in and fight Mark Heffron for the vacant British middleweight title last December, a whole new avenue of opportunity opened up for Williams. His unexpected run at middleweight has not only allowed him to remind people just how attractive his style can be to watch but it has also given him time to find his groove at the Ingle Gym without having to get himself down to his usual light middleweight limit of 154lbs. Nonetheless, a move back down to his more natural weight seems likely.

“At this weight I feel better in training and sparring and stuff but I’m probably going to go back down after this fight. The morning of the weigh in for my last fight, I was lighter making middleweight than I would normally have been if I was making light middleweight. It was a bit shit really because you look back and think, ‘F**k, why couldn’t I have been doing this before?’ It’s just the way it is.

“When I’m motivated and up for it I honestly don’t feel that anybody in Britain – with the exception of Billy Joe Saunders – is going to get near me. I’m talking at middleweight or light middleweight. They’re mentioning the likes of Felix Cash and other similar names. Offer Felix Cash the fight and see what he says. I don’t think he’d take it.

“If they offer me Cash after this one, I’ll probably then stay at middleweight for one more because I’m very, very confident I’d do a job on him. If the right deal comes my way then I’m happy to fight at either weight. I’m genuinely open to offers.”

Before Williams can sit down and plot his way back into world class – at either weight – he must successfully defend his Lonsdale belt against the determined Joe Mullender at The Royal Albert Hall this weekend. Mullender declared war as soon as the fight was announced but Williams is convinced that he possesses enough artillery to ensure it is a short, painful night for the Londoner.

“Mullender? He’s gonna come head on and try and make it rough and dirty but, being perfectly honest with you, I don’t think he’ll make it out of the first four to six rounds. He walks on to something and he goes to sleep.