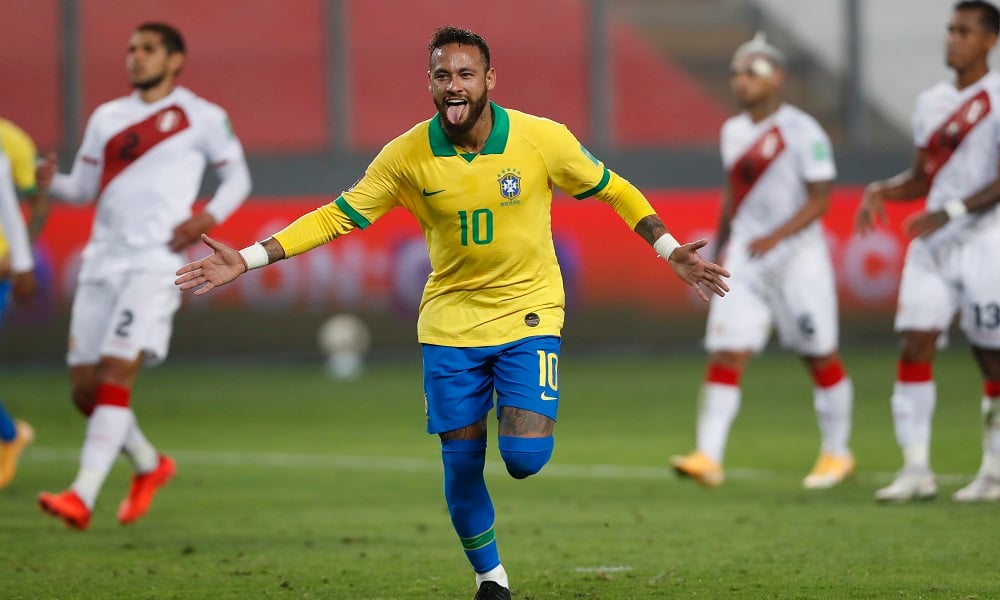 After scoring a hat-trick against Peru in a World Cup qualifier on Tuesday, Neymar has now moved ahead of Ronaldo in Brazil’s all-time list of goal scorers.

The Paris Saint-Germain star has amassed 64 goals for his nation, two more than Ronaldo managed during his time with the Brazilian national side.

And that figure sees Neymar climb to second in the star-studded list, with only Pele ahead of the 28-year-old; what’s more, overtaking Pele’s total of 77 goals looks an eminently achievable target for the former Barcelona forward.

Neymar’s three goals against Peru on Tuesday came at Lima’s national stadium, with two penalties and a stoppage time tap-in. His haul of goals to date have come across 104 appearances for Brazil; Pele played 92 times for his country on route to his total.

After the match, Brazil manager Tite was at pains to make comparisons between his current star and the likes of Ronaldo and Pele. “It’s unfair,” he told reporters. “What I can say is Neymar has this unpredictability. He is the bow and the arrow, he’s a player who both makes and takes chances.”

And Neymar himself later paid tribute to the man whose goal tally he overtook, posting on social media after the match: “Todo meu respeito por ti FENOMENO Ronaldo.” If your Portuguese isn’t so hot, that roughly translates as “All my respect for you phenomenon.”

Tuesday’s hat-trick was the fourth of Neymar’s career on the international stage; he previously scored three against China in 2012, repeating the feat against South Africa in 2014 – while later that year, he would put four past Japan.