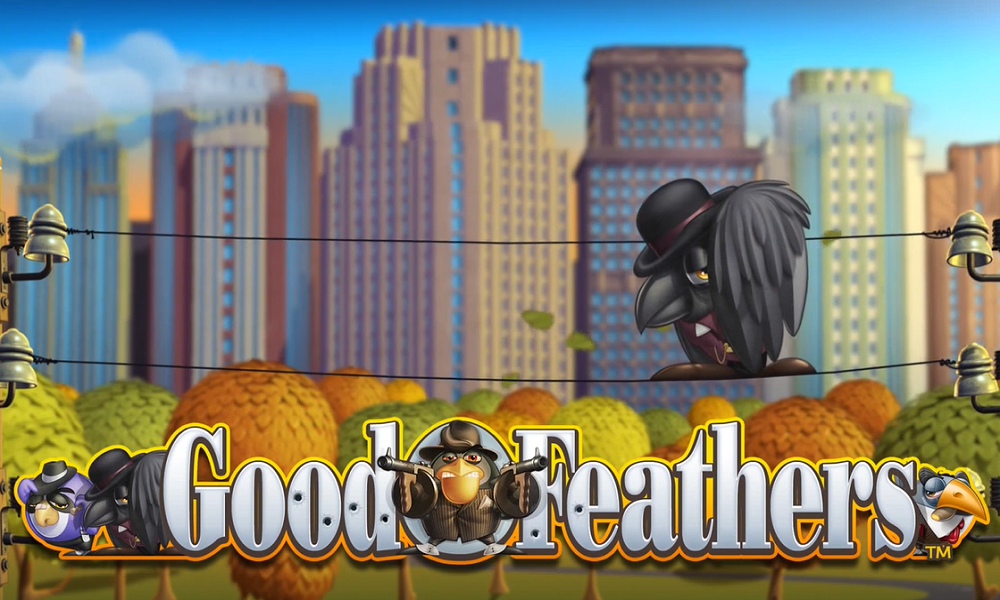 “Now go get your freakin’ birdseed box!” It doesn’t quite have the same ring to it as the original, but you know what we’re saying. For an avian organised crime epic that pays tribute to some of the greatest gangster flicks ever made, Goodfeathers is definitely one high flying bird.

Yep, Blueprint Gaming’s latest release definitely sets out to ruffle a few feathers. This five reel slot features all manner of bird-brained wiseguys, from sinister looking crow hitmen to what appears to be a rather flamboyant owl (Owl Capone?!), decked out in dapper pink suit.

With the bird bad guys depicted in charming, rather than chilling fashion, the emphasis here is on humour, but this slot isn’t short on gaming thrills – there are some fine features here to compliment the wacky theme.

Look for FBI badges, for instance – they’ll light FBI on the Wanted Meter, which will trigger the Briefing Room Bonus once it fills up. From here, players can pick a case to reveal one of five options, which offer a range of bonuses or Free Spins.

There’s also a feature called The Birdfather which can be triggered after any spin. This will award one of a trio of bonuses, including Fly By Wilds, Egg bomb, and Stork Wild.

With Fly By Wilds, a bird will fly past the reels, shooting certain symbols to turn them to wilds. Egg Bomb sees a bomb thrown onto the reels which causes a reset – and guarantees a win. And Stork Wilds sees a Stork stacked wild symbol dropped onto the reels. If it makes a win, it will work as any other cascading symbol.

Put together with Blueprint’s signature style, Goodfeathers is a quality release that will keep you entertained without resorting to the carnage and cuss words of the movies that inspired it.

This slot doesn’t take itself too seriously – but thankfully, the potential payouts on offer are definitely worth getting in a flap about…

Goodfeathers is out now – visit 32Red Casino to play, or for more options check out our wide range of table games and slots!