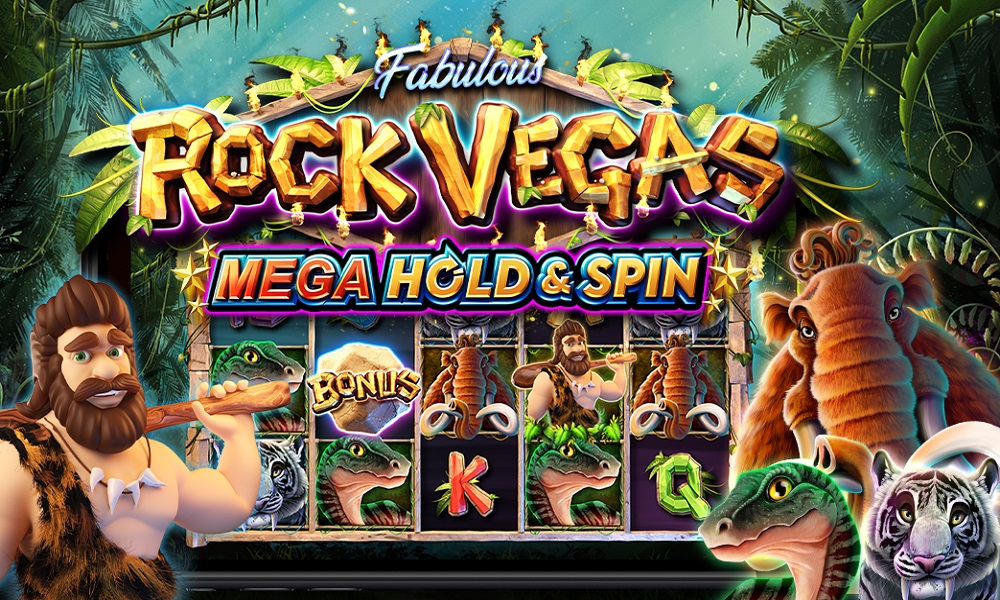 Looking to get your rocks off? You’re not alone. When a club-wielding Neanderthal man wants to blow off a little steam, what else would he do but indulge in a little gambling action? Play Rock Vegas now

That’s the concept behind Rock Vegas, the must-play new slot release from Pragmatic Play. And with a cavalier disregard for conventional historical theory, here we’ll find woolly mammoths, sabre toothed tigers and dinosaurs living amongst one another in some prehistoric utopia.

But while the theme may be prehistoric, the presentation is assuredly contemporary. Eye-catching animated visuals make it a pleasure to revisit this more primeval era across five reels and three rows.

Features-wise, the Mega Hold and Spin is sure to catch the attention. Triggered when you land three bonus scatters symbols.

Ugg the Caveman can also pop up at any time to give the reels a whack with his club – and potentially help more Bonus rocks drop down onto the reels.

Once the Mega Hold and Spin feature is live, you’ll start with an empty 10×10 grid, together with three lives. Every time a rock lands on the reels, it will remain in place, and your lift count will reset to three.

The objective is to fill the grid with rocks – once the feature finishes, the total value of the rocks will be combined and paid out. Rocks of the same type can merge to create one big old rock with a multiplier that can push up your payout, too.

Still want more ways to ramp up the rock quota? Sometimes while Hold and Spin is in play, a burning background effect can kick in – at which point, further rocks can be added to the empty positions, resetting your life counter to three once again.

Some Rocks can have keys attached too – with keys added to a trail that can eventually lead to a locked chest, opening it to reveal a random prize. Collect enough kesy, and you could also access the mystery multiplier.

With so much going on, you might feel a tad bamboozled – but once you’re playing, don’t fret, it’s all very intuitive. In short, there’s a lot of ways to win here.

Incidentally, it’s also possible to retrigger the feature, if you’re able to fill all the grid positions too – or you manage to access a retrigger from one of the chests.

Ready to rock out, then? It’s time to discover a whole new era of Vegas gaming – for players who’ve got the stones, at least…

Rock Vegas is out now. Visit 32Red Casino to check out a wide range of table games and slots!