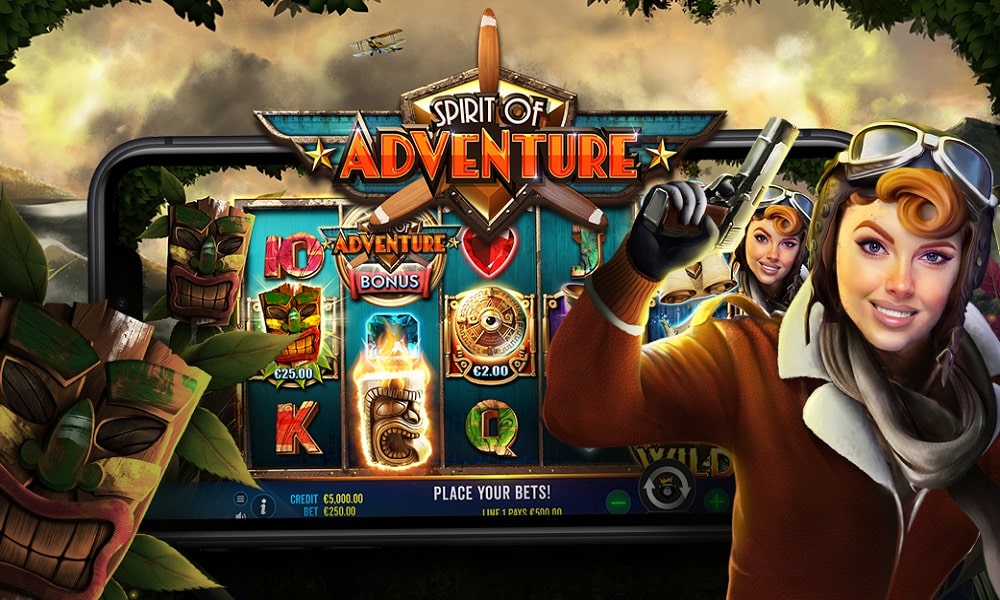 Spirit of Adventure slot out now

Embark on an offbeat airborne mission (sort of) in Spirit of Adventure, a charming new release that pays tribute to the pioneering women of early air travel. Even if the pioneer here spends less time in dog-fights and more time exploring a mysterious forest. Play Spirit of Adventure slot now

The plucky heroine is ever present. And with her pilot’s get-up, you’d expect images of aviation action galore.

Instead, our fly girl seems to have made an emergency landing in a mysterious South American jungle island. Chalices, magical swords and ornate amulets populate the reels.

Look for the Bonus symbol – if three, four or five of these land in a single spin, they’ll trigger the Free Spins feature, where you’ll be granted either 8, 10 or 12 Free Spins.

There’s also an Island symbol that appears only on the central reel. If this symbol lands, you’ll automatically be awarded 12 Free Spins.

During the Free Spins bonus, there’s a Wild Symbol that is ever present, moving around the reels and helping you land payouts.

Look for the relic symbols – the sword, the chalice, the amulet and the mask. During the Free Spins, these symbols also act as money symbols, and each one can carry one of a range of values.

Relic symbols and multipliers too

These can range from modest amounts to sizable sums – for instance, the maximum money value on the mask is 5,000x.

And even after you use up the Free Spins, that’s not necessarily the end of the story. Now a Totem image will appear, chasing your Wild symbol. Until it lands on the Wild, those Free Spins keep coming…

Combining can-do Amelia Earhart-style energy with an unexpected foray into a locale filled with enchanted relics, Spirit of Adventure is a genre-mashing joyride that blends aviation and occult weirdness.

Needless to say, it’s a blast. Ready to let the Spirit move you?

Released on 26th April 2022. In the meantime, visit 32Red Casino to check out a wide range of table games and slots!

Continue Reading
You may also like...
Related Topics:featured, Spirit of Adventure