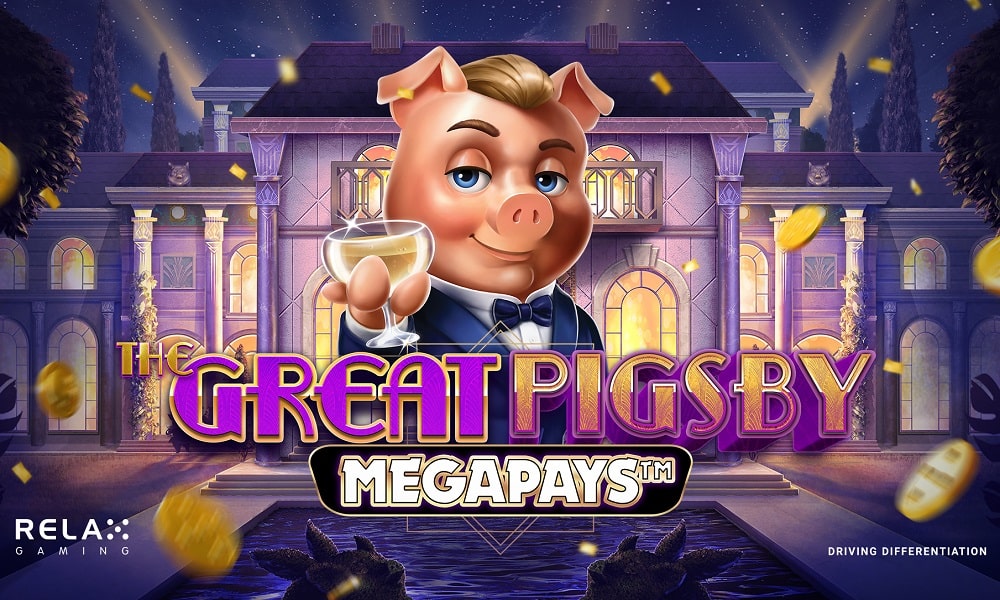 The Great Pigsby slot out now

When F Scott Fitzgerald published his masterpiece of Jazz Age disillusionment, who could have imagined that the work widely described as the definitive Great American Novel would one day inspire a video slot starring a nouveau riche pig. Play The Great Pigsby now

Enter The Great Pigsby, new from Relax Gaming. And with the haunting image of an immaculately tailored Pigsby proffering a glass of champagne in one trotter, this slot captures all the excess of the roaring 20s – in gloriously off-kilter fashion.

117,649 ways to win with The Great Pigsby Megaways

The Great Pigsby certainly puts a comical spin on the glamour of Gatsby. Fire up the slot and you’ll be ushered in with Pigsby’s own theme song, which makes the questionable assertion that “there is a pig we all want to be”.

But beyond the preposterous porcine-themed imagery of this six-reel release, the features and play mechanics here mean you’ll be in hog heaven.

Because this is a Megaways slot, there are up to 117,649 ways to win. There are also four Megapays Jackpots up for grabs, ranging from Mini to Midi, Major to Mega. All four of the Jackpots are progressive, which means that they’ll continue to grow until someone wins.

Four jackpots up for grabs with Megapays

There’s also a Megapays feature that can be triggered on any bet. The Megapays logo will light up, and a special spin will take place. Any Megapays symbol that lands will lock into place, and you’ll then be given another respin.

The more Megapays symbols you collect, the closer you’ll come to collecting the Mega Jackpot.

Elsewhere, look out for the Piggy Bank. Any Wild symbols that land on the reels will expand to cover the entire reel – and will also be collected in the Piggy Bank above the reel area. For each Wild you collect, you have a chance to trigger a bonus, too.

There are Free Spins, of course; activate this bonus, and you’ll be awarded 10 Free Spins. While the feature is in play, if a scatter symbol lands you’ll be granted two extra Free Spins. Meanwhile, one of the royal symbols will be deactivated, to be replaced by different symbols.

There’s also a Wild Respin; you’ll be awarded a respin where between two and five of the reels turn wild. There will also be multipliers on the Wild Reels.

And if you trigger the Great Pigsby Respin, a number of Pigsby symbols will be placed as overlay symbols on the reels, giving you more chance to land a tasty payout.

Ready to go the whole hog with this opulent oinker then? No doubt about it, the hammy host sure does throw one hell of a party. And, yep, it’s almost time to pig out…

Released on 6th April 2022. In the meantime, visit 32Red Casino to check out a wide range of table games and slots!

Continue Reading
You may also like...
Related Topics:featured, The Great Pigsby