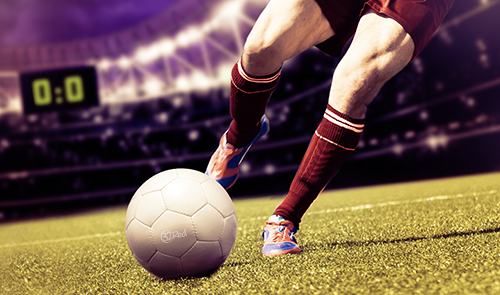 The Premier League is back and this years’ title race is guaranteed to be packed with more action than an Arnold Schwarzenegger film. So to celebrate the most exciting league on the planet, we’ve rounded-up its top ten goals. Get ready to see a few screamers from football legends!

Way before Golden Balls became one half of Posh and Becks, he scored this absolute corker of a goal. On the opening game of the season, Becks received the ball behind the half-way line and banged it straight over the keeper’s head into the net. What a beauty!

The French international may be best known for that kung-fu kick, but this little gem of a goal wasn’t too shabby either. Cantona fires the ball into the sweet spot just out of the goalie’s reach. It bounces off the post into the net and bags Cantona a spot in Premier League history.

Henry’s goal against arch rivals Man Utd, had plenty of va-va voom to it. The gunner gets a first touch on the ball a few yards outside the box and then pulls off a peach of volley. He fires it beautifully over the keeper’s head. G-O-A-L!!

Wayne Rooney has scored a few belters in his football career but this goal in a 2011 Manchester derby tops the list. After a great pass from Nani, the England forward bicycle kicks the ball into the net making his world-class goal look as easy as riding a bike.

Matt Le Tissier’s magical piece of footwork produced one corker of a goal in this stunning victory over Newcastle United in 1993. Le Tissier runs circles around one Newcastle defender, then chips the ball over a second, only to smash the ball into the net, leaving his opponents blind-sided.

In this ridiculous goal from one of Arsenal’s all-time greats, Bergkamp pulls off a beautiful little turn. The Arsenal forward gets a cracking pass from Robert Pires and then chips the ball behind the defender’s back. He finishes by gliding it passed the keeper in true Gunner style.

Back when Ronaldo was still a fresh-faced striker for Man U, he produced this screamer of a free-kick against Portsmouth FC. CR7 lined up a free-kick from over 30 yards back before firing the ball past the goal-keeper, leaving his opponents shell-shocked.

Sir Alex Ferguson called Di Canio the ‘one that got away’ and from this world-class goal it’s easy to see why. After Trevor Sinclair lobs the ball to the Italian striker, he expertly scissor kicks it over the goalie’s head. The keeper had no chance!

Suarez was the Premier League’s top scorer before he was nabbed by Barcelona, last year, and this top goal shows why he’s one of the world’s best. After spotting the keeper off his line, he smashes the ball from 40 yards off over the keeper’s head. Back of the net!

Chelsea may be the current Premier League champs, but they still found themselves out-classed in this Stoke game. Charlie Adams took his chances on a strike from too many yards back to count, lobbed it over the goalie’s head and out of his fingertips. What a corker!

What do you think of our top ten goals? Know any epic shots we’ve missed off? Let us know, below.

Love football? You’ll go crazy for our online video slot game Football Star. It’s a beauty! And if you’re as excited as we are for the new season, then pop over to 32RedSport and check out the latest odds on this weekend’s fixtures.