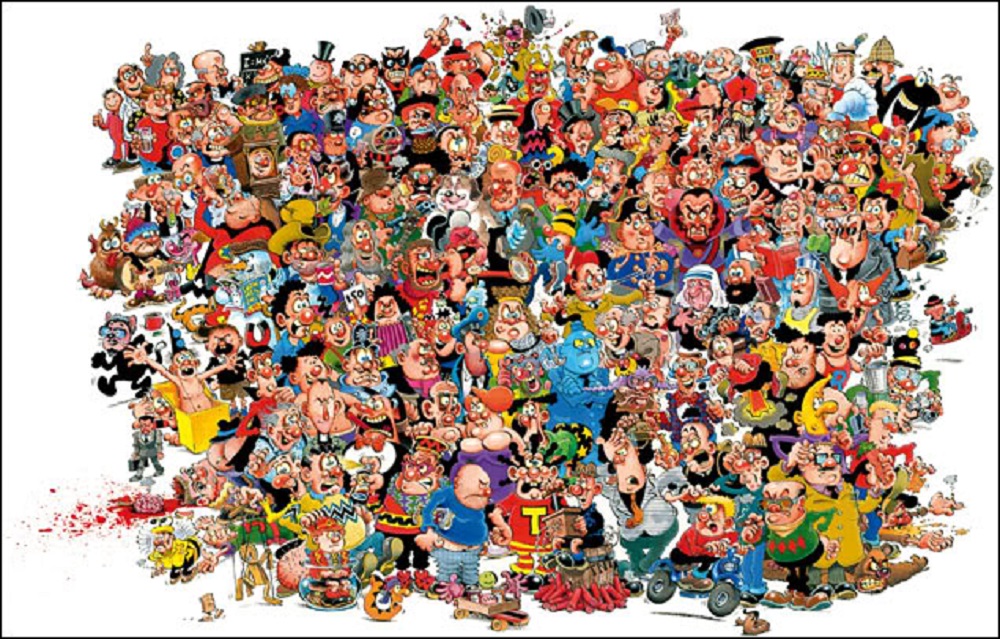 Unthinkable as it seems, legendary British comic Viz is almost four decades old now – and some 284 issues in, this unparalleled bastion of puerility remains the gold standard in toilet humour.

Even if you’ve never read the comic, chances are you’ll have heard of many of the characters. Buster Gonad, Finbarr Saunders, Billy the Fish; often inspired by classic children’s comic book characters, the Viz characters were given an absurd or angrier, expletive-laden tone; the Dandy’s Bully Beef was reimagined as Biffa Bacon, for instance.

So while the character from the kid’s comic might plot to take a bag of gobstoppers from his rival, Viz’s Biffa would ask a passing stranger if he had a light for his cigarette – then punch the stranger and steal the lighter. Er, it’s funnier on the page.

Viz’s history is packed with a plethora of memorable characters, from the exceptionally frugal Norbert Colon, who’s tagline was ‘he’s as tight as a gnat’s chuff’, to the fractured non sequiturs of Roger Irrelevant, an unusual youngster who refused to be bound by the laws of convention or context. Instead, apropos of nothing he would produce a goldfish for no earthly reason, or else wibble unaccountably.

Roger Irrelevant was one of Davey Jones’s contributions, whose array of one-off comic strips also took in such berserk creations as Mickey’s Miniature Grandpa (the Grandpa in question believes himself to be just six inches tall, when he’s actually an old man suffering from senile dementia) and Scottie Trotter’s Tottie Allotment; as the name implies, young Scottie owns a remarkable portable allotment on wheels, which contains several attractive young women.

These brilliant, ludicrous creations would come later, however. Viz started life in November 1979, thanks largely to the efforts of disaffected young Newcastle lad Chris Donald, moonlighting from his dull job as an office clerk. The first issue had the look of a fanzine; endearingly amateurish, few could have supposed this publication would go on to be one of the most influential organs (ooer) in modern British comedy.

That’s exactly what happened, though; for a spell in the late 1980s and early 90s, Viz Comic was a true publishing phenomenon. At the height of its popularity, each issue sold more than a million copies. It was read, usually surreptitiously, in offices, schools, and even the houses of parliament (in his diaries, Tory MP and notorious womaniser Alan Clark made reference to the character Aldridge Prior the Terrible Liar).

Back then, readers picking up a copy for the first time could scarcely be prepared for the combination of quaint, Beano-style artwork alongside swearing and idiocy.

Little wonder Viz had such appeal – it’s sense of humour was anarchic, wilfully ridiculous, and crude. Aside from the comic strips and cartoons, there were also inane letters, absurd articles and spoof adverts. Oh, and Roger’s Profanisaurus – essentially, a forerunner of the Urban Dictionary site, where all manner of inventive, useful rude words and phrases could be found.

Combining the scatological and the surreal in scandalously amusing fashion, Viz Comic’s genius was its disregard for the status quo. The small team of writers would ridicule tabloid newspapers as well as the celebrities that appeared in them, create a full-page comic strip seemingly for the sole purpose of criticising their own publisher – and frequently make jokes about the Viz readership’s perceived lack of intelligence.

On that point, one of the original writers, Graham Dury, once said of Viz ‘you never learn anything by reading it.’ But to quote Roger Mellie, Graham is talking absolute bollocks. I don’t think it’s an exaggeration to say that Viz’s sometimes surreal, often cynical, frequently pessimistic outlook on British life has offered blackly hilarious reflections of our culture – and it has unquestionably contributed to it, too.

Even if you don’t buy that, there’s no denying the influence it’s had on British comedy over the years; Stewart Lee is a fan, Harry Enfield’s TV show in the 90s was essentially an attempt to bring Viz comic characters to the small screen, while more recently comedy fare like Toast of London’s frequently preposterous stories are heavily inspired by Viz’s exquisite twaddle.

Conventional wisdom is wrong, too. For better or worse, Viz is still just as funny as it used to be. A British institution and a national treasure, while the rest of the country might be going down the toilet, that’s just where this publication has felt most comfortable over the last 40 years…