US Presidents, Emoticons, slots and typos

With the release of our brand-new slot – Emoticoins – let’s look at the colourful presidential history of the ubiquitous emoticon, AKA emoji…

President Obama recognised the importance of the emoji in 2015. When he met Japan’s Prime Minister Shinzo Abe on the white house lawn he went out of his way to thank him directly for manga, anime and … the emoji. Emoji is a combination of two Japanese words: “e” (“eh”) = picture and “moji,” = letter or character. But while Obama obviously knows his modern emoji history, he didn’t seem to realise that the presidential emoji goes way back, much further than Shigetaka Kurita’s text-messaging inspired smileys from the 90s…

While it wouldn’t surprise anybody to see the current Tweeter-in-Chief Trump busting out the odd emoji in his favourite 140-character style, there is more to the history of presidential emoji that you might think… In 1862 the New Yorker published a speech by none other than Abe Lincoln, allegedly printing the first emoji – to emphasize “applause and laughter”:

You can judge for yourself whether this is in fact a typo as many suggest, but there’s now no denying that Donald Trump has something in common with Abe… if nothing more than a typo.

Power of the Emoji

Fashioning himself as “Modern Day Presidential” for his use of social media to speak to the masses, Trump tried to use the emoji as a weapon to attack his rival Hilary Clinton in 2016. Gary Coby, Trump’s Campaign Director, wanted Twitter to approve a special emoji that they could attach to their favourite hashtag #CrookedHillary. The emoji in question was apparently a hand running away with some dosh, but it was shut down by Twitter, infuriating Donald.

Coming from the other side, Trump came under emoji-attack from Lloyd Blankfein, the Goldman Sachs CEO, this year. In response to Trump’s environmental policies, Blankfein tweeted the star-spangled banner, a globe and the dollar sign to reach the trenchant Tweeter-in-Chief (to no avail).

Sarah Huckabee Sanders, Trump’s deputy press secretary, is also renowned for her eloquent use of the Emoticon.  As her infamous Tweet below clearly shows, she (or her toddler, as she later claimed) knows how to express herself through the art of emoji. 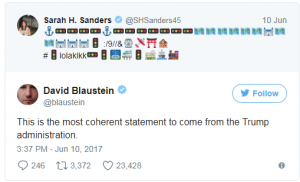 Some claim that Huckabee was using complex code to transmit a message, taking her cue from ex-boss Sean Spicer, famous for his cryptic Tweets – “n9y25ahy7?” and “Aqenbpuu” and, of course, Trump’s now famous neologism – “covfefe”. But while Trump himself isn’t a big emoji user, he has inspired his very own trumpojis: 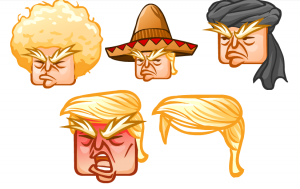 With such a rich global history, it’s no wonder that the emoji now has a slot all to itself – due out today at 32Red Casino. Emoticoins is full of your favourite 😛 and LOLs, but it will also put a big 😀 on your face when you trigger some truly :O bonus rounds, trigger Wild Blast ™ – which throws 5 extra wilds onto the reels for a guaranteed win, or Wild Stickers ™ – awarding you 10 Free Spins! 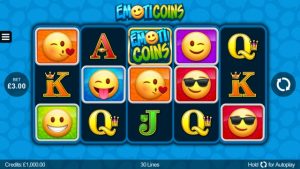