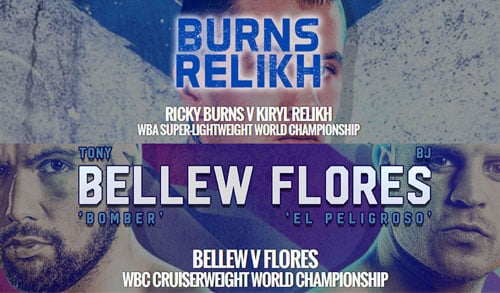 We’re delighted to announce that 32Red will be backing two huge nights of World Title fights put on by our good friends at Matchroom Boxing. First up is Scotland’s first ever three-weight World Champion Ricky Burns, who defends his WBA Super-Lightweight title against unbeaten Kiryl Relikh this coming Friday in Glasgow and then the following weekend, WBC Cruiserweight king Tony Bellew puts his title on the line against BJ Flores in his first defence.

Burns is no stranger to headlining the big events, having previously taken on and defeated the likes of Roman Martinez, Michael Katsidis and Kevin Mitchell during his reigns at Super-Featherweight and Lightweight. And he’ll need all of that experience this weekend as he meets Ricky Hatton trained, Belarusian Relikh, who comes to Glasgow with 19 KOs from his 21 wins. Also on the SSE Hydro bill are Brixton rivals Dillian Whyte and Ian Lewison battling it out for the vacant British Heavywight strap and Scotty Cardle puts his British Lightweight title on the line against Kevin Hooper.

Hot on the heels of the Glasgow card we then roll on to the Echo Arena in Liverpool for another blockbuster bill! Star of Creed, Tony Bellew, defends his title for the first time having got up off the canvas in May to defeat the power punching and heavily avoided Ilunga Makubu in three action packed rounds. Having won the title at the home of his beloved Everton, Tony is now targeting massive fights against fellow Cruiserweight champ Dennis Lebedev or a huge All-British showdown against David Haye. However, before doing so, he’ll have to overcome Haye’s good friend Flores, who’s lost only twice in 35 fights.

Bellew will also be joined on the show by fellow Merseyside man, Derry Matthews who aims to upset London 2012 golden boy Luke Campbell and Ryan Farrag will hope the local support is good enough to see him overcome exciting prospect and Olympic Youth Gold Medalist Ryan Burnett in their British Bantamweight showdown.

All the knock-out action will be live on Sky Sports, but if you want to be there in person, make sure you keep your eyes peeled for news of how to win tickets on 32Red’s Twitter feed over the next few days!