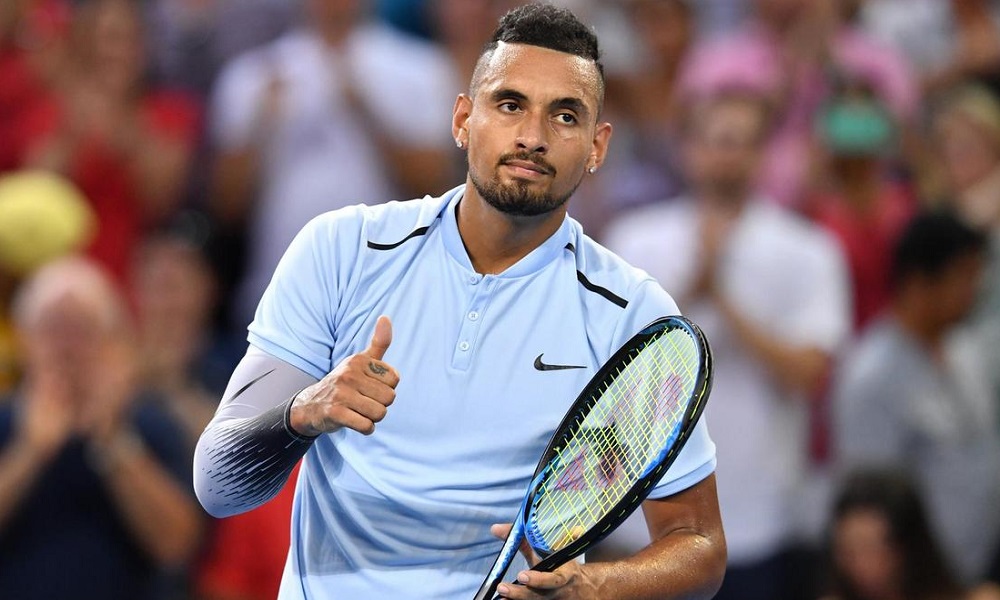 He’s been tipped for tennis greatness, but he doesn’t bother employing a coach. He beat the world No.1 at Wimbledon when he was just 19, yet often crashes out of tournaments in calamitous fashion.

Oh, and during a match against Stan Wawrinka a few years ago, he audibly taunted the Swiss No.2 about his love life. Yep, Nick Kyrgios is quite a character.

As the 6ft 4 Australian prepares to take on Rafa Nadal at Wimbledon, here’s four times Kyrgios caught our attention to earn his reputation as the bad boy of tennis.

Beating Nadal at Wimbledon in 2014

Grass might not be Rafa Nadal’s favourite surface, but the Spaniard has won Wimbledon twice. So few expected the world No.1 to struggle when, in the fourth round, he was drawn against 19-year-old Kyrgios, a wildcard with a world ranking of 144.

Instead, Kyrgios beat the top seed in four sets, winning 7-6, 5-7, 7-6, 6-3, in the process serving up 37 aces, though there were also exceptional rallies between the two – the right-hander’s performance was impressive enough to make John McEnroe observe “we have a new star in the tennis world”.

And who could quibble with that – particularly after seeing the Australian’s impudent flick from between his legs to stun Nadal and the watching millions.

‘Tanking’ at Wimbledon 2015 against Richard Gasquet

Unfortunately, just one year later the crowd turned against Kyrgios at Wimbledon; during a defeat to Gasquet in the fourth round, it seemed as if the volatile Aussie just wasn’t trying.

Having had his serve broken in the second set, Kyrgios’ reaction to this setback was to return serves into the net, seemingly deliberately – or else not attempt to hit the service at all. Naturally, this reaction was not appreciated by the spectators, who booed the young player.

Since that infamous display, there have been several occasions when a sulky Kyrgios has seemingly played well below his level, even admitting as much in 2017 when he confessed there are some days where he’d “rather be doing something else than play tennis”. Indeed, during the Shanghai Rolex Masters in 2018, a clearly uninterested Kyrgios asked the umpire to “call time so I can finish this match and go home.”

A general lack of interest in tennis

On several occasions, Kyrgios has admitted he struggles to motivate himself (which is why hiring a coach might not be a bad idea Nick – have that one on me).

He once told an interviewer that he “is not at all dedicated” to tennis; it seems he’d rather be playing basketball. In 2017, he told reporters: “I was playing basketball every day for two hours. I played an hour of basketball before I played David Ferrer in the semi-final,” which kind of seems – ill-judged? A cry for help? Out and out batshit crazy?

At least basketball is keeping him fit. During the same press conference, the hapless player admitted he was eating ice cream every day…

Earlier this year in Rome, Kyrgios made headlines for the wrong reasons once more. During a second round match against Casper Ruud, Tricky Nicky entered into a dispute with the umpire after being given a code violation for unsportsman like conduct.

Predictably, Kyrgios didn’t take this turn of events well, petulantly hurling his racquet to the floor while tossing out a few choice swearwords, eliciting boos from the crowd, kicking a bottle – and then finally throwing a chair into the middle of the court.

“I’m done, I’m fucking done,” he shouted before packing his bag and exiting the court. Which is infantile, ridiculous behaviour of course – but does mean that, whether Nick wins or loses this afternoon, there’s a good chance the match will serve up some fireworks. Hey, if you’re missing Jeremy Kyle maybe this will work as a fitting substitute…

For the latest sporting betting markets, visit 32Red. If you’re looking for a different kind of flutter, check out our 32Red Casino site – there’s plenty of slots and table games to keep you entertained!

Sporting shocks that will stun you
Can’t win ‘em all: The worst ever losing streaks in sport