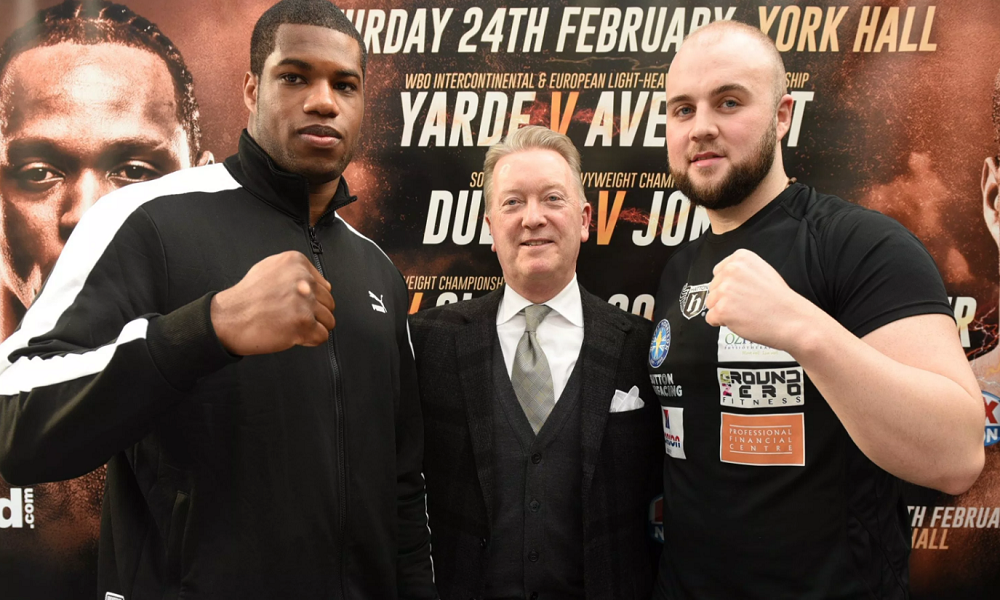 It is often said that when the heavyweights are thriving, the rest of the sport benefits. Boxing’s flagship weight division is going though its most interesting and dramatic period for years and British fighters are right in the thick of the action.

On Saturday night, all eyes will turn to the O2 Arena in London as Daniel Dubois, Nathan Gorman, and Joe Joyce get the chance to show that the division’s future is equally as bright as its present. For all the latest fight odds, visit our sportsbook.

“It’s a good time for the heavyweight division and it’s really good for Britain,” show promoter, Frank Warren, told 32Red. “We’ve got three of the top guys on Saturday night. They’re three of the best prospects in the world and I’m really looking forward to it. The division is on fire for various reasons.”

One of those reasons is the emergence of a new, exciting group of ambitious youngsters. On Saturday night, 32Red ambassador, Dubois, and Gorman will collide with the British heavyweight title at stake. The meeting of young, unbeaten prospects has captured the public’s imagination.

Usually, promising heavyweights are wrapped in cotton wool and manoeuvred as routinely as possible into title contention. Warren would have preferred both fighters to have continued along their own paths for a little while longer before pitching them in together but rather than seeking an alternative route to the top, both Dubois and Gorman know each other well from their days as amateurs and ran headfirst towards each other.

“I’ve gotta tell you something. Contrary to what people think about politics, most of the time fights don’t happen because of the boxers. I can think of a lot of fights that have gone by the wayside because A doesn’t want to fight B,” Warren said. “That’s not the case here. We’ve got them on and the winner will go on to do great things and I don’t think it’s going to be the end of the world for the loser.

“It takes two to make a fight. As I’ve mentioned before, look at George Groves and James DeGale. They both went on to win world titles. It’s all experience for the lads too.

“At the end of the day this is going to be about discipline. They can’t get fazed, they need to stick to their gameplans and do what they’ve got to do.”

Dubois has been promoted as the future of the heavyweight division since his debut just over two years ago. The 21 year old is the classic heavyweight. Tall, powerful, with solid fundamentals and explosive power. He is also all business. The calm, quiet, Londoner has little time for the limelight, preferring to spend every waking moment focusing on his lifelong dream of becoming the heavyweight champion of the world.

“Look at George Foreman. When he first turned pro, he was grumpy. You couldn’t get a word out of him. That’s why – when he went to Africa to fight Ali – the fans were all for Ali. When he came back, he was a totally different person. That comes with maturity,” Warren remembered. “Daniel may be quiet at the moment but he’s got this inner confidence and self belief. He’s young but in time he’ll settle down.

“I was reading something he said the other day: ‘It’s not what I say outside the ring, it’s what I do in it that matters.’ And he’s dead right.”

The silent assassin persona is beginning to work for Dubois and for a heavyweight, an explosive knockout is the ultimate promotional tool.

“He has caught on. A lot of people are talking about him but now we just have to break out from being a ‘trade’ fighter to being a crossover. A bit like what happened with Anthony Joshua. The difference is that Joshua has been boxing since he was about 18 whereas Daniel has been doing this since he was a little kid. He’s a natural fighter. I think that’s really important.”

Gorman is another natural fighter. Trained by Ricky Hatton, his uncle, Bartley Gorman, reigned as the undefeated king of bare knuckle boxing for over 20 years and the 23 year old has inherited the famous family’s fighting genes. Seen as an underdog when the fight was announced, more and more people in the know are backing the quick fisted, skilful man from Cheshire to emerge victorious.

“I tell you something, Ricky and Nathan fancy the fight big time,” Warren said. “There’s no lack of confidence there. He thinks he’s got the style to beat Daniel and he talks a lot about what they did as amateurs. They’re obviously professionals now but it’s an intriguing fight. There’s a case for both of them.

“Nathan’s last couple of fights have been against last minute subs. I think his opponent changed twice last time. That’s hard for a fighter. He’s a good pro and you think about when he first came into the business and he was a little bit podgy. Like I keep saying to everybody, boxing isn’t about being cut out of marble. It’s about what you’ve got inside. Look what Andy Ruiz did and look at the weight Tyson Fury had to lose to fight Deontay Wilder. It’s about what you’ve got inside and Nathan comes from a boxing background. He’s boxing through and through. He’s got fast hands and good movement. He rolls his heads and moves from side to side.

“I just think the styles are going to compliment each other and they’re going to turn this into something so special.”

On a packed undercard, Olympic silver medallist, Joe Joyce, continues his rapid progress when he takes on former world title challenger, Bryant Jennings. Joyce has stopped all nine of his professional opponents so far and his team are constantly calling for the division’s biggest names but the experienced and still ambitious Jennings seems like the ideal opponent at the ideal time. Should he win, the public clamour for a fight between Joyce and the winner of the Dubois and Gorman fight will grow louder.

“Joe has said himself that he’s 33 and he’s in a hurry,’ Warren said. “He did well as an amateur but he’s still only had nine fights. That’s it. You need experience. He’s going in with a fella who’s very, very confident and who isn’t a bad fighter. He was well ahead in his fight with Oscar Rivas going into the last round until he got clipped. Rivas is fighting Dillian Whyte next so this is a good step up for Joe.

“In an ideal word, we’d like to see Joe win and for him to fight the winner of Daniel and Nathan. I’ve gotta be honest, I still think that I’d much rather have done that fight at the end of the year but we’re in the position we’re in. I think it would have been a much bigger fight because they’d have had more exposure by then but it is what it is. It’s a cracker of a card and we’re all really looking forward to it.”