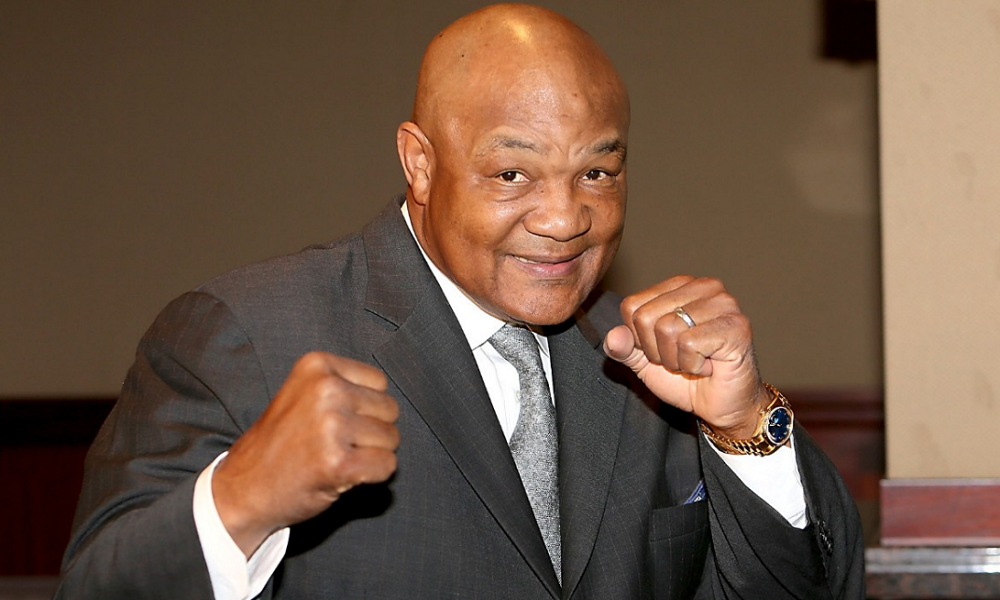 Once upon a time, the world would stop for a heavyweight title fight. From his devastating knockout of Joe Frazier to ‘The Rumble in the Jungle’ with Muhammad Ali. From that unforgettable brawl with Ron Lyle to his stunning victory over Michael Moorer to reclaim his crown at the age of 45, George Foreman found himself at the centre of the world’s attention time and time again. The two-time heavyweight champion is overjoyed that the division has once again captured the public’s imagination.

“I love it. I love it. There are a lot of good conversations to be had about heavyweights for a change,” Foreman told 32Red.

“Heavyweight is still my division and when I can see some good shaking up in it, I’m more than happy. I think Andy Ruiz upsetting Anthony Joshua the other night was the springboard to some great match ups in the future. I think that Joshua will come back and become a better champion but at the same time I think he’s going to have some competition now.”

The news that two of the young fighters who hope to be providing that competition in a couple of years will put their unbeaten records on the line and face each other this weekend was music to Foreman’s ears. The British title clash between 32Red ambassador, Daniel Dubois, and Nathan Gorman has captured the imagination of British boxing fans and promises to provide an invaluable clue as to which of the youngsters is most likely to reach world level.

“That’s the way we used to do it way back in the day. If you think you’re so tough, fight the best. Then the world will look on and see and say that the heavyweights are back. They’re fighting one another. Bring back the good old days when on any given night, Joe Frazier could beat Muhammad Ali. Muhammad could beat Foreman. Foreman could beat Frazier. Norton could beat Muhammad. Let’s bring those days back. We’re ready and waiting for it.

The young Foreman was a destructive force. After turning professional as a 20 year old, he reeled off 27 consecutive victories during his first two years in the sport. He knocking out 25 of those opponents but benefited from being given tough tests at the right time. By the time he had completed his apprenticeship he had ticked every box physically and, more importantly, mentally. When he stepped into the ring for his first world title shot, he knocked out the legendary Joe Frazier in two brutal rounds.

“I took on a lot of hungry young guys. I remember a fight with a guy called Ted Gullock. My manager made that fight and I wondered why. I told him that I didn’t need that fight. I didn’t question him, I just didn’t agree with him.

“Chuck Wepner was another guy. He’d just upset a top prospect called Forrest Ward and after I beat Chuck I knew I had something going. I didn’t want to fight him but Dick Sadler said we could do it. I fought him and beat him. After that, I thought I could beat anybody. Anybody, any place, any time.

“That’s the one thing that money can’t buy. Confidence. You can line a hundred guys up in the ring and knock them all out but unless you know for certain that they can catch a punch and hurt you too, you will never have confidence. That’s what I had after I fought Wepner and George Chuvalo. I had confidence.”

Foreman was a massive fan of Prince Naseem Hamed during the Prince’s period of world domination, admiring his showmanship as much as his devastating power. The Tyson Fury roadshow rolled into Las Vegas for the first time a couple of weeks ago and boxing fans in ‘The Entertainment Capital of the World’ were treated to a gala performance, as Fury danced his way to the ring and then viciously stopped the overmatched Tom Schwartz inside two rounds.

After Joshua’s shock defeat to Ruiz, a rematch between Fury and WBC champion, Deontay Wilder, stands as the biggest and most lucrative fight to be made in the division at the moment but Foreman is overjoyed that boxing fans seem set for a series of fights which should ensure that the heavyweight division grabs the headlines for years to come.

“Tyson Fury is a real entertainer. I think he’s more of an entertainer than he is anything else. He loves entertaining people in the ring. I don’t think it was surprise that he won. It was a little bit of a surprise that he got a knockout, he usually likes going the distance.

“Two years out is just like going on a cruise from America to Europe and back. It’s absolutely nothing. The guy’s big and he’s got good timing and he got his weight back down. Tyson Fury was in fantastic condition [when he fought Deontay Wilder]. I saw it coming all along, he wasn’t afraid of Wilder.

“He’s the guy to talk about right now. He’s the cream of the crop right now. Joshua, he’s my number two guy and he’ll come back. Wilder, boy, he never stops throwing that right hand. He throws that right hand like a baseball pitcher coming down off that mound. He’s got so much height to it that if you don’t get out of the way of it and stay close to him, he’ll cream you. You’re going to have to take a few, just make certain that you’re close when he throws it because he prefers you to be far away but he’s good. He’s very good.

“Wilder is only just getting some credit because nobody has been paying attention to the heavyweight division until now. I think that the good thing about Tyson Fury is that he’s brought some action back into the heavyweight division. He crossed the big pond and fought the best guy that we have here. It’s going to take three years now before we go back to sleep again.”