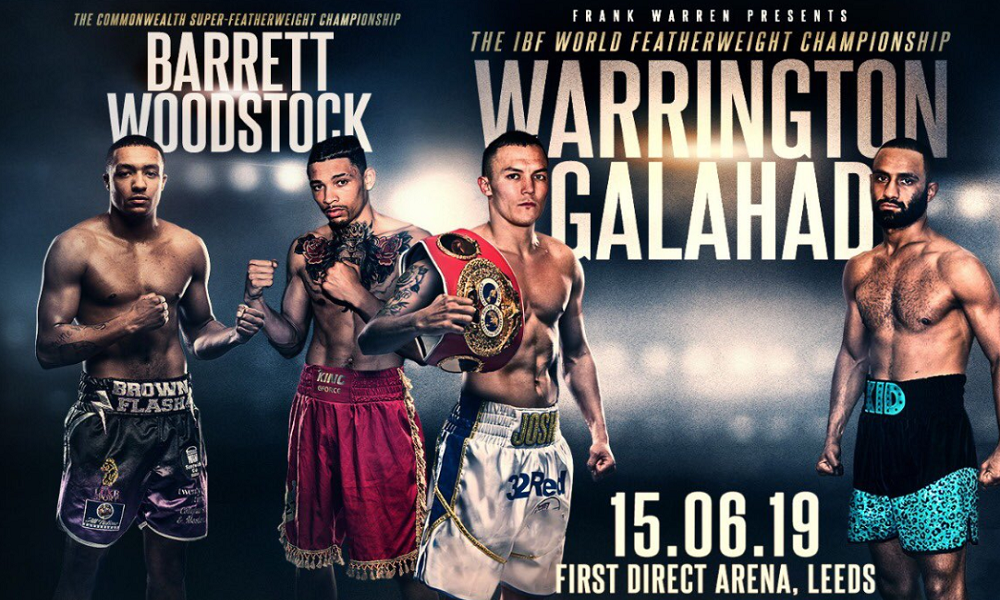 32Red ambassador Josh Warrington makes his first appearance of 2019 this weekend when he defends his IBF featherweight world title against unbeaten Yorkshire rival, Kid Galahad, at the First Direct Arena in Leeds.

With 32Red’s Zelfa Barrett meeting Lyon Woodstock in an attractive fight and James Metcalf clashing with James Welborn in another pick ‘em matchup, boxing fans are in for a treat. For all the latest fight odds, visit our sportsbook.

“I’ll tell you what, it doesn’t get much better than this,” boxing promoter Frank Warren told 32Red. “Every one of them is a good fight. There’s not a bad fight on the card and there’s a case for everybody involved.”

For the first time, Warrington goes into a world title fight as the favourite. Expectation brings a different type of pressure and Warrington will also have to deal with an entirely different challenge in the ring.

Sheffield’s Galahad will know that his best shot at victory is to avoid the type of toe to toe warfare that Warrington managed to drag both Lee Selby and Carl Frampton into. It could prove to be a tricky night for ‘The Leeds Warrior.’

“Josh has gone into his last couple of fights the underdog but performed like an odds on favourite,” Warren told 32Red. “This fella presents a different style for him there’s no doubt about that.

“He’s an Ingle fighter and a lot of people are thinking about how difficult it’s going to be for Josh to cope with that style but I think it’s going to be the same for Galahad. Is he going to cope with Josh’s style because nobody else has managed to yet. He’s hit a great run of form and I don’t think he’s hit his peak yet.”

Galahad wasn’t at the top of the list of preferred opponents but part of being a world champion is defending your title against all comers. Joe Calzaghe managed to maintain his focus for almost a decade before finally getting the acclaim and big fights he deserved. Warrington won’t have to wait that long; beating Galahad should open the door to some massive nights.

“You’ve got to keep the faith and work your way through it. I remember Ricky Hatton wanted the Kostya Tszyu fight badly. The route we took was to get him into an eliminator – which he won – and then rather than do the fight straight away, I dragged it out for a little while,” Warren remembered.

“Tszyu been out of the ring and had an operation so we decided to let him get a bit more ring rust and that worked. They have to keep their eye on the ball and focus. I don’t think there’s any love lost between the two of them and Josh is determined to make a statement on the night.”

Should he retain his title, Warrington will instantly be on the phone, pestering his promoter to secure him a big fight in Las Vegas. Warrington keeps having to reassess his goals and has now set his heart on unifying the division with the big names on the other side of the Atlantic.

“He has. Please, God, he comes through it from our point of view. Carl Frampton is going to be challenging the WBO champion, Oscar Valdez, within the next couple of fights and if he were to win, what a rematch that would be in a title unification. Obviously that’s down the road but it’s the ideal situation.

“Nothing is certain in boxing. We saw that a couple of weeks ago.”

An eye-catching fight between 32Red ambassador, Zelfa Barrett, and the one man riot from Leicester, Lyon Woodstock, will provide the main support to Warrington v Galahad. Both lost their unbeaten records last year in exciting fashion but will now contest the vacant Commonwealth super featherweight title.

“You’ve gotta admire the pair of them for stepping up to the plate but they both have. They both really fancy it and I think this is going to be great for the fans. It’s a great fight and I think there’s a case for both of them. I don’t know what the betting is but I think it’s a pretty even money fight.

“I’m not a big believer in the idea that if a fighter loses its the end of their career. It happens to a lot of fighters and it’s the good ones that prove they can come back from it.”

Josh Warrington exclusive diary: We’re training to do a real job
Lyon Woodstock exclusive: Nobody has seen the real Lyon yet