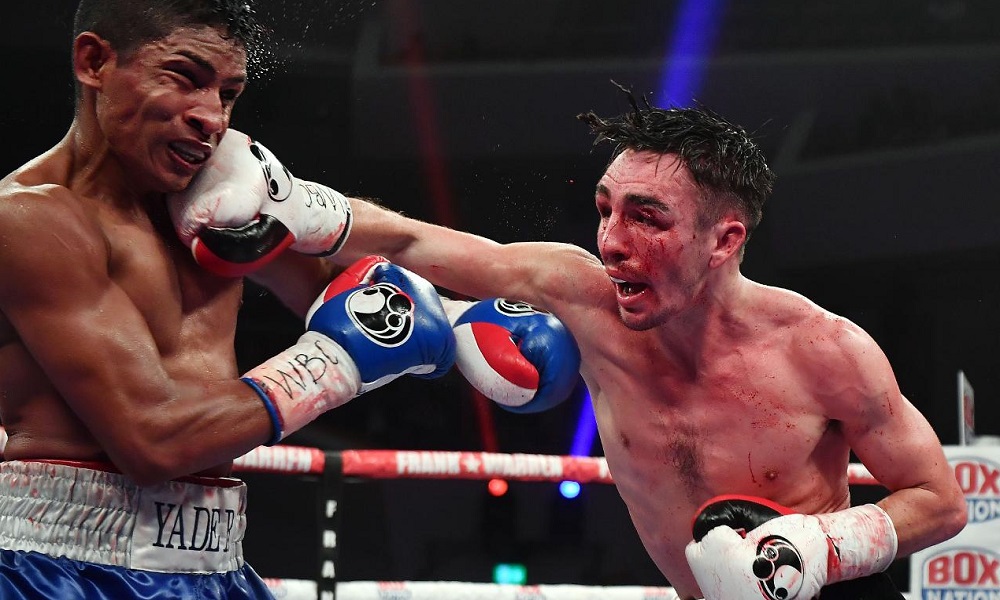 There have been times in Jamie Conlan’s career when the goal of claiming a world title belt has taken a backseat to the task of simply surviving the next ten seconds.

Images of Conlan’s struggles are etched into the minds of British boxing fans and each moment of bravery has generated more goodwill towards the unbeaten 31-year-old from Belfast. Conlan’s route to this Saturday’s IBF super-flyweight title fight with Jerwin Ancajas has taken him to hell and back and having come so far, he is in no mood to relax and simply enjoy the occasion.

“When the fight were announced loads of people were getting in touch to say well done or congratulations. The fight hasn’t happened yet. It’s only another fight so save the congratulations for afterwards,” Conlan (19-0, 11 KO’s) told 32Red. “Getting the fight is only part of the battle, now I have to go in there and win it. Everybody seemed to be pleased and over the moon that we had the fight but we have a professional job to do. Over the past twelve or 13 weeks we’ve sat down and looked at every possible clip. We’ve been meticulous in our approach and we’ve covered every angle.

“I don’t know if people are underestimating my ability but I think some see it as a big underdog story. I agree. When you look at both of our records you have to admit that I’m the underdog for a reason but I’m very confident in my ability and the stuff I’ve been doing. I wholeheartedly believe that I will become world champion.”

At some point on Saturday night, Conlan will once again be forced to dig deep and fight. Those who witnessed him bang the canvas and summon the courage to get up and walk into another barrage from Junior Granados or peer up from the floor through a badly swollen eye at a rampaging Anthony Nelson will know that he has yet to be found wanting when forced to rely on his heart, but he will need more than desire if he is to be successful at world level. It is a message his trainer, Danny Vaughan, has spent weeks drumming into him.

“The worst case scenarios have sometimes worked out to be the best case scenarios for me. It’s something we’ve tried to cover in camp. We’ve picked up certain things along the way and the hard work is done. I’ve very excited in myself at the performance that is inside me.

“We’ve covered all bases. We’ve brought in tough Mexican sparring partners and we’ve stood and fought in the centre of the ring for eight or ten rounds. We brought in movers who we had to keep at bay. We’ve covered everything. No matter which way this fight turns – and it will turn – we’ll have it covered. It doesn’t even matter what he brings, I’m only worrying about what I’m going to do.”

With so much footage available online nowadays it is rare for an opponent to arrive on these shores as a surprise package but Conlan has also had the opportunity to see Ancajas operate at close quarters. Back in July, the Filipino defended his title on the undercard of Jeff Horn’s upset victory over Manny Pacquiao. Also on the bill was Jamie’s brother, Michael. The trip to Australia to support his brother doubled as an invaluable fact-finding mission and allowed him to see how a world champion in one of boxing’s most talent-laden divisions handles himself during fight week.

“In the flesh he looks like he could have a go a bit more than he does on screen. It looks like it could be a very exciting fight at times and in person he was very composed under every circumstance. He didn’t get flustered at all and he’s a world champion for a reason. You can see the level of him. He was impressive. Very, very impressive.

“If you look at the whole top 15 at super-flyweight, every fight is a hard fight and you have the likes of Juan Francisco Estrada who aren’t even world champions. The depth in the division is fantastic and it’s a who’s who of world boxing. To be coming from the outside with this underdog stature it’s really exciting to be in the mix.”

It is eight years since Conlan turned professional. In that time, whilst some of his contemporaries have ascended to major title level and others have faded away, he has done everything asked of him. His rise has been slow but his big opportunity has finally arrived. On Saturday night, Jamie Conlan will walk out to face the biggest challenge of his career backed by the same fans who have been behind him every step of the way.

“There’s a will to win inside me that I don’t think can ever be broken. I’m always happy for everybody else and I never got envious or jealous of other peoples achievements but I’m always trying to better myself and I’m very hard and critical of myself. I’m always trying to get a bit extra and push a bit more. When I’ve been put down in fights, I’ve shown the real me.

“There’s a hunger and a will to win inside me that’s insatiable.

“There is no real pressure on me on Saturday. Everybody was so happy for me simply to get the shot that there’s no pressure on me. I’m going in there to perform in front of the same people who were there for me at the Ulster Hall or the Medway Park Leisure Centre. The same people who were there watching me at midnight in an empty Odyssey Arena after the main event had already happened. I’m over the moon that it’s in Belfast and these people who have spent their hard-earned money watching me will get to see it.”

Jamie fights on Saturday night – to see our latest boxing markets, check out 32Red Sport here. If you’re up for a flutter on table games or the slots, be sure to check out our award-winning casino too!