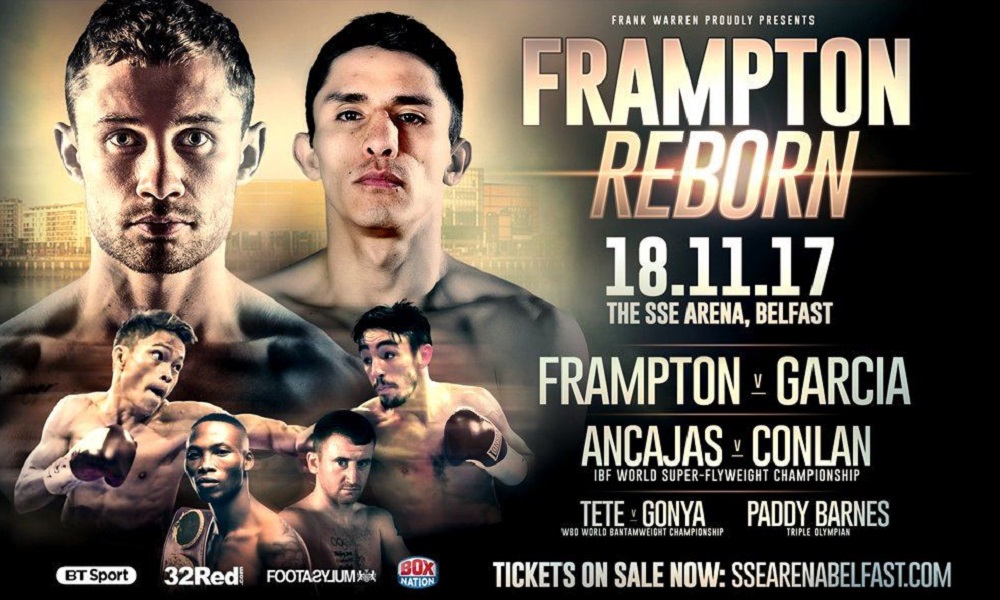 Belfast hero and brand new 32Red ambassador Carl Frampton steps back into the ring this weekend for the first time in ten months and while Frampton is rightly expected to walk away with a comfortable victory against Horacio Garcia at Belfast’s SSE Arena, there may well be some interesting betting angles available for what at first glance, the odds would suggest is a one-sided contest.

Off the back of two encounters with Mexican foe Leo Santa Cruz, a last-minute show cancellation earlier in the year and a promotional, managerial and trainer change, Frampton’s opponent is understandably there to help showcase his skills ahead of stiffer challenges against the likes of Lee Selby or Josh Warrington in 2018. The strength of the undercard and the desire to see Frampton back in action is strong enough that no used car salesman patter has been needed to attract attention for ‘Frampton Reborn’…. Frampton himself has been very clear on the fact he should be beating opponents like Garcia with a fair bit to spare.

When you’re looking at a 1/100 favourite, there’s no point suggesting anything other than the fact we’re trying to pick how and when the Jackal wins.  We know what Frampton brings to the party – a two-weight world champion, wins over quality fighters like Martinez, Quigg and Santa Cruz and the current Ring Magazine fighter of the year – so I’ve been making my selections based more on what the lesser known Garcia can do. (Garcia starts a 16/1 shot)

Garcia has been in with top-level opposition before and if you have seen anything of him, fights against 2012 U.S. Olympian JoJo Diaz (a wide points loss), former bantamweight champion Hozumi Hasegawa (another wide points loss) are probably where you’ll have come across him. Style-wise, he’s exactly what you’d expect from a Mexican fighter who trains in the same tough Guadalajara gym as superstar Saul ‘Canelo’ Alvarez. His apologetically thrown jabs and plodding footwork won’t be posing too much trouble, but twenty-four knockouts from thirty-three fights show he can dig a bit and it’s the left-hook he’ll be looking to land on Saturday. This is the shot which earnt him a fourth-round stoppage in his last outing and if you’re looking for a reason to justify a Garcia win, this would be your angle for a 25/1 punt on the stoppage.

The other thing you’ll take-away from watching Garcia is that he’s wide open to counter-punches. His feet and hands aren’t particularly sharp and he tends to stop to admire his work after going on the attack. Against an exceptional back-foot fighter like Frampton this is where the gulf in class will show on Saturday. The Jackal is a level above JoJo Diaz for me and if the young American was bouncing punches off Garcia for fun, you’d have to expect Carl will have no problem doing the same. Neither Scott Quigg, nor Kiko Martinez are shy in being aggressive and looking to land a left-hook and the Northern Irishman didn’t have too much bother dealing with either of those men earlier in his career.

Based on all of this, it’s unsurprising that the Frampton KO/TKO price is 2/5. However, it’s not the bet for me. While Garcia is technically limited and I can’t see him having much, if any joy this weekend, he’s never shown any weakness in his chin to suggest he’ll go over easily. It’s also worth bearing in mind that this fight is scheduled for ten rounds, not the full championship twelve. My pick is for Frampton to win every minute of every round against an over-matched opponent, but I suspect the tough Mexican will hear the final bell and Carl Frampton to win on points at 7/4 is my selection for the main event.

While Frampton will gain the headlines ahead of the show, the chief-support of Jamie Conlan v Jerwin Ancajas may well steal them on Sunday morning. Conlan has a lot of natural ability, but seems to have a desire to park that and go to war every time he fights. His career record of nineteen outings and nineteen wins would make you think he’s been carefully guided towards his crack at the IBF Super Flyweight title, but there’s an awful lot of miles on the clock for a relatively short career when you watch his fights.

Conlan got to this position the hard way and fittingly for the way his career has gone to date, he hasn’t been handed a soft-touch in his title chance. His opponent, Jerwin Ancajas, has developed on the undercards of fellow Filipino Manny Pacquiao and has looked very solid since winning his title back in 2016 against McJoe Arroyo. Two defences have ended in two stoppage wins and I suspect his bout this weekend will fail to hear the final bell too. The way both men fight means we’re unlikely to get anything other than an all-action affair from the first round and personally I can’t see this going further than the half-way point. I’m a big fan of Conlan and genuinely hope I’m proven wrong, but the 6/4 on offer for Ancajas to win between rounds 1-6 is my pick. It will be a lot of fun while it lasts and I wouldn’t put it past Conlan to have some early success, but old habits die hard. Lapses in concentration can be overcome against 22-10-1 opponents like Yader Cardoza, but at world-title level, they rarely go unpunished.

Continue Reading
You may also like...
Related Topics:Carl Frampton, featured