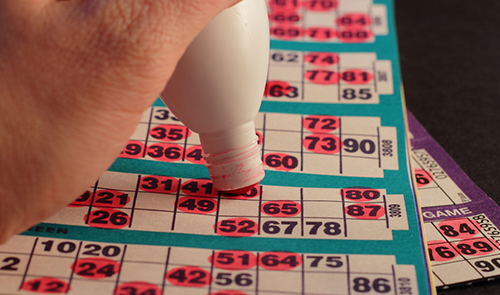 You’d be forgiven for thinking only little old women play bingo. But that out-of-date stereotype couldn’t be further from the truth. Now the game has moved online, people of all ages are playing and bagging J-Lo’s bums (71s) and Gareth Gates (8s) on their virtual scorecards. But how did the game become an online phenomenon? And where did it all begin?

You probably won’t be surprised to hear the game originated in Italy. After all, it is the country that created the world’s two best things – pizza and pasta! The game developed out of the Italian lottery, Lo Giuco del Lotto d’Italia in 1530. It then slowly spread across Europe and eventually, America. Obviously, they couldn’t get enough of its Pompey whores (No. 24s!)

One for the lads

Funnily enough, bingo was mainly played by men in its early days. When Le Lotto took off in France in the 1700s, it was only wealthy French gents who could afford to play. When it made its way over to us Brits via the French, it was soldiers who first played it to pass the time, during World War II. At that stage, it went by the name ‘housey-housey’, or ‘beano’ in America. After getting all his numbers, one over-excited American player shouted ‘Bingo’ by mistake. Thus B-I-N-G-O was born!

Fast forward to the sixties and bingo was booming in Britain thanks to the 1960 Betting and Gaming Act. The new laws gave Brits the thumbs up to get their gambling on. Bingo became so popular that almost a quarter of the population was playing it by 1966. Suddenly bingo halls were getting a lot of knocks at the doors (4s).

A hit with the ladies

So why did it become such a hit with little old ladies? Our best guess is it gave women something to do, other than join their fellas down the pub. Plus, there was the huge social aspect. In the sixties, the game was so popular, bingo lovers could travel to the seaside to play, on special bingo trains. Once they were done, they’d be brought all the way back again! All that saucy bingo lingo also made the game great entertainment. Fancy a sexy Kate (no. 8) or a dinky doo (no. 22)? Don’t mind if I do!

If you wanna be my (bingo) lover

The nineties may be best known for the Spice Girls and Brit Pop. But’s it’s also the decade when the internet came along – and with it a new world of online bingo. Cyberbingo was the first to launch a bingo site online in 1996. Many companies soon followed suit bringing bingo to tablets and smartphones too. By 2011, the first bingo app on Facebook debuted and with it bingo started winning with lots of stroppy teens (15s).

Today, there are hundreds of bingo sites. Newspapers, fashion brands and even TV companies are getting on the bandwagon. And although over 70% of players are women, it’s soaring in popularity with young, trendy, twenty-somethings. But with so many online bingo sites to choose from, it can be tricky knowing where to start.

That’s why here at 32Red, we offer a no nonsense online bingo site and with games starting from just 1p, it couldn’t be easier to play Play our 90 Ball game and you could win some big prizes!

But before you do, make sure you share your favourite bingo call with us. Is it droopy drawers (44) or I love my Mum (51)? Tell us below.