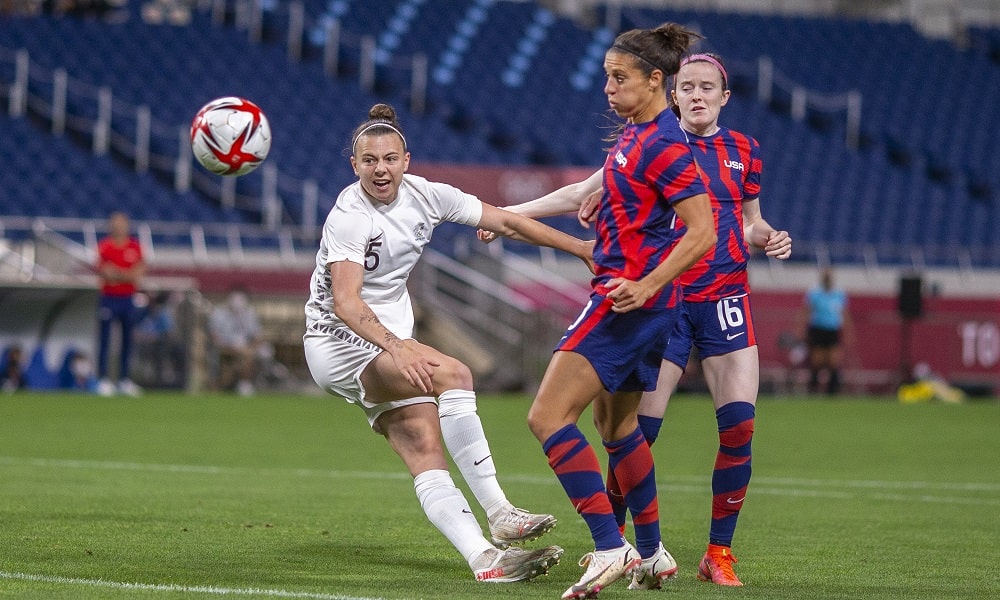 After Meikayla Moore’s meltdown, check out the greatest Premier League own goals ever

Own goals are generally a pretty traumatic experience for the player involved. So spare a thought for Meikayla Moore.

During a SheBelieves Cup match against the USA on Sunday, the New Zealand and Liverpool player scored THREE heart-sinking own goals in the space of 36 minutes.

The match ended 5-0 to the American hosts – though Moore had long departed by that point.

Two of the defender’s own goals came in the first six minutes of the match, Moore initially scoring with an attempt to block a cross in the fifth minute. The 25-year-old then found the net again just one minute later, albeit through a header she didn’t know too much about.

And when Moore guided a third goal past exasperated goalkeeper Erin Nayler half an hour later, the keeper’s hands-on-hips “are you kidding me” reaction was all too understandable.

Adding to Moore’s misery, the goals were scored with left foot, right foot and head. That’s technically a far-from-perfect “perfect” hat-trick. And not the way the player would want to have celebrated her 50th appearance for the Football Ferns…

At least Meikayla can console herself with the knowledge that there have been similar howlers in the history of football. Much as the players responsible might want to forget them, we’ve dug out some of the most memorable here.

“Oh, what an embarrassment!” Playing for Aston Villa against local rivals Birmingham City in 2002, Finnish goalkeeper Enckelman failed to control a simple ball from a throw-in from his teammate Olof Mellberg – with Enckelman’s disastrous touch somehow deflecting the ball into the net.

Birmingham would go on to win 3-0, with Villa boss Graham Taylor moved to say afterwards, in impeccable Taylor-speak: “very few people have seen the likes of that. That didn’t help the matters.”

The Manchester United man might have had a tough time of it in recent years, but even back in 2012 Jones was capable of elite level errors. His own goal against Newcastle is a thing of beauty, Jones’ stooping to nudge a deftly placed header past Anders Lindegaard.

Phil could console himself that the goal came deep into stoppage time, when Man United were already two goals down. But even if the outcome was unchanged by Jones’ dramatic late contribution, it was still a wonderful/diabolical way to end the game, depending on your allegiance.

In this 1994 appearance against Arsenal, Eddie could have been forgiven for thinking he was about to save the day. The Ipswich Town man sought to clear a dangerous Anders Limpar cross and keep the Gunners at bay.

Instead, the defender got his timing all wrong. Youds’ wild attempt at a clearance failed to connect properly, with the defender seemingly tripping himself up. In the process, he also managed to send the ball bobbling lazily into the net.

If this goal had occurred at the other end of the pitch – and, you know, Tony had meant it – the finish would have been acclaimed as some wonderful Messi-esque piece of improvisation.

Playing for Crystal Palace against Portsmouth back in 2004, the Australian sought to deal with a ball into the box with a hopeful outstretched backheel. Alas, with the insolent logic of a nightmare Popovic’s connection sent the ball gliding off the post into the top corner of the goal, much to the player’s visible disbelief. Bizarre, ridiculous – yet also kind of majestic.