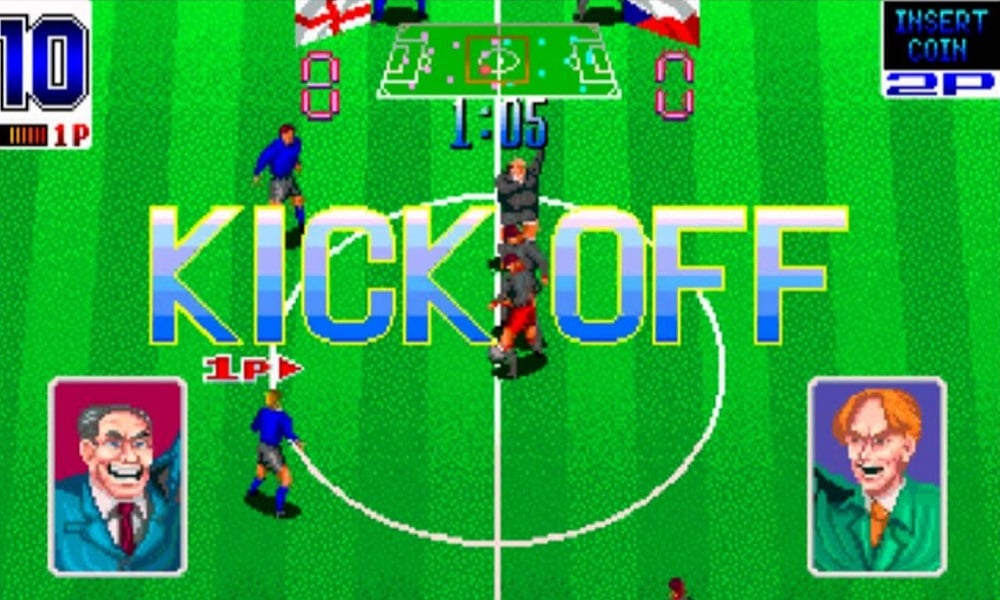 Fed up with FIFA? Pro Evolution Soccer lost its pizzazz? If you need a vacation from your PlayStation, no probs – these days, we’re all about the retro videogaming when it comes to soccer sims.

Remember these classics of the football computer game genre? This old school action is as raw as it gets… 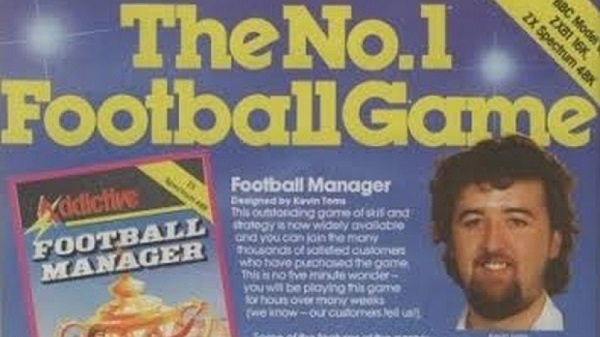 This pioneering release has the distinction of being the first ever football management simulation – and in its day, it was a massive hit, selling some 500,000 copies. Players could take control of real-life teams and players; with the likes of Kenny Sansom, Kevin Keegan and Cyril Regis available to buy or sell for the first time, it was easy to see why football dweebs went daffy for this game.

That was even factoring in the graphical representations of the action – rudimentary line drawings and tiny, barely moving players – that don’t really hold up for the seasoned player in 2019. Never mind though – the gameplay, though simple, still seems to appeal to a certain audience, with Kevin Toms recently releasing a modern-day version for your mobile phone…

Any mention of this game is dutybound to make note of unlikely narcissus Toms’ ubiquitous presence. The game creator plastered not just his name, but photos of his bearded face all over the marketing material for this release. An unusual decision, but developers were making things up as they went along back in those days… 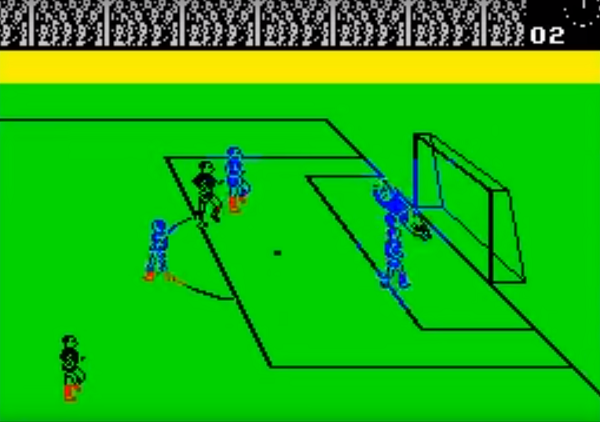 This was one of the oldest attempts to translate the footballing experience to the home computer – and very popular it proved too, despite the Speccy’s humble abilities.

Published by classic British game publishers Ocean Software, the game was understandably low on frills, given the limitations of the technology. But with a side-on perspective and gameplay that captured the broad strokes of the beautiful game, Match Day is still fondly remembered – perhaps more for its novelty than for anything more.

With quite the bleepiest interpretation of the Match of the Day theme tune ever heard, and players strolling around the pitch like Victorian gentlemen on a Sunday outing to the park, as a crowd seemingly made up of lookalikes from Edvard Munch’s The Scream looked on, this isn’t quite the full-blooded experience of the modern-day football simulation – but back then, Match Day was as good as you were going to get.

Modern day gamers may be unaware of the lengths players used to have to go through just to get the game up and running, incidentally – rather than a disc, players needed a tape player to load the game, sitting back for five minutes as shrill atonal noise emitted from the telly. Okay, so not everything was better back in the eighties. 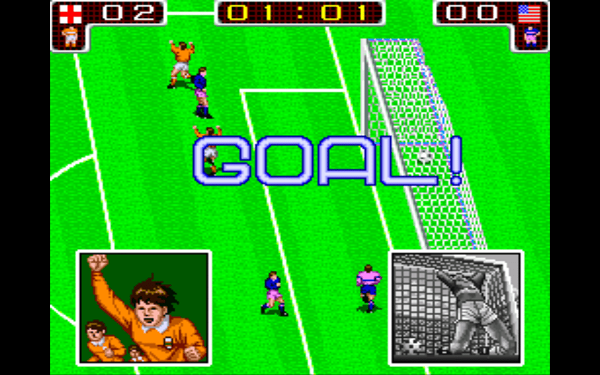 This is more like it. By the end of the eighties, games developers had succeeded in creating a footballing game that captured something of the excitement of proper football.

This arcade game used a familiar side-on view akin to Match Day, but with rather more realistic ball and player behaviour – players could pass and shoot with something approaching an approximation of the real thing, head the ball and even slam in an overhead kick from the right position.

Highlighting the in-play character with a headache-inducing shimmer effect was maybe due a rethink, but by and large Tecmo got a lot right here – including the ability to fly in with a reckless tackle without having to worry about an overzealous referee slowing down the action.

The patterns and routines of this coin-operated game might be a little unsophisticated by current standards, but this release still remains fun some 30 odd years on. 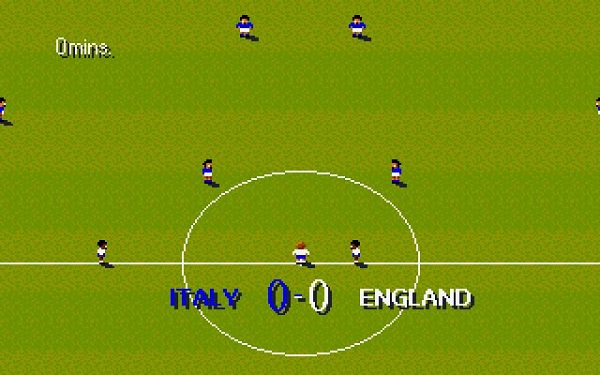 One for the purists, Sensible Soccer’s tiny players felt graphically like a step back compared to the arcade thrills of Tecmo World Cup. But the fast-paced action and unconventional approach to gameplay means that fans of a certain vintage get very misty eyed about this one.

Never having owned an Amiga, I didn’t get to play ‘Sensi’ at the time of release, but its visual approach is definitely a departure from the norm, with the action viewed from above, bird’s-eye style.

The gameplay feels notably different too, with the sheer speed of the action making this game stand out from its rivals. There’s also an “after touch” feature, which meant that once you’d kicked the ball you could control the curve of the shot – sometimes to ludicrous effect. Still, for the most part this was simple, straightforward, accessible – and there are plenty of old school players who would still choose this over the latest version of contemporary footie games in a heartbeat. 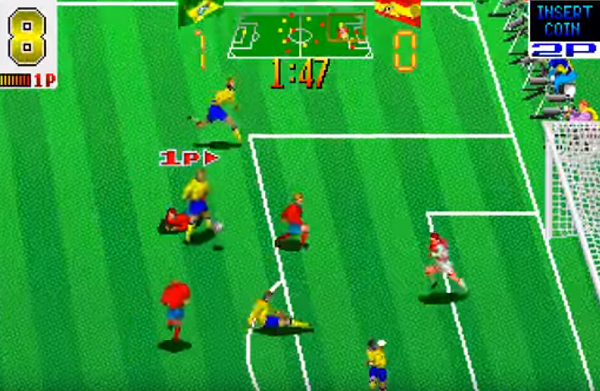 Back to the familiar side-on view for this much-loved arcade classic from Japanese developers Taito. Football Champ was like an evolution of the Tecmo World Cup arcade game, with more detailed, cartoon-like visuals and a greater range of moves.

Players could be shown red cards for fouls (players could aim flying knees at their opponents, or even punch them), and we got to see the disgraced player running off the pitch in shame – and sometimes falling over in the process.

But if Football Champ brought a somewhat slapstick approach to the job of bringing home all the atmosphere and excitement of a big game, the action was diverting too. As well as entertaining moves like headers and overhead kicks, players could also score using a Super Shot technique in the closing seconds of the game.

With this shot, by controlling the team’s star player you’d be able to hit the ball with such unimaginable force that it would send any goalkeeper standing in its way flying, as the ball soared unstoppably between the posts.

Okay, so in retrospect it was all a bit silly – but for all that, Football Champ was brilliant for a two-minute blast of soccer insanity. Honestly, we’re feeling very nostalgic right now…