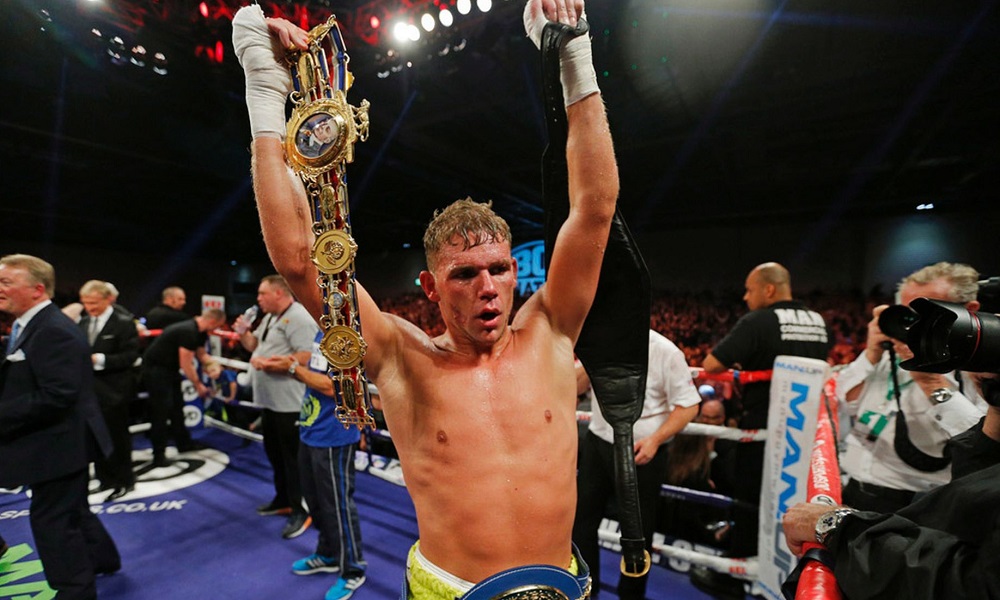 On Saturday night, Billy Joe Saunders makes the second defence of his WBO middleweight title against Willie Monroe Jnr and the realisation that he is so close to mixing with the world’s elite seems to have dawned on Saunders.

So far, the unbeaten 28-year-old’s title reign has been one of false starts and frustration but a dominant victory over his talented American challenger will put him in pole position to face the winner of the massive showdown between Saul ‘Canelo’ Alvarez and Gennady Golovkin. It is time for Saunders to start living, training, and fighting like a world champion.

Saunders (24-0, 12 KO’s) acknowledges that Monroe (21-2, 6 KO’s) possesses the raw materials to provide him with a difficult night’s work but feels that he may lack the know-how and –  maybe more importantly – the desire to implement them. Saunders’ suggestion that he quit during the sixth round of his challenge for Gennady Golovkin’s middleweight titles back in May 2015 hasn’t sat well with Monroe. Usually a quiet customer, the New Yorker has fired back with accusations that Saunders has avoided him in the past and insists that he will pay for his remarks this weekend.

“He’s a good operator. It’s going to be a good test to see where I stand at the elite level,” Saunders told 32Red. “I’m looking forward to it. I’d say that he could  be my toughest opponent to date but I think that I’ve been in the ring with more experienced people than him. Look at Andy Lee. He’d had more knockouts than Monroe has had fights. I’ve been in there with some good fighters but we’ll see how it pans out on the night. He’s said a lot so we’ll see how it all unravels.

“The fight with Monroe has never been close before. He’s talked about it but he’s a mandatory now so we’ll get this one out of the way and then we’ll move on,” Saunders said. “The way I look at it is that whatever I say to him isn’t going to change him. He’s not gonna listen. I was just telling the truth. I didn’t say anything that was lies just to get to him. In the biggest fight of his life and on the biggest stage of his life he quit. He was fighting for every title.

“He’s been in a big fight. He’s got that experience I suppose and I know what he did with Golovkin. I want to do one better.”

Monroe fought Golovkin in the midst of the Khazak destroyer’s incredible run of 23 straight knockout victories. After the fight, his name became no more than a byline in the Gennady Golovkin story but after a horrendous opening, Monroe fought well. His fast hands created plenty of openings and the southpaw was accurate enough to take advantage. Monroe was never on the verge of victory but he did provide the middleweight division with proof that Golovkin isn’t untouchable. It would be a big mistake to allow the fight’s conclusion to overshadow his ability.

“I’m certainly not underestimating him. He can do a lot of good things but all that got undone by giving up. He beat the count and he quit. You don’t do that at this level because if you do quit, you don’t belong at this level. Simple. Not only that, now he’s done that once it’s probably taken something out of him. After that fight he probably sat down and asked himself whether he really belongs at that level. Is he over it yet? I don’t know. Will he be the same fighter? Let’s see.

“He’s got his shot now so let’s see what he does with it.”

After a spell of turmoil which saw him twice change trainers, Saunders’ passion for the sport has been reignited by moving to Sheffield and joining up with Dominic Ingle in the famous Wincobank gym. As an amateur, Saunders spent time training in the Steel City ahead of the 2008 Olympic Games. Judging by the photographs and video footage released from his training camp, a return to the disciplined regime he endured during his time boxing internationally for Great Britain seems to be serving him well.

“Working with the Ingle’s and working back where it all started makes memories flood back. I’ve really put the work in in this camp. It’s been 13 weeks of constant training. I haven’t been home but it’s paid off so far and it’ll pay off on Saturday night.

“Sheffield’s alright. It’s work. It doesn’t matter where we go, it’s all just work. I’m under good guidance here with the Ingle’s and everyone is enjoying themselves.

“A lot of people don’t understand what I used to go through to make weight and get into shape. When I look back at it, to think that I’m world champion by doing that it’s a bit frightening. I know this time there’s going to be a hell of a difference. When you’re dry and you still have to get six or seven pounds off, it’s horrible. Am I going to be a brand new man in there and be some kind of animal? I don’t know. I feel good and the training and sparring has gone well but it’s all about what happens on the night.”

The middleweight world has continued to turn during Saunders’ troubled eighteen months. Titles have changed hands and new faces have emerged and disappeared but Saunders remains exactly where he was, right at the centre of the division. Should the winner of this weekend’s megafight between ‘Canelo’ and Golovkin decide they want to complete the belt set at 160lbs, the path to fully unifying one of boxing’s blue riband weight classes runs directly through the man from Hatfield. Given his problems during that period, Saunders could be forgiven for feeling some sense of relief that he has managed to maintain his status and standing.

“Not really because for somebody to take that away from me, they’re going to have to beat me for it. I’ve signed to fight a few big fights this year and they haven’t happened. I’ve been unfortunate at times but I’m still here and I’m ready to fight anybody. They put the contract in front of me and I’ll sign. Chris Eubank Jnr twice, Golovkin twice, ‘Canelo’ twice and then Avtandil Khurtsidize. They’ve all fallen through. I’m fortunate enough to still be where I’m at but I will be capitalising on it, that’s for sure.”

Once the final bell tolls on Saturday evening, Saunders’ thoughts will turn to events in Las Vegas. He will have a far keener eye than most on proceedings, given that he is likely to be next in line for the winner.

“I fancy Golovkin. I just think ‘Canelo’ looks a little bit over trained and a bit over done. I think he’s put a little bit too much muscle on. I can see where they’re coming from by bulking up because Golovkin is the bigger man. Is that going to suit ‘Canelo’? I don’t know.”

BJ fights on Saturday night – to see our latest boxing markets, check out 32Red Sport here. If you’re up for a flutter on table games or the slots, be sure to check out our award-winning casino too!

Willie Monroe Jr exclusive interview: I haven’t been this motivated in a long time
Canelo v GGG Preview: We’ve had the event of the year, now for the fight of the year