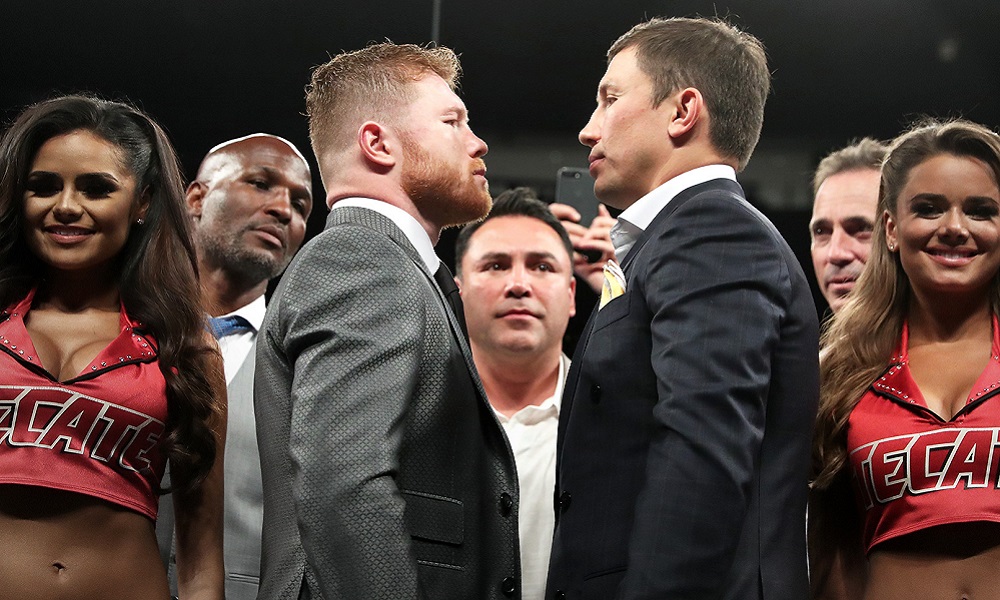 In the early hours of Sunday morning, the T-Mobile Arena in Las Vegas will be the scene of the most eagerly anticipated middleweight fight since Bernard Hopkins v Oscar De La Hoya more than a decade ago. Almost 13 years to the day of that fight, unbeaten WBC, WBA and IBF titleholder Gennady ‘GGG’ Golovkin will go toe-to-toe with the latest in a long line of Mexican boxing superstars, Saul ‘Canelo’ Alvarez. You can bet on the fight here.

Coincidentally, Hopkins and De La Hoya are now both shareholders in Golden Boy Promotions, Canelo’s promoter and while they’ve done the utmost to (legitimately) sell the chances their man has of success this weekend, they’ll be hoping the result doesn’t go the same way as their 2004 encounter. That night, the lower profile, but long-reigning and longstanding middleweight (Hopkins) stopped the younger ‘A side’ fighter (De La Hoya) with a body shot in the 9th round. There is a very good chance history could repeat itself here.

In boxing terms, this is about as close to a ‘pick-em’ fight as you’re going to see. Canelo starts as the slight underdog at 13/10, while GGG is currently available at 8/13 for the victory. In a contest legitimately as debatable as this, the draw is also a very tempting 22/1, but more on that later.

There are plenty of reasons for Canelo backers to be optimistic. At 27, he’s reaching what should be his peak boxing years, something you must take into account when his opponent is now 35. You can make a strong case that his only loss, against Floyd Mayweather in 2013, has some caveats… Youth and inexperience may have played their part, but the acceptance of a catch-weight limit of 152 pounds almost certainly dented Canelo’s chances that night. That’s not to say he’d ever have won… he almost certainly wouldn’t… but boiling himself down that night probably contributed to the fact he lost pretty much every minute of every round.

Unrestricted by a draining weight limit, Canelo has since gone on to win seven on the spin, but more importantly he appears to have learnt from the experience and technically matured. He won’t have all the advantages on Saturday, but his counter-punching ability and defensive skills which have come on leaps and bounds in the last couple of years are two clear ones. They will however, be tested to their limits on Saturday.

My personal hesitancy in backing Canelo, comes from scratching the surface on those seven opponents. One points victory is widely contested – Erislandy Lara. Three were against opponents who’d inarguably seen better days – Julio Chavez Jr, James Kirkland and Alfredo Angulo and the final three, were carefully selected (in-part) due to their size disadvantage – Amir Khan, Miguel Cotto and Liam Smith. GGG will represent the first, legitimate, elite-level middleweight Canelo has faced and put simply, I’m not sure he’s sufficiently battle-hardened at the weight.

The obvious counter argument to that is that GGG’s resume isn’t exactly littered with a ‘who’s who’ of boxing’s star names and here is where my rationale for backing the Kazakhstani requires a little trust. Boxing is a series of individual business deals where the bigger draw essentially gets to dictate their terms. Canelo has, in every fight since Mayweather, been THE draw. In short, he’s brought high risk, but high reward to the table for opponents and they’re happy to go along for the payday. If he’d wanted to face legitimate middleweights to acclimatise himself at the weight, he could have easily tempted them instead. This then begs the question why he chose not to?

GGG however, offered a less obvious ‘reward’ to the obvious risk in fighting him. Bigger names such as Carl Froch, Andre Ward and Mayweather have been discussed, but none have ever materialised. You suspect, not for the lack of trying on GGG’s side.

GGG’s reputation has instead been built on volume and consistency at the weight. He’s nearing 20 middleweight title defences and he’s almost always knocked those opponents out. Only Danny Jacobs has heard the final bell and even he was forced to pick himself off the canvas in doing so. It’s this freakish power punching which has slowly but steadily seen him build a following and based on that alone, you have to think the 31/20 available on GGG winning by KO is value.

It’s not all just brute force though, as his amateur record of over 340 victories testifies. In my humble opinion, he has better footwork and a better jab than Canelo and these should be the keys to him winning. The promotion will promise a war, but I suspect that GGG respects Canelo enough to follow a similar path he did with David Lemieux (another monster puncher) in 2015 and stick behind the jab in the early stages before gradually putting the foot down in the later rounds to get the stoppage.

My pick for Saturday is GGG to win by stoppage between rounds 7-12 at 3/1. It will be close and competitive all the way, but the training videos of Canelo, looking unusually muscled, have only added further confidence to this pick. Canelo may look great, but he’ll be carrying more bulk than he’s ever carried before into the later stages and personally I wouldn’t want to be running out of steam against a man with a 89% KO ratio.

Are there risks for GGG? Definitely. First and foremost is Canelo’s excellent uppercut. GGG showed he was more than a little susceptible to being caught with that against Kell Brook and Danny Jacobs. While Golovkin may have shown a granite chin so far in his career, you wouldn’t fancy him taking too many of these clean precise shots. The 6/1 available on Canelo to win by KO is a stretch for me to back, but if they start landing early, an accumulation could get the job done.

Second are the scorecards. History would suggest that in close fights, the bigger name tends to get the benefit of the doubt and Canelo certainly has seen some, let’s say, ‘favourable’, scorecards during his career. This is where a small punt on the draw at 22/1 may well be a wise covering bet.  If the action is close enough to warrant a draw this weekend… then why wouldn’t we do it all over again?

Finally, we can’t ignore GGG’s age. It would be myopic of me to insinuate Canelo has cherry-picked favourable opponents, without asking why he’s now suddenly happy to take on the most feared fighter in the sport? The answer may lie in what Canelo’s camp saw in his recent performances against Brook and Jacobs, where while he won, he did lose a small amount of his aura while doing so. I’m prepared to give GGG a pass on these performances, not least because I suspect Canelo would have fared a lot worse against the same opposition, but prior to these fights I would have been far more bullish in selecting the Kazakhstani man to win by stoppage.

Regardless of the outcome, this shouldn’t fail to entertain. Mayweather and McGregor may have stolen the spotlight and to some degree some of the earning potential off this bout, but make no bones about it, this is the real highlight of 2017. If you love your boxing, or even just love your sport, then you should be setting the alarm to get up and order the fight on BoxNation Box Office (coverage sponsored by 32Red!). As the promo says, boxing is at its greatest, when the best face the best and that’s exactly what we have here. Let’s just hope GGG can get the stoppage late and make it a profitable as well as memorable evening for everyone tuning in!

Saul ‘Canelo’ Alvarez fights Gennady Golovkin this weekend – see the latest odds here. And for a wide range of boxing markets, check out 32Red Sport here. If you’re up for a flutter on table games or the slots, be sure to check out our award-winning casino too!