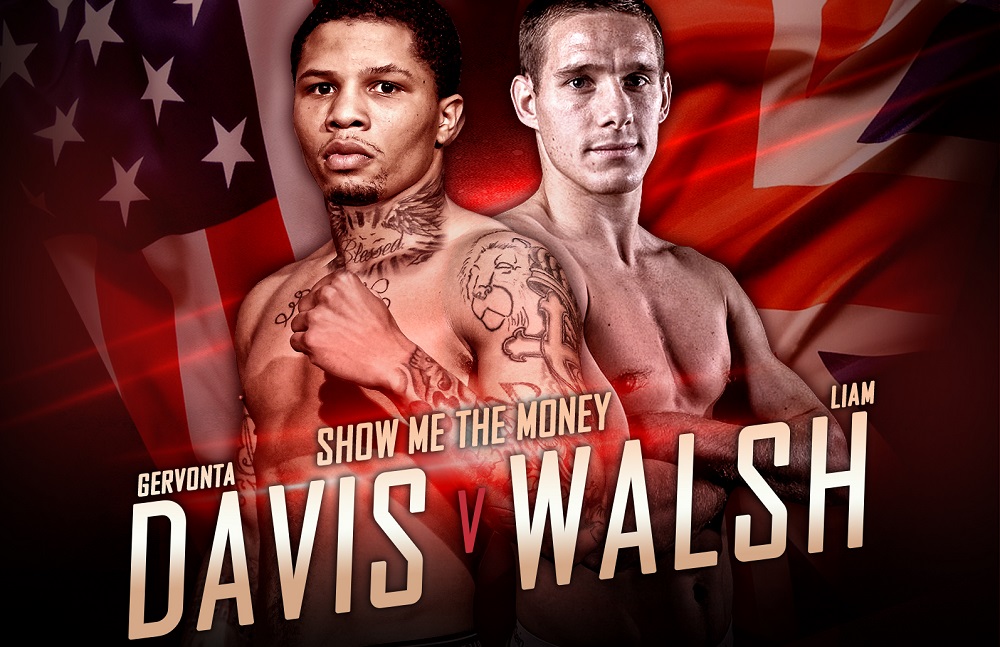 The Copper Box Arena in Stratford gets a taste of Vegas flair this weekend as Floyd Mayweather rolls into town to support the heir apparent to his throne. Baltimore’s Gervonta Davis, widely touted as the next superstar of U.S. boxing, will make the first defence of his IBF World Super Featherweight strap against Cromer’s unbeaten Liam Walsh on another stacked Frank Warren and BT Sport bill.

And while I can’t promise I’ll guide you to ‘Money’ Mayweather type pay-outs, I do have a couple of tasty tips which will add some further excitement to Saturday’s action. See the latest odds here.

Normally, when a newly-crowned champion from the States is sent to foreign soil for his first defence, it’s not a good sign. The alphabet soup of world title belts in circulation these days may be much maligned, but the reality is they still command a decent payday and if you have a fighter in your stable lucky enough to win one, you’d usually put up the money to give them home advantage in their first outing.

No U.S. champion has successfully travelled to the U.K. to defend their title since 2008, when Paulie Malignaggi beat South African Lovemore Ndou on a Ricky Hatton undercard and even that victory has to have a significant asterisk against it, as the match-up was clearly planned with a future Hatton v Malignaggi contest in mind.

More often than not, when a U.S. champ travels to these shores, it’s because they don’t expect to return with their title in tow and put simply, a British promotor has stumped up the most cash to have the privilege of relieving them of their prized asset – see Anthony Joshua’s destruction of Charles Martin as a prime example.

With Gervonta Davis, you’d be hard pushed to argue that he’s only here to cash-out. Davis is exceptionally well thought of, has a profile on the rise on home soil and is only 22 years old. While BT Sport’s new venture into boxing has clearly helped ensure he’ll be well compensated for his work this weekend, Saturday is far from being the American’s cash-out.

Davis’ decision to make his first defence here is more akin to Terrence Crawford, Timothy Bradley, Jorge Linares and Sergey Kovalev seeing a good payday for a British job they see well within their ability, than it is anything close to a Charles Martin situation.

Davis’ reputation is obviously factored into the odds as he starts a 1/4 favourite to get the win. Key to that price is his impressive knock-out record – 16 stoppages in 17 wins with no defeats – and a systematic breakdown of former champion Jose Pedraza to win the belt. ‘Tank’ as he is known, dominated Pedraza up until the seventh round when he ultimately stopped the Puerto Rican and it’s hard to ignore such an impressive victory in what was supposed to be his first stern test. Should Pedraza fight Liam Walsh tomorrow, or even the man he comfortably beat in Stephen Smith, my view is we’d be looking at a relatively closely priced fight. On that basis, you can’t argue with the short odds for Davis.

That’s not to say Walsh doesn’t have a chance of snatching victory and Frank Warren has not stumped up the cash to bring Floyd and Davis to town out of the goodness of his own heart. They absolutely believe that this is their coming out party. Walsh is comfortable in either stance, moves well, has better than average hand-speed and as proven during his war with Paul Appleby earlier in his career, has more than enough toughness to see a hard fight through to its conclusion.

Walsh has 14 stoppages wins in his 21 unblemished appearances and while he’s not a concussive puncher, his performance against Joe Murray in 2015 show his ability to gradually wear his man down with a thoughtful, varied attack. Walsh is 10/1 to win by stoppage and if the rumours of Davis blowing up in weight between fights are true, the latter half of the contest combined with Walsh’s body punching ability could make that a very good shout.

The concern I’d have with Walsh is we’re entering the unknown. With Davis, we’ve seen the ease with which he swatted away the challenge of Pedraza. Walsh has good names on his resume, but injury has occasionally halted his progress and at 31 years old, he doesn’t currently have a performance on his record that stands up to Davis’ stand-out win. The challenger’s ability to switch from orthodox to southpaw is a strength in attack, but could also be his weakness this weekend as it occasionally leaves him too square on to his opponent and open to taking punches. When you couple that with his ‘ear muff’ defensive style I’d expect him to eat more than a few shots from the big punching American.

Personally I can’t look beyond the Davis to win between rounds 7-12 at 15/8. Walsh is good enough and tough enough to keep this fight competitive into the second half, but eventually Davis’ power and skill should tell. It may be some time ago now, but if Paul Appleby’s power was capable of making Walsh touch down in their 2011 war, then I struggle to see a scenario where Davis’ superior pop doesn’t.

In another interesting fight this weekend, I wouldn’t be putting anyone off backing Jose Uzcategui at 33/10 against Andre Dirrell. Dirrell will potentially go down as one of the most talented fighters of recent years to never win a World Title, but unfortunately he’ll have nobody to blame but himself for that moniker. He may have run Carl Froch close in 2009, but on away soil he just wasn’t prepared to dig in enough to get the victory and what followed can only be described as a pitiful run of inactivity, culminating in another loss at the top-level vs. James DeGale. Nine appearances since 2010 show he’s wasted away the prime of his career and I wouldn’t be at all surprised to see that catch up with him against the Venezuelan, Uzcategui this Saturday.

Incidentally, Connor McGregor, having never boxed professionally, is currently 7/1 to beat the best fighter of this generation in Mayweather. The MMA fighter said he’d signed up for the fight earlier this week, though Mayweather is yet to commit. The American has been doing plenty of talking on behalf of protege Davis this week – but could we see him back in action against McGregor sooner, rather than later? With 49 fights and 49 wins, perhaps it’s no surprise that Floyd is a 1/17 shot to best the Irishman…

Liam Walsh fights Gervonta Davis on Saturday night – see the latest odds here. And for a wide range of boxing markets, check out 32Red Sport here. If you’re up for a flutter on table games or the slots, be sure to check out our award-winning casino too!