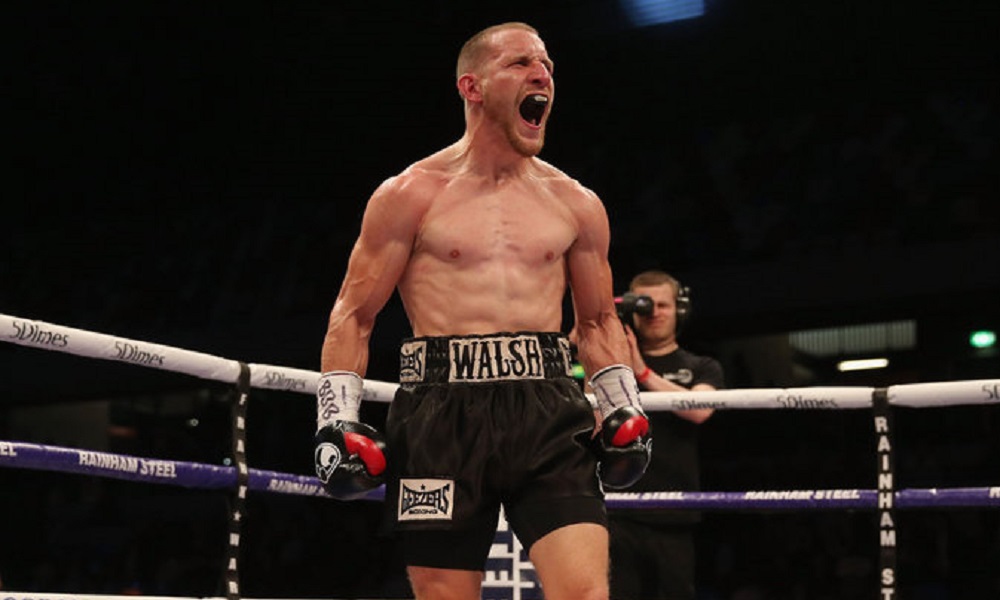 Usually, attempting to piece together an interview during a European semi-final would be a fruitless task but listening to Ryan Walsh “ooh” and “aaah” his way through Manchester United’s first leg victory over Celta Vigo gives a far more revealing insight into the mind of the British featherweight champion then the questions I had scribbled down on a piece of paper ever would.

“I’ve been a Red since the days of Peter Schmeichel and Eric Cantona,” Walsh told 32Red. “Cantona had a huge influence on me. I read his book and he’s influenced a lot of choices in my life. I’m probably a fan of characters like Schmeichel and Cantona more than I am of the club.

“Zlatan Ibrahimovic is the closest person I’ve seen to Cantona since Eric left. I read his book too and he has had that same confidence and cockiness since he was young. He’s never changed. He’s always been true to himself. I like that. The best examples I can give in boxing are Ricky Hatton and Ricky Burns. I met them before they were champions and afterwards and they didn’t change one bit. I think that’s a testament to somebody’s character.

“Cantona was more than a footballer. I like boxers like that too. People who are a bit different and can go beyond the sport.”

For years, Walsh (21-2-1, 10 KO’s) was an under-appreciated figure on the British featherweight scene. Cantona may have described him as a ‘water carrier’. A British title defeat to Lee Selby saw the man from Cromer cast into the wilderness but eventually opportunities began to arrive and Walsh has had the strength of character to grasp them.

A disputed split decision defeat to Dennis Ceylon in a European title bid last October was a good indicator of the level the 30-year-old Walsh is currently operating at and a victory over Belfast’s Marco McCullough (17-3, 10 KO’s) this Saturday evening will secure him a Lonsdale Belt to keep. See the latest odds here.

“There are a lot of good champions who haven’t won the British title and kept it,” Walsh said. “Naseem Hamed went straight to European and world title level but he didn’t win it. Look at Ricky Burns and Anthony Crolla. Both world champions but they didn’t keep the belt. I think the British route is one of the hardest to take.

“In my first British title fight I fought a Welshman [Selby] and lost. In my second I fought an Englishman in Samir Mouneimne and won. In my third I fought a Scottish lad [Darren Traynor] and now I’ve had two Irish guys in James Tennyson and Marco McCullough. I’ll be a true British champion in my opinion.

“I think Marco will try to use his range and box. I do think our styles will gel though. I’m not just going to let him take this title off me. He’s gonna have to work hard to beat me and I’m far more experienced at this level.

“Having lost that European title shot I feel like I’ve got that monkey on my back again. I need to prove that I’m better than this level. I think having that fight in Denmark will pay dividends. My job was to take that fight out of the judge’s hands. I didn’t do that and I’m not satisfied. I’ve got to vindicate everything that I’ve learned from that fight. I feel I’m a much better fighter than I was then and I’m looking forward to proving it.”

Walsh’s twin brother, Liam, headlines this weekend’s bill when he challenges the talented Gervonta Davis for the IBF super featherweight title. Whilst football is the ultimate team sport, boxing is normally a one-man pursuit. A trainer may spend endless hours drilling tactics and game plans into their fighter but the mental and physical battles are fought alone. Walsh and his two brothers – Liam and Michael – are inseparable. They live together, train together, win together and lose together. A victory for one is a victory for the entire family.

“I’m so grateful that I have a successful brother. Without that, I might never have come back. His success was driving me. He gave me loads of hope and kept me going. Even though I wasn’t in the limelight, I was always chief sparring partner and working alongside my brother.

“When Liam wins the world championship, we all become world champion. I can only go off what I’ve felt in the past and when he won the British title it was the best feeling I’ve ever had in my life. I’ve got five children and that’s different but the best single moment in my life was when Liam won that title. I shared the occasion with him and it was really special. It’s gonna be a great feeling on Saturday I’m going to do my job first so we’ll already be on top. We’ll have the British title for the family. From there we’ll go on to the world title.

“I’ve given everything to this sport. I know 30 sounds quite old for a lighter weight fighter but I’m a very slow developer and I think I’ll get a few more years than normal.

“You can spend money and get it back but when I win this British title that’s forever. It’s history. I never went into this sport for money and if I can be a skint world champion I’ll be a happy man. That’s something that my family can be proud of.”

Ryan fights on Saturday night – see the latest odds here. And for a wide range of boxing markets, check out 32Red Sport here. If you’re up for a flutter on table games or the slots, be sure to check out our award-winning casino too!