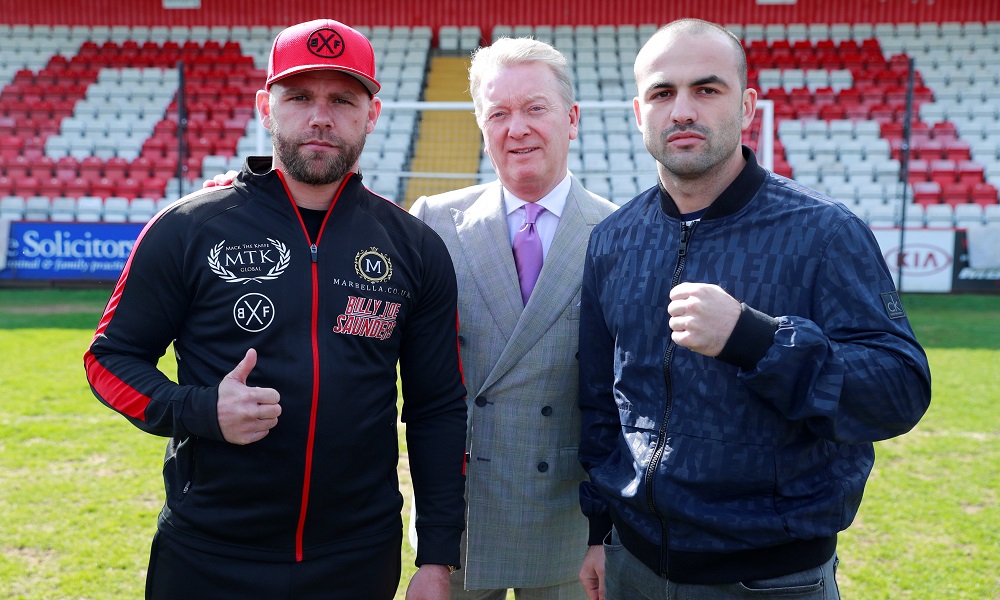 Over the past 30 years, the super middleweight division has been a happy hunting ground for British boxers and the baton has passed through some legendary hands since Chris Eubank won the WBO belt back in 1990.

Frank Warren has a long history of guiding fighters to success at 168lbs and is confident that Billy Joe Saunders can become the latest to succeed when he takes on Shefat Isufi for the WBO title on BT Sport this weekend. For all the latest fight odds, visit our sportsbook.

“Billy’s following that tradition of Nigel Benn, Chris Eubank, and Joe Calzaghe in going up a division too. Let’s get it right, he had a few problems last year. Some were self-inflicted and one was outrageous,” Warren told 32Red.

“It was a terrible thing that happened with the drug test and the Massachusetts Athletic Commission [Saunders failed a test after using a nasal inhaler which contained a prohibited substance ahead of his fight with Demetrius Andrade]. They got that so wrong. If he’d done anything wrong then the British Boxing Board of Control would have banned him and that didn’t happen.

“He’s back on track and he’s focused. This fight is for the full WBO super middleweight title. He isn’t taking Shefat Isufi for granted and if he comes through this then he’s right in the mix for big fights.”

Saunders built a solid body of work at middleweight with his victories over David Lemieux and Andy Lee the high points – but he never managed to snare one of the sport’s superstars. Time and again, Saunders’ name was linked with the likes of Gennady Golovkin and ‘Canelo’ Alvarez but promising discussions would simply peter out. Whilst Saunders was struggling to hold things together over the past twelve months, the world scene altered drastically.

‘Canelo’ proved himself to be the best 160lb fighter on the planet and made a quick foray into to the super middleweight division to beat Rocky Fielding whilst Golovkin has also flirted with the idea of moving up into a division that James DeGale and George Groves have left behind and which is now ruled by Callum Smith. To keep himself relevant, Saunders needs to reintroduce himself to boxing fans.

“Moving up in weight keeps him in the mix,” Warren said. “He can still make middleweight if he has to for the right fight. This is about getting him back in the mix. He hasn’t even peaked yet. He’s still in his twenties and he hasn’t been in any fights that he’s been troubled in yet as a pro. He’s done it the hard way and gone through all the smaller titles to get here. He’s a good fighter but his big problem has been maintaining his discipline. I don’t just mean some of the stupid things he’s got himself involved in outside the ring, I mean his discipline regarding his weight and so forth.

“People can’t keep avoiding him and, let’s get it right, he has been avoided. We’ve had contracts sent to us, we’ve agreed terms and sent them back signed to Golovkin on two occasions. Neither time did they return the contracts.

“Billy proved a point when we took him over to Canada so that his fight with David Lemieux would be on HBO and he did an absolute job on him. For me, that scared people off. Certainly ‘Canelo’. Where are these guys gonna go? Sooner or later they’re gonna have to step up to the plate. Provided Billy comes through this fight, if anybody wants to unify the super middleweight division then they’re gonna have to go through Billy.”

It would be a travesty if a fighter as talented as Saunders faded away without ever being faced with the kind of challenge which drags the best out of him. The realisation that although he is still only 29 years old his window of opportunity could quickly slam shut seems to have set in and it is also a threat that Warren has impressed on Saunders.

“I think it’s a culmination of things. I’ve told him that what’s been going on is unacceptable,” said Warren.

“When he has time on his hands outside the ring and he starts messing around and acting the fool, well, some of that hasn’t been to his benefit. I think he now understands that he’s had enough opportunities and if he doesn’t seize the chance now he’d be a fool to himself and he’d be wasting the God given talent that he has.”

Although Saunders never quite sank to the levels that Tyson Fury did before his remarkable comeback, there are parallels to be drawn between the two great friends. Maybe the most important one could prove to be Saunders’ decision to reinstate Ben Davison as his trainer.

Davison worked in Saunders’ corner when he was at his lowest ebb and successfully guided him through a world title defence against Artur Akavov. With his career entering a crucial stage, Saunders has entrusted his future to the man who brought Fury back from the brink. It is a choice which Warren wholeheartedly agrees with.

“It was unfair on Ben, he had to jump in at the last minute [for the Akavov fight]. Bill’s weight was all over the place. He managed to defend his title otherwise he’d have been stripped. Ben got a lot of flack for that but he helped him keep his title. Those days are gone and Bill is one of those fighters who has to have a date and an opponent in his sights. If he has those two things, he knuckles down and trains really, really hard. If he’s just ticking over, he finds that difficult. I’m hoping that lesson has been learnt.

“Ben has also grown up. After taking flack he didn’t deserve that night, he got into Tyson Fury’s head and worked hard on him to keep him in shape and hopefully Billy has learned from Tyson what he can achieve if he dedicates himself 100%.”