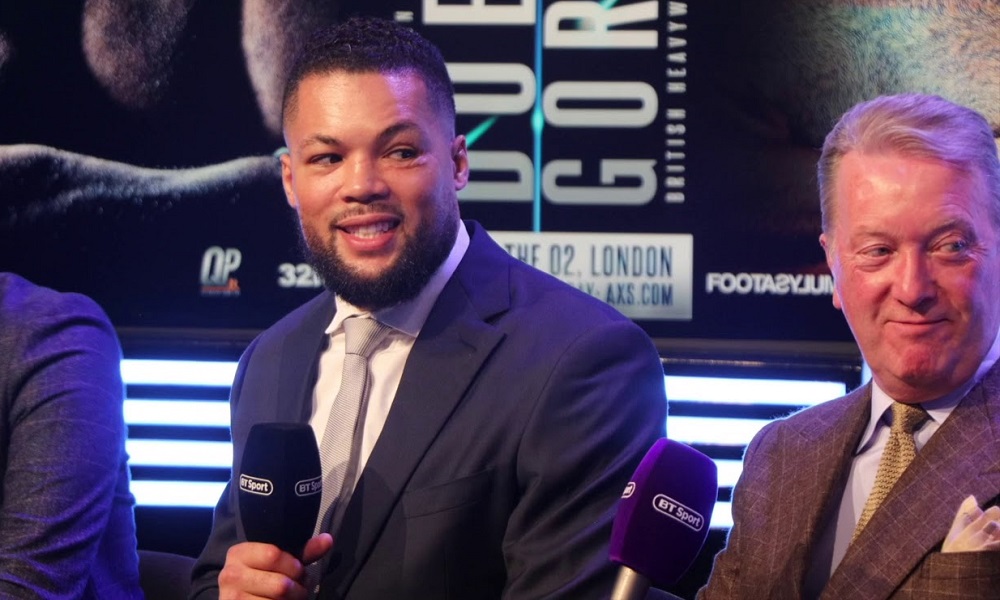 A fighter can spend weeks and weeks thinking up a suitable nickname but sometimes the nickname finds the fighter.‘The Juggernaut’ suits Joe Joyce’s relentless style to a tee but it also perfectly describes the way the Londoner is attempting to gatecrash the world heavyweight scene.

Joyce (8-0, 8 KO’s) takes on the Russian giant, Alexander Ustinov (34-3, 25 KO’s) live on BT Sport this weekend and Frank Warren sees the fight as another invaluable step on Joyce’s rise through the heavyweight ranks.  For all the latest fight odds, visit our sportsbook.

“What everybody has to realise with Joe is that he’s in his thirties but he’s also in a situation where he’s only had eight fights as a pro,” Warren told 32Red. “People think he has great amateur experience but there are all sorts of other things to think about like, ‘How will he do the twelve rounds?’ He needs stepping up each time and he has fought decent guys so far. He’s gonna have to make a point and we want him to make a point. Get through it and he’ll be on the big show on July 13th.

“Ustinov’s a big old lump but it’s not that he’s without talent, look what he’s done.”

Joyce’s decision to sign a promotional deal with Warren has thrust him directly into an exciting British heavyweight mix. Inevitably, the 33 year old was immediately linked with 32Red ambassador Daniel Dubois and Nathan Gorman but the Olympic silver medalist has taken calculated gambles since the start of his career and sees himself a step ahead of his new rivals.

“He does and – in terms of amateur experience – he is. He has a vast amount of top level experience and some of the guys he fought as an amateur would be as good as some of the professional opponents that these youngsters have had,” Warren said. “When Joe’s team decided that they wanted to focus on a slightly higher level and the European title or maybe Manuel Charr and his WBA bauble, I understand where they come from.”

Should Joyce get past Ustinov, he will face a world ranked opponent on the July 13th bill which will also feature the eagerly anticipated British heavyweight title clash between Dubois and Gorman. The announcement of that fight grabbed the interest of boxing fans around the country and the winner will become a natural opponent for Joyce at some point in the not too distant future.

“It becomes a massive fight. It’d be a fight that the public would want to see,” Warren said.

“Remember, a few years ago I did James DeGale and George Groves and people said I was mad for putting them together so early in their careers? It didn’t hurt either of them. They both went on to win world titles. It’s not the end of the road for the loser. Look at Derek Chisora. He keeps getting offers. In fact, we offered Chisora the chance [to fight Joyce] but he didn’t wanna know.”

With Tyson Fury, Anthony Joshua, and Deontay Wilder all ploughing their own furrows in the pursuit of the undisputed heavyweight title, the UK scene is clear for the next generation to stamp their mark of a lively heavyweight division. With Dubois, Gorman, and Joyce all competing under the same banner, Warren and BT Sport are in prime position to establish the next group of contenders.

“Big time. All the fighters offer something different and there is something for everybody. These are the young bucks. While the other guys are off in America doing their thing, this is the chance for these fellas to fight at primetime and get the exposure they need on a channel that’s flying at the moment.”

A little further down the undercard, young featherweight Ryan Garner will make the latest appearance of a short, exciting, but turbulent career. From sparring partners like 32Red ambassador Josh Warrington and Carl Frampton to the opponents who have been unfortunate enough to face him, Garner earns rave reviews from almost every man he shares the ring with but a series of stupid incidents outside the ring have slowed his progress. ‘The Piranha’ has the potential to become a star of British boxing but he needs to add some consistency and commitment to his undoubted ability.

“Ryan’s a good little fighter. You sit down and talk to them when they get into little bits of trouble and help them out where you can but basically you can get by on talent to a certain extent,” Warren said. “After that it’s down to the hard work and graft. If you don’t put that in, you aren’t going to do it.

“When I first saw him, I thought he could be a new Naseem Hamed. He’s got a variety of shots and a fearless approach. He takes the fight to the opponent and he’s just got that certain something about him but I’ve told Ryan this, the couple of problems he’s had have just made me hold back on my final thoughts about his future until I see some real commitment.”