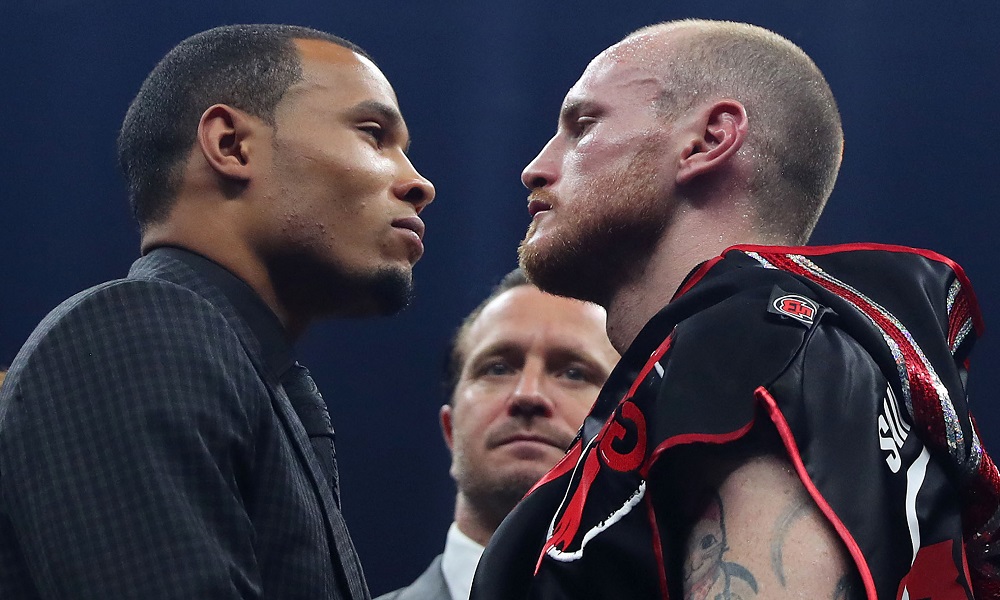 Nothing beats an all-British dust-up. And no all-British dust-up, beats an All-British, super-middleweight dust-up. America may have Andre Ward, James Toney and Roy Jones Jr – arguably the best to do it at 168 pounds – but it’s the Brits who’ve made the weight their home, made plenty of money and were involved in the moments, for better or worse, that we all remember most.

Nigel Benn, Michael Watson, Chris Eubank, Joe Calzaghe and Carl Froch all became household names over the last 30 years with their exploits at 12-stone and with the exception of Calzaghe, it was in all-British encounters they stepped up to the plate and defined their careers.

This Saturday at Manchester’s MEN Arena, two of boxing’s more (politely put) divisive characters, George Groves and Chris Eubank Jr., get their chance to add their name to that list. You can bet on the fight here. Both have experienced the big domestic bouts before. Both came up short. But rather than diminish the event, that only seems to have added an extra layer of intrigue. In more ways than one, the semi-final of the, so far excellent, World Boxing Super Series has a real knock-out feel to it.

Chris Eubank Jr. is currently 11/20 favourite to come out victorious on Saturday, but as with all boxing events that manage to cross-over into the mainstream, there’s more than a small amount of that price being driven by a promotional narrative, than fact.

Eubank Jr. could quite conceivably steam-roller Groves – a man who’s shown more than once that he can look ragged under pressure – and if you’re of that opinion, the 7/4 on offer for a Eubank stoppage is an easy bet to rationalise given his ability to put together flashy combinations and get his opponent rattled. The problem for me however, is that nearly every other outcome for the bout is easy to rationalize – that’s what makes it such a good fight – but if you work through what we know and what we’ve seen in both careers up to this point, those that lead to Groves having his hand raised are the more likely. Unless you’re happy to put your hard-earned on potential and likely improvement, the 7/5 available on the Groves win is attractive.

We’ll start with the undisputable fact. George Groves is the bigger man. He’s bigger than nearly all super-middles and he’s certainly bigger than a man like Eubank who could comfortably still make 160-pounds if the right opportunity and the right money came about. There’s an old-adage in boxing that a good big’un always beats a good little’un and for me that’s a reassuring tick in the box. Eubank has developed a name for being able to bully and over-power his opponents, but you can’t ignore that much of this reputation is based on work done against smaller men or through some nicely edited Instagram videos.

Secondly, Groves has consistently operated at and has beaten, a better calibre of fighter. If you put all the career wins of both fighters together, only (a well past-it) Arthur Abraham would make the top five combined victories. Groves has beaten James DeGale, Christopher Rebrasse, Glen Johnson, Jamie Cox and the better Chudinov brother. Even though Paul Smith, by his own admission, isn’t the better Smith brother at super-middleweight, he’d be in with a very good shout of being the second-best name on Eubank Junior’s resume and Groves dealt with him early. Only the elite, in Carl Froch and Badou Jack have bettered him, and we don’t need to remind anyone that two of those losses come with some caveats.

Eubank Junior, for all his flashes of excellence against inferior opposition, has stepped up against a prime, top-calibre opponent once and was for large periods of that bout out-boxed by Billy Joe Saunders – not that there’s any shame in that. Of the two, he probably has the greater scope for improvement, but it’s not unfair to say we’re yet to see it at this level.

Third on my list of ticks against The Saint’s name is, he’s the better boxer of the pair. When he’s in the groove and gets it firing, Groves’ jab is a thing of beauty. To win this weekend, Eubank will need to back Groves up and let his fast shots go, but for the early rounds at least, he’ll have to contend with a piston-like jab coming at him, often thrown in doubles or trebles. The jab alone is enough to make any fighter think twice about letting their hands go.

He also retains enough of the signature ‘counter-shot’ style he learned under Adam Booth to keep his opponents wary. Just ask his last opponent Jamie Cox, who’s probably still feeling the body shot Groves stopped him with when he wakes up every morning. I wouldn’t argue for a minute that Eubank is the better ‘fighter’ if the bout goes that way, but based on pure technical ability, George is the pick of the pair.

At the risk of sounding like I need to convince myself, next on the list is power. Both men have similar stoppage records, but dig a little deeper and we’re not comparing apples with apples. Groves has done all his damage at this weight, not the one below. Martin Murray – a man who’s shared the ring for eleven hard rounds with the fearsome Gennady Golovkin – says George Groves is the single hardest puncher he’s faced (Groves by KO, TKO or DQ is 5/2). Even the teak-tough Carl Froch had to pick himself up from the canvas to get the win against Groves when they met in their first bout. Eubank may have claimed a highlight-reel stoppage victory of his own in the first round of this tournament against Avni Yildrim and feel he can dig a bit too, but if he trades like that with the more accurate Groves on Saturday, I’d argue he’s playing a high stakes game at low odds. Eubank may have inherited his dad’s granite chin, but I don’t think he’s stupid enough to think he can rely on that alone. A degree of additional cautiousness this weekend will likely be crucial, as it’s going to blunt his own offensive skills.

So, with so much in Groves’ favour, why is Eubank a close, but clear favourite? Well, largely because of Groves’ reputation for gassing late in fights. Throwing every jab and right-hand with power and continuously jerking movements to upset his opponent’s rhythm come with the price of burning through energy. Eubank, if nothing else, is super-fit and there is a very real possibility he gets a roll-on during the second half of the fight. Possibly even enough to claim a stoppage between rounds 7-12 (currently priced at 7/2).

I suspect though, that if James DeGale and Badou Jack didn’t have enough to shift Groves in the later rounds when they were gaining a foot-hold, then Eubank will also fail do so. George Groves should carry a comfortable lead into the second half of the bout and if he does, I’d then be backing him to just about hold-on for the victory. The 4/1 on offer for Groves to win on points is my bet of the weekend, but I’m fully anticipating a few hairy moments along the way. Domestic showdowns at 168-pounds rarely disappoint and win or lose, fingers crossed we’ll see the same this weekend.

The fight takes place on Saturday night – to see our latest boxing markets, check out 32Red Sport here. If you’re up for a flutter on table games or the slots, be sure to check out our award-winning casino too!

Bradley Skeete interview: I need to be aiming for the world
Daniel Dubois exclusive: Dynamite on his latest challenge