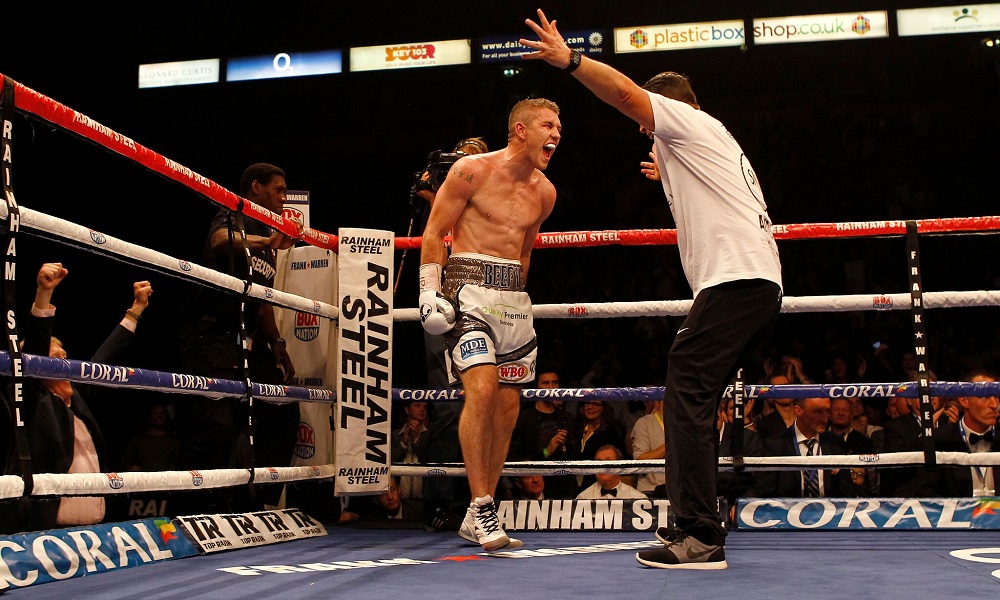 Liam Smith exclusive: The walls will come in on him

Only a tiny percentage of professional boxers will end their career with a piece of silverware to show for their efforts. The number of fighters skilled enough to claim world honours is smaller still. Only a very select group get the opportunity to take on one of the sport’s biggest names on an American pay-per-view card.

This Saturday evening at the Manchester Arena, former WBO super welterweight champion Liam Smith (24-1-1, 13 KO’s) will contest the interim version of his old title (for the latest odds, see here)  with domestic counterpart and British titleholder Liam Williams (16-0-1, 11 KO’s). Despite his status as a former world title holder and the fact that he shared a ring with the brilliant ‘Canelo’ Alvarez just six months ago, the fight has boxing insiders and fans split. For every person who feels Smith will be too seasoned for the unbeaten but relatively untested Williams, there is somebody who feels that he will struggle to keep up with the Welshman’s quick fisted explosive attacks.

For the first time in a long time, Smith goes into a fight with a domestic rival with people questioning his credentials. The confident 28 year old is certain that he has all the answers.

“It’s a big fight but it’s [just] another fight for me. I’ve been here before. I’ve been on bigger stages than this before and I’m massively confident going in,” Smith told 32Red. “I know that as long as I’ve done everything right, I’ll win this fight.

“I’ve seen his team saying that I won’t be the same after the ‘Canelo’ loss. That’s just them trying to put doubts in my head. I’m 28 years of age and you haven’t seen the best of me yet. I think Gary Lockett [Williams’ trainer] is trying to make me doubt myself by saying that. If he thinks that that was me at my best, well,“ Smith’s voice trails off. “He knows the problems I had in that training camp. Liam Williams only got to spar Kell Brook because I got cut. A former fighter like Gary Lockett knows that and that’s how I know he’s only trying to work my head.”

The fight will provide Smith with his first real test since he surrendered his world title and unbeaten record to the Mexican superstar in Dallas last September. Smith acquitted himself well in Texas before succumbing to a ninth round defeat but that is of little consolation to the Liverpudlian. A recent busman’s holiday to Barcelona served a dual purpose. It not only yielded a four round victory over one Marian Cazacu, fulfilling a WBO requirement and qualifying Smith to fight for the interim title, it also allowed him to cast away any mental demons the defeat to ‘Canelo’ may have instilled.

“I did feel better afterwards. I got back out under the lights and let a few power shots go. Any fighter will tell you that. Regardless of who the opponent was, it was good to have a little break. We went over to Barcelona for a couple of days. It was only a very small show, I’m not making it out to be something it isn’t. That fight didn’t alter my rankings at all. That fight was just to get a win on my record so that I could fight for this interim title. That’s all it was. I was ranked number four before the fight and I was number four afterwards.

“Believe me, I’ve made up for lost time sparring in this camp. I’ve done a lot of sparring.”

Speak to anybody who has shared the ring with Smith – either in sparring or professionally – and they will invariably mention the way he is able to manipulate them and force them into positions they would rather not be in. So far in his career, Williams has been the one dictating tempo and range. Despite Lockett’s claims that Williams has more natural talent than Smith, it seems probable that at some point on Saturday, he will be forced to fight Smith’s fight. Unsurprisingly ‘Beefy’ is keener than anybody to to find out how he will cope.

“We will see. It’ll be very competitive early. He’ll be strong, he’ll be game and he’ll be on the ball. They think I’m expecting him to tire and get him down the stretch. I’m not banking on him tiring, he’s a fit kid. There’s a difference between tiring physically and a tiring mentally. How will he cope with it? How will he cope with it when I’m pushing him into corners he doesn’t want to go and making him do things he doesn’t want to. The walls will come in on him.

“I think Liam’s machoness and ego and his willingness to fight me will be his downfall. I’ve seen a few people saying that he’s got better variety than me and I think that’s the most deluded thing I’ve ever seen. There’s arguments for other things. There’s an argument that he might be a bigger puncher or have more one punch power but variety wise, I just don’t see where that comes from. He’s got a good jab and a good right hand and that’s it.

“For the last two or three years I’ve gone about my business and walked through people because I’ve never been stopped from doing it. I got stopped doing it by ‘Canelo’ and I lost the fight.

“I’m a senior ABA champion,” Smith concluded. “Do they think I did that by walking through people? Go and get any video of me as an amateur. I can box. I boxed for England numerous times. If I have to box, I’ll box. Put it this way, I think that after some of the things he’s said, Gary Lockett will be surprised after this fight.”

32Red Sponsors Frank Warren’s Shows
Liam Williams: Smith is definitely underestimating me and what I can do