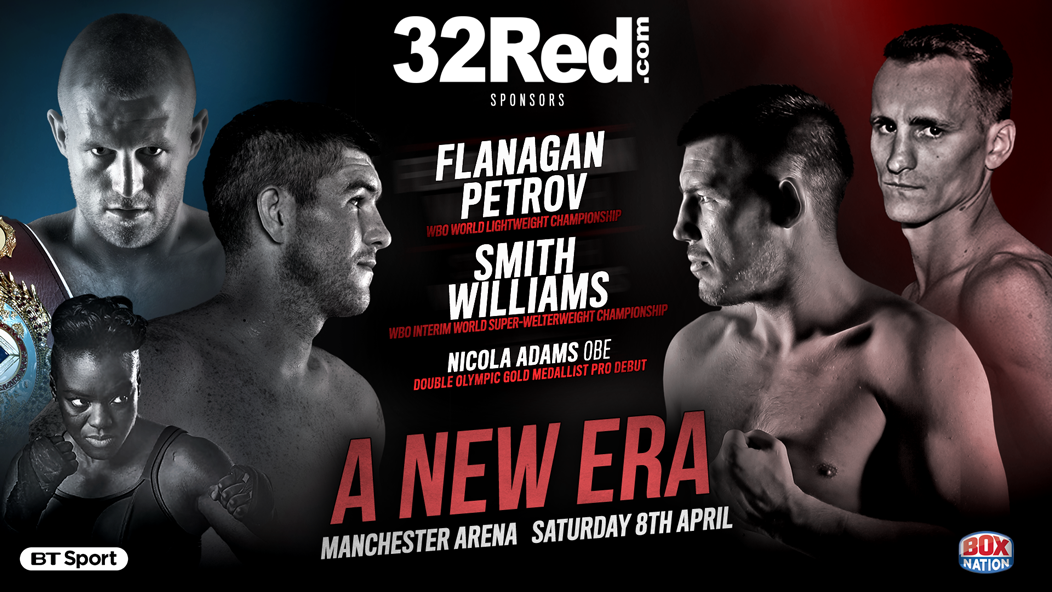 The multi-event agreement, which will kick-off with the stacked April 8th show from the Manchester Arena, will feature some of Britain’s best talent involved in world title action as well as the prospect of seeing the emergence of our next generation of superstars.

The Manchester show will be headlined by current WBO World Lightweight Champion Terry Flanagan defending his crown against Russia’s Petr Petrov, but will also have pulses racing due to the mouth-watering clash between Liam Williams and Liam Smith for the Interim WBO World Super-Welterweight Title. Also on the bill is the eagerly anticipated debut of double Olympic Gold-Medallist Nicola Adams as she begins her quest for more honours in the pro ranks.

Following hot on the heels of the Manchester event will be more World Title action in the form of Tommy Langford vs. Avtandil Khurtsidze for the Interim World Middleweight Championship at the Leicester Arena on April 22nd and Gervonta Davis vs. Liam Walsh for the IBF Super-Featherweight World Title at London’s Copper Box on May 20th. 32Red Ambassador Josh Warrington will also be in action at the First Direct Arena in Leeds on May 13th when he continues his march towards a world title when facing the vastly experienced Spaniard, Kiko Martinez.

Gerry Murray, Director of Brand & Acquisition, 32Red PLC, commented: “32Red are thrilled to be part of the start of an exciting new chapter in British Boxing. Frank Warren and BoxNation have a great history of putting together excellent live events and with the additional involvement of BT Sport, this was too good an opportunity for us to miss out on. Boxing is a core part of our brand strategy and the opportunity to align with current and future British World Champions, challenging themselves in competitive match-ups is an exciting prospect.”

Frank Warren, Chairman of BoxNation, said: “I’m delighted to have 32Red sponsoring our shows. They have done some eye-catching sponsorship partnerships alongside Leeds United, Glasgow Rangers and our own Leeds Warrior Josh Warrington, amongst others. They will be across four fantastic events which also marks the beginning of our exciting new deal with BT Sport.”

Boxing Preview: Haye v Bellew
Liam Smith exclusive: The walls will come in on him