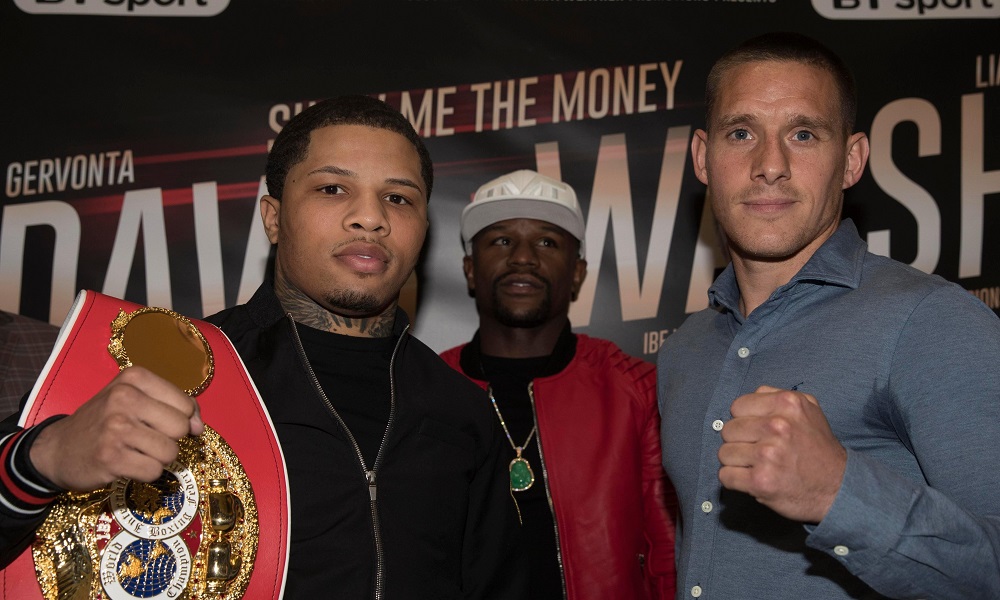 On Saturday night, the lights will dim, the rap music will hit and a smiling Gervonta Davis will enter the Copper Box Arena. With Floyd Mayweather Jnr by his side, the pair will saunter to the ring amid an air of of glitz and glamour. Waiting in the ring for the flashy IBF super featherweight champion from Baltimore will be Liam Walsh from Cromer. See the latest odds here.

Those tuning in to the fight on BT Sport would be forgiven for instantly assigning roles to the two combatants. Davis, the super-talented, brash young American superstar in waiting and Walsh, the gritty, plucky Brit. Davis lives up to that billing but former British and Commonwealth champion Walsh (21-0, 14 KO’s) will be able to call on far more than the good old British standards of determination and fitness when the first bell rings.

“Give me the American mentality any day. First is everywhere and second is nowhere,” Walsh told 32Red. “That’s how I was brought up. I have fond memories of my dad. If we came home from school sports day and we’d finished second then he didn’t want to know. I’m doing that with my kids now. People might think that’s harsh but it isn’t. Life is about winning and you want to breed winners. There will be no medals won for running him close. The only way to win here is to beat him. There’s no other result.

“There’s no added pressure that other people have put on me, it’s only the usual pressure that I put on myself to do well. It doesn’t feel much different. It’s the same old really.”

Davis’ talent is unquestionable but he remains something of an enigma. The champion spends as much time talking about money and luxuries as he does his unimaginably tough upbringing in Baltimore. He has adopted the ‘Hard work, dedication’ mantra of his mentor, Mayweather, but seems to blow up in between fights. For all the devastating attacking intent he showed when taking the title from Jose Pedraza in January, there was a moment when the Puerto Rican looked to have gained a foothold in the fight as the young prodigy tired. Davis could be the future of the sport but there are plenty of questions hanging over his head.

“Sometimes he comes across well and you think he’s humble and then he starts saying that he needs to be earning nine or ten figures. I haven’t put my finger on him totally if I’m honest,” Walsh said. “At the end of the day we’re gonna have a punch-up and all that matters is who wins that I suppose. Regarding how he is as a person, he’s bit unknown. It doesn’t help when he goes to speak and Mayweather jumps in and answers all his questions for him.

“At the press conference he had no idea [about me]. Mayweather said that himself. he said, ‘I’ve never watched you but you look like you have a good jab.’ He was obviously looking at my height and reach. Davis has taken this fight without even knowing though. I know he’s getting well paid so it doesn’t matter how good or crap he thinks I am, he was coming over anyway. They would have had a look and I think he’ll up his game too.

“From what I’ve seen, he very rarely uses his front hand. He stabs it to the body and leads off with a hook. I think he’ll improve that. If he doesn’t and I go southpaw with him, then I’ll win the battle of the front hand. That’ll mean he has to start taking more risks himself. He’s been watching the Paul Appleby fight from what I hear but I’m a much better fighter now than I was then. I make a lot smarter decisions. If it’s a close fight, I will have to take risks because I’m not there to make up the numbers and have people say that I put in a good effort. That’s not me. I’m there to win.”

Rumours swirl that Davis and his team have based many of their calculations for this fight on footage of Walsh’s up-and-down war with Appleby and his drama-free dissection of Andrey Klimov. Walsh is a totally different fighter than the one who picked himself up off the canvas to beat Appleby almost six years ago and has even more to his game than the boxer who dissected Klimov last October. Walsh has earned his stripes with avid boxing fans by proving himself against a list of respected names but snatching the IBF super featherweight title from Davis on BT Sport would catapult him to a whole different level.

“Unfortunately, it will,”  he laughs. “Anybody who knows me would agree, I’m not up for media stuff whatsoever. It’s nice to be recognised but basically I’m not media-friendly when it comes to cameras and all that stuff. It’s just not me. My brother, Ryan, keeps telling me that I better start preparing myself because once I win it’s gonna go off the chain.

“I’m more than happy for Gervonta to watch the Appleby fight and think that that’s what I’m all about. Surely they’re more professional than that? You’d think that they’d watch my recent fights and watch me against southpaws and a few different styles but if they’re just watching me against Andrey Klimov and Appleby then that’s great for me.

“We don’t know how he’s going to approach it do we? I’m crossing my fingers that he comes out and tries laying it on me. That’s perfect for me. He’s said he’s gonna take me out in six rounds so I’m hoping he does that. Not only does that leave him open to be taken out but it plays into my hands.”

Liam fights on Saturday night – see the latest odds here. And for a wide range of boxing markets, check out 32Red Sport here. If you’re up for a flutter on table games or the slots, be sure to check out our award-winning casino too!