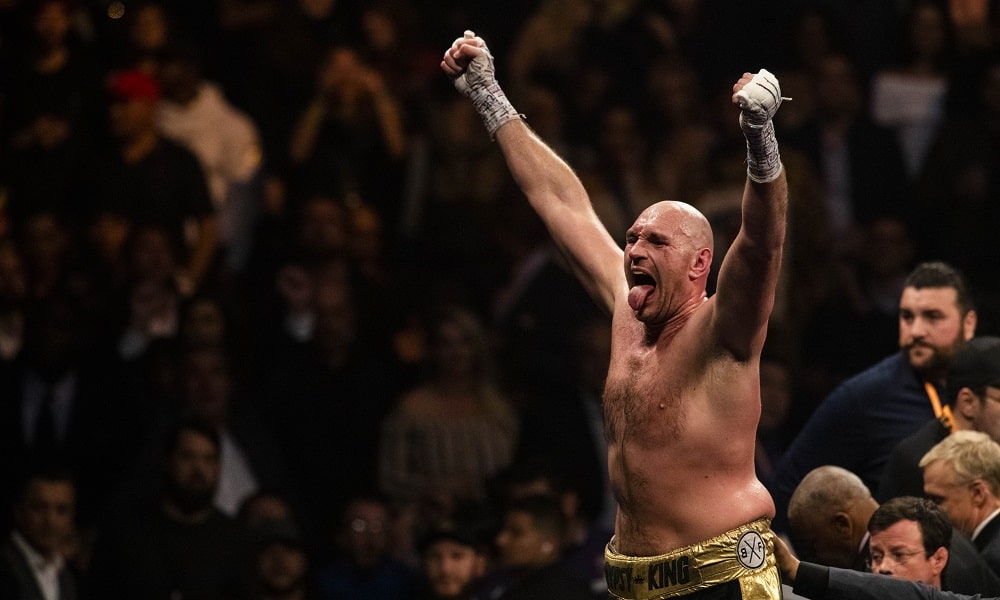 With just days until Tyson Fury takes on Dillian Whyte in a blockbuster bout at Wembley Stadium, it’s the perfect time to revisit some of the Gypsy King’s greatest fights. Fury vs Whyte is sponsored by 32Red – for the latest fight odds, visit our sportsbook.

With his hulking frame and unconventional physique, Fury looks like a throwback to another era.

The 6 ft 9 in fighter is well known for his outlandish antics. But if Fury is a consummate showman, he also delivers spectacular performances in the ring too. Here are five of Fury’s most memorable encounters.

This was the second time Fury had fought fellow British boxer Chisora. In their first meeting at London’s Wembley Arena in 2011, Fury had won by unanimous decision.

Three years later the rivals would clash again, this time fighting for the British and European heavyweight championship. Intriguingly, Fury switched from his usual orthodox stance to fight southpaw against Chisora. And if that change was intended to flummox his opponent, consider it mission accomplished.

Fury was in control for the entire fight, often showboating before the referee told him to cut it out. Chisora lasted until the 10th round, when his corner elected to end a decidedly one-sided affair. Not a fight for the ages perhaps – but a resounding win, and certainly an important stepping-stone in Fury’s path to greatness.

Before this fight, Fury used a variety of mindgames to throw the meticulous Klitschko off balance. Fury’s team threatened to cancel on the day of the fight, complaining the canvas floor of the ring was “too soft”. Then, half an hour before the ring walks were due to begin, the Manchester-born boxer demanded his opponent rewrap his hands. Even before that, Fury had turned up to a press conference in a Batman costume – perhaps irking his somewhat straitlaced opponent.

A man known for his need to be in control of a situation, did these actions disrupt Wladimir Klitschko’s mindset? Perhaps so. Adept at winning without wowing, Klitschko went into this encounter undefeated in his last 22 fights. A Ukrainian by birth, the 39-year-old nonetheless had a loyal following in Germany, so the Dusseldorf venue certainly seemed like home territory for Klitschko.

The fight itself was another occasion where the outcome was more notable than the actual performance. Neither man put on a masterful display. Klitschko threw only 69 punches through the entire fight, landing 52; Fury threw 202 punches, landing 86. But in a scrappy contest, Fury was nonetheless the more convincing – even after having a point deducted for hitting his opponent on the back of the head. Afterwards, Fury was gracious in victory, thanking Klitschko for being a “great champion” – before celebrating by launching into a heartfelt rendition of an Aerosmith song.

Deontay Wilder is not a man to trifle with. The 6ft 7in fighter from Alabama once decked a man dressed as an oversized burrito. Even if you’re not a fan of Mexican cuisine, that seems like overkill.

Whatever, this devastatingly powerful puncher is clearly a mean hombre. And there were real questions about Fury as he faced Wilder, having struggled with serious mental health and drug issues following his triumphant night in Dusseldorf three years earlier.

The clash at Los Angeles’ Staples Centre would eventually end in deadlock, a 12 round split decision draw seeing the American retain his WBC heavyweight belt. Fury performed impressively, and was the better fighter for much of the encounter. But Wilder would drop his opponent twice, in the ninth and 12th rounds.

Still, both men were reasonably happy by the end – with Wilder telling viewers: “it was a great fight, let’s do it again.” Careful what you wish for, D…

Just over a year later, Fury’s second encounter with Wilder took place in Las Vegas. And if some of Fury’s previous high profile fights had been more about the result than the spectacle, this was a sublime showing from the Manchester fighter.

Wilder seemed oddly flat on fight night, Fury knocking the powerful American down in both the third and fifth rounds.

The Alabama fighter would also crash to the floor several more times. They might have been slips, not knockdowns, but the Bronze Bomber looked outclassed. Fury was in command for most of the fight as members of the crowd looked on in visible disbelief.

Wilder’s team would throw in the towel in the seventh round. Fury had won the WBC belt to become world heavyweight champion for the second time in his career. This time, the Englishman would celebrate his triumph by serenading the audience with Don Maclean’s American Pie – not the full version, mercifully.

Fury also said plenty of nice things about the man he had just dethroned. Wilder was similarly gracious initially – though later, he would go on to blame his loss on various improbable factors. These ranged from the theory that Fury was using “loaded gloves”, to the armour costume Wilder wore during his walk-on being so heavy that it sapped his energy. Dude. You got beat.

Fury fought Wilder for a third and final time in 2021. Fans might have been forgiven for fearing this concluding episode in the trilogy would fail to reach the heights of the previous bout, but this was another incredible battle.

“You’re a weak man and you’re getting knocked out,” Fury had told his opponent in the build-up to this fight. But in a tight few opening rounds at Vegas’s T-Mobile Arena, Wilder initially looked to be on top, his big right connecting on several occasions – without landing too cleanly. But in the third round Fury connected well enough to send his opponent to the canvas.

Wilder was back on his feet – but looked out on his feet, clinging on to Fury as to dear life itself as the final seconds of the round ticked away. Wilder still looked vulnerable as the fourth round begun. Yet in the third minute he threatened an incredible turnaround, sending Fury crashing to the floor not once but twice.

The British fighter looked understandably shaken – but he would rally from that low point, chipping away at his opponent. The American would continue to land dangerous punches but Fury was on top, even before sending Wilder down once more in the 10th round.

Though Wilder got back to his feet and the fight continued, you sensed the jig could be up for Wilder. Yet in the closing seconds he fought back to put Fury on the back foot. It was a brave, but ultimately fruitless act of defiance. In the next round, the 11th, Fury would once again send Wilder to the canvas, for the fifth knockdown of the night.