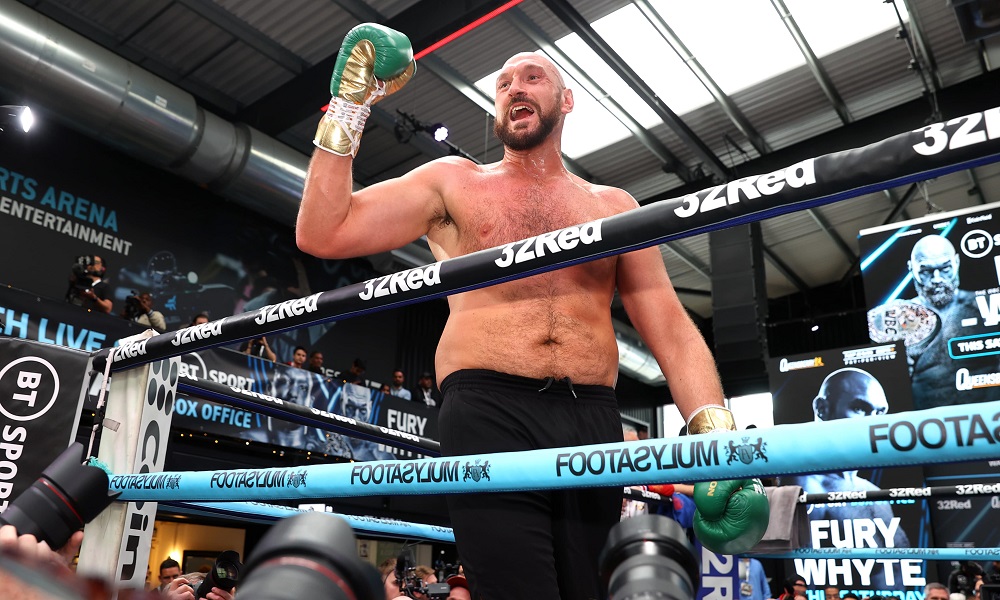 There are few more exciting and meaningful events than a clash for the world heavyweight title but this weekend the stakes will be raised even higher.

How about two explosive and unpredictable characters battling for the title in an open air fight in front of a record crowd at the national stadium? This weekend’s clash between Tyson Fury (32-0-1, 22 KO’s) and Dillian Whyte (28-2, 19 KO’s) truly is unmissable. Fury vs Whyte is sponsored by 32Red – for the latest fight odds, visit our sportsbook. 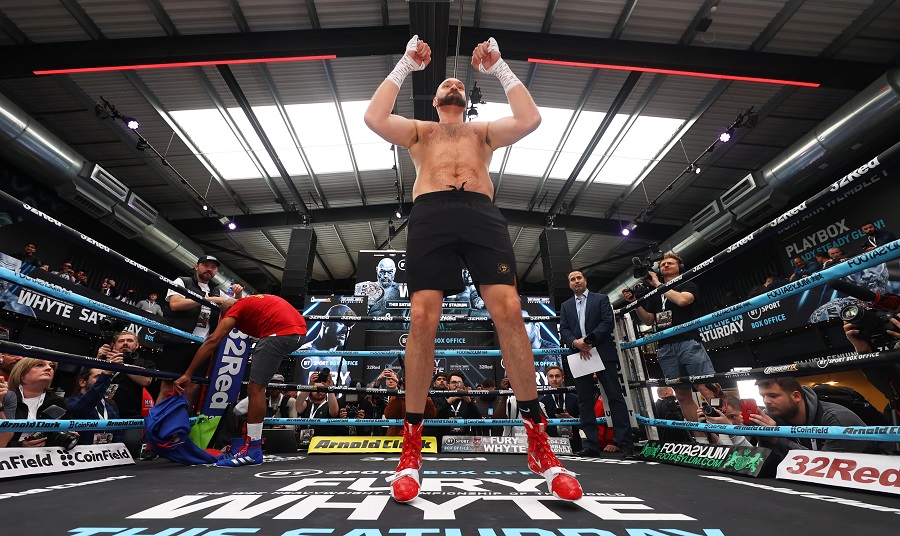 Generally recognised as the best heavyweight on the planet, it is almost four years since the larger than life Fury boxed in Britain. He returns home as one of the sporting world’s most recognisable figures after taking over America with his stunning trilogy of fights with Deontay Wilder. Whyte has ran the gauntlet of heavyweight contenders over the years. There have been ups and downs but he has proven himself to be one of the most dangerous – and exciting – big men on the planet.

Whyte’s refusal to climb aboard the traditional promotional juggernaut might have deprived the promotion of a head to head photograph or an explosive press conference or two. But it has ensured that the fight has stayed in the news for weeks. Anticipation is certain to reach fever pitch as the traditional fight week activities get underway.

There were around 200,000 hopeful fans vying for a seat when tickets for the event went on sale and Wembley’s capacity was eventually opened up to 94,000 for this weekend’s showdown. Both fighters have combustible personalities and a habit of getting involved in exciting wars. Those with tickets are already guaranteed to witness history being made. They might well get to see a fight to remember, too.

Anthony Crolla and Barry Jones are former world champions and expert analysts while 32Red ambassador, Zelfa Barrett, is on the verge of his own title shot. Who better to break down this weekend’s super fight?

32Red: The biggest talking point throughout the whole build up has been Dillian Whyte’s decision to do the bare minimum amount of promotional work and his refusal to engage Tyson Fury in any pre-fight shenanigans. Do you think his decision will make a blind bit of difference to what happens in the ring? 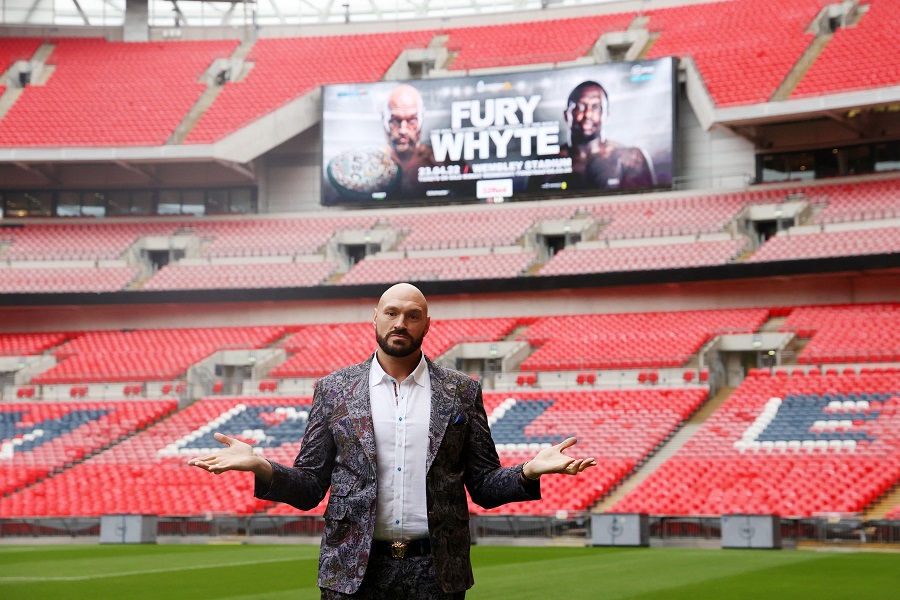 Anthony Crolla: You could argue that he’ll be a little bit fresher and not as tired. It can be pretty draining doing all the pre-fight work. However, I don’t think it’s gonna have done him any favours at all with the support. I do expect Tyson to have the majority of the support anyway but I don’t think this will have helped Whyte. I also think that he’s waited long enough to have this moment so to not do any of that seems a bit odd. Each to their own though.

Zelfa Barrett: Yeah. Boxing’s a mental game and Whyte hasn’t wanted to put up with the way Fury is. He’s the modern day Muhammad Ali isn’t he? It’s probably made him more mentally focused. Going back into the gym the day after having Fury go on at you in a press conference could affect you. But it could also make you wanna beat him even more. I just think that maybe he might feel he’s a bit weak minded to deal with what Fury is saying.

32Red: As well as fighting for the most prestigious title in sport, Fury and Whyte will be watched by the biggest live crowd in British boxing history and millions around the world. As the first bell draws closer and the reality of the situation sets in, do you think the scale of the event will affect either fighter?

“They both seem no-nonsense guys” 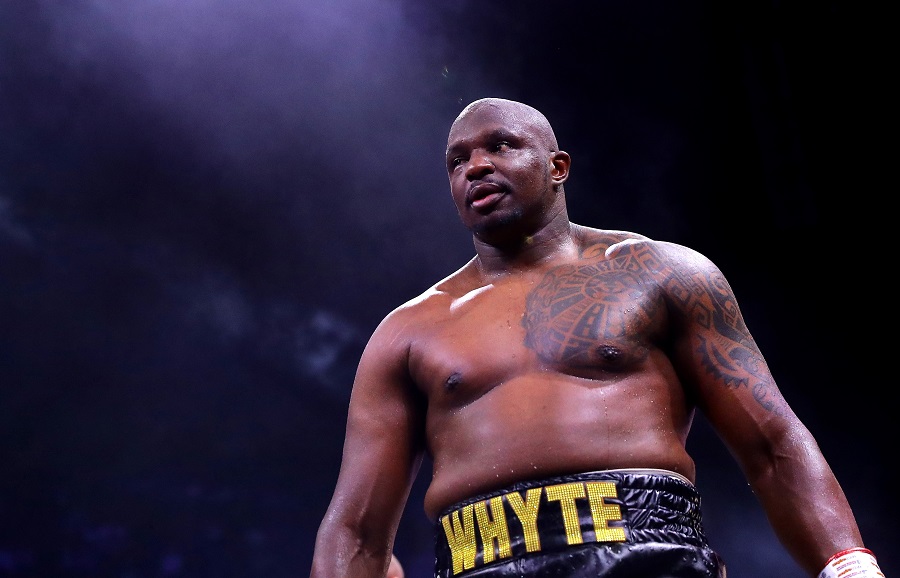 Anthony Crolla: I’m not sure the size of the occasion will affect either of them. They both seem pretty no-nonsense guys when it comes to it. I know Tyson can play the clown and stuff but I think he knows what he’s doing. Certainly, I don’t think it’ll affect Tyson. I don’t think Dillian has that in him either. He hasn’t been involved in anything this big but he’s had big nights himself too.

Barry Jones: I don’t think the occasion will play a part. I think the crowd might. The fact it’s apparently a 94k sell out which would be unique, that might play a part. But I don’t know who that will benefit or work against. You’re sort of thinking Fury will be the crowd favourite but I’m not sure that will be the case. He’s the better fighter but in the UK he hasn’t really had a proper, primetime PPV. His biggest fights have been in Germany and America. If the occasion overawes either of them at this stage of their careers, they probably don’t deserve to be where they are. I don’t think it’ll be a factor at all.

Zelfa Barrett: No, they’re fighting for the heavyweight world title for a reason. They’re apex warriors. I just assume that they’re gonna thrive off this kind of atmosphere. They’ve both been in big main events so it’ll be nothing to them. I’m a showman so I thrive off it and it makes me a better fighter. I’ve just gotta assume they’re the same.

32Red: The big question, who walks out of the ring on Saturday night as the heavyweight champion of the world and how do they achieve it? 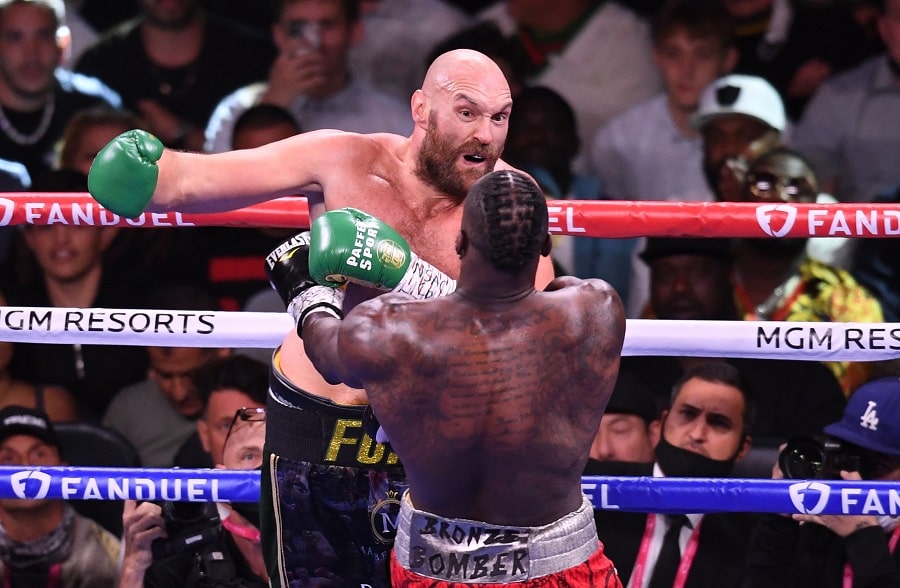 Anthony Crolla: I believe Tyson wins inside the distance. I wouldn’t be surprised if he has to ship a big one or two and gets buzzed along the way but I think it’ll be a Tyson stoppage. It’s hard to look past him going off recent form isn’t it?

Barry Jones: It’s heavyweight boxing and I guess everybody says this but one punch can change a fight. We’ve seen with Fury that one punch usually isn’t enough. It never has been. He’s been in with the biggest puncher in the division three times and been put down a few times and got up to really win the first fight and clearly win the third. Whyte’s gotta put him down and keep him down. Whyte’s a good boxer, he’s got a long reach and he’ll give it 110%. But the fact that he does over commit with his combinations will get him into more trouble than it does solve problems against somebody like Fury.

The old Fury would have frustrated him and danced away and Whyte would have felt like he was having encouragement and maybe psychologically been able to last longer. I think this new Fury who blocks and counters, who walks you down with a solid jab and almost thinks he can take any punch you throw at him is too much for Dillian Whyte. As much as Whyte deserves his chance I can’t see how he wins. Unless he knocks Fury out and – as we’ve seen in the last few fights – that’s an almost impossible task.

Zelfa Barrett: Fury wins, man. A masterclass. Can Whyte do it? Maybe by knockout only but I don’t think he will. Fury could stop Whyte though. People don’t understand how hard Fury hits. How big is he? 19 stone or something. Of course he can hit. He’s got devastating power. I just feel that to beat a Fury you’ve gotta be his size.

Tyson Fury’s greatest fights revisited
Fury vs Whyte: 10 insiders give us their prediction for the big fight