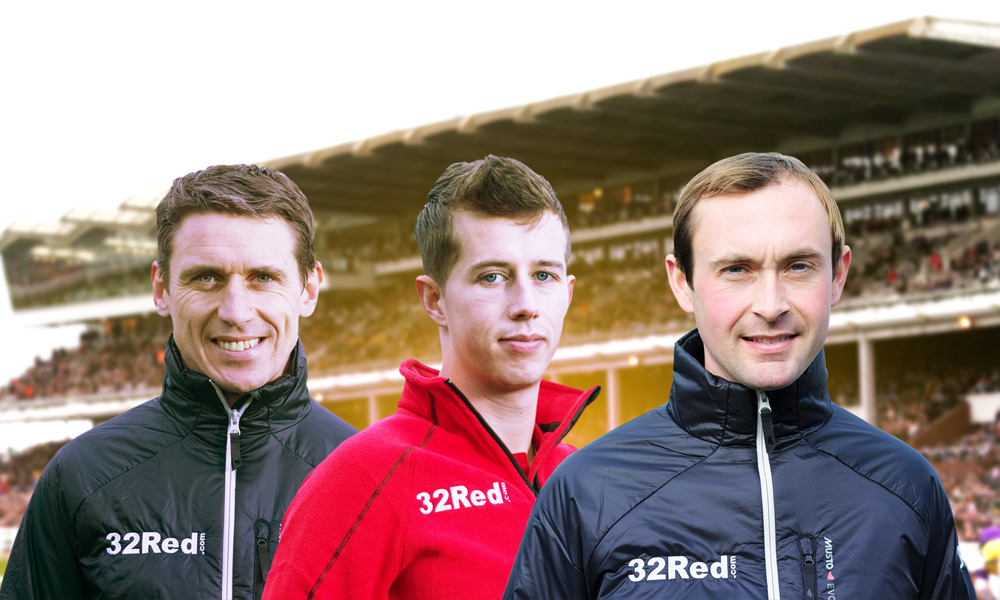 With the Grand National just around the corner, 32Red ambassadors and top jocks Bryan Cooper, Paddy Brennan and Nico de Boinville give their thoughts on the big race. For the latest betting and 5 places on the Grand National, visit 32Red Sport.

Gigginstown have five in the race and, as is the case with the race these days, you can make a case for them all.  Thunder And Roses has won an Irish Grand National, so it doesn’t take a big leap of faith to see him running well; Roi Des Francs comes here in good form after his win last time; Measureofmydreams would have a definite shout if coming back to the form of his third to Minella Rocco and Native River in last year’s four-miler at Cheltenham; and Wounded Warrior has some good form against high-class horses in the past two years or so, even if his recent efforts are not quite as convincing. But I decided on Rogue Angel, as I think he is probably the most solid of them all. Like Thunder And Roses, he has an Irish Grand National win on his CV, as well as a Kerry National, and he has had a break since a fair fifth in the Thyestes in January. In fact, this has been the plan for him for a while, and Mouse gave him a sight of the National fences in the Becher here in December, where he took to the fences well and travelled well for a long way before getting tired. A mark of 145 is fair, he has a nice racing weight as well, and he does tick a lot of boxes. Mouse is very happy with him and here is hoping he can get the double up after his Rule The World won last year. I do think he has a fair bit going for him.

I do struggle to get my head around the fact that I only get 1lb off a World Hurdle winner in More Of That and race off the same mark as a horse who finished fifth in the Gold Cup last time. In fact, I spoke to Phil Smith about him a week ago and told him that no-one would have batted an eyelid if he was in here off 10st 7lb and not 11st 5lb. And he seemed to agree! So I think Perfect Candidate has it all to do having gone up 6lb for winning a veterans’ race at Exeter last time, but he has been in great form and I think the stamina test will suit him and hopefully we can have a good spin from, or near, the front. Whether or not that will allow me to go one better than I did on Saint Are, who I finished runner-up on to Many Clouds in 2015, I very much doubt. But we will give it a good go!

The boss has always thought of him as a horse who could go well in a National, so let us hope he is right.  But his recent completion record isn’t great – I took a crashing fall on him at Kempton in February and he pulled up at Cheltenham last time – and in addition we also fell in the Topham last year. So the negatives are clear. But the positives are that he is a very smart horse on his day – I rode him when he gave 8lb and a beating to As De Mee, Native River and Blaklion at Chepstow two seasons ago – and a mark of 145 probably underestimates his raw talent, though he is actually rated 140 now after his recent efforts since the weights were published. If he enjoys the experience, then stranger things have happened!

If you’re looking to get even more from the Grand National, why not take advantage of our Free Games Giveaway where we are rewarding punters with free games on one of our most popular slot machines when you place your bets at 32Red Sport. Check out this great offer here.

Paddy Brennan: I struggle to get my head around the fact that I only get 1lb off a World Hurdle winner
Josephine Gordon joins 32Red ambassadors’ stable