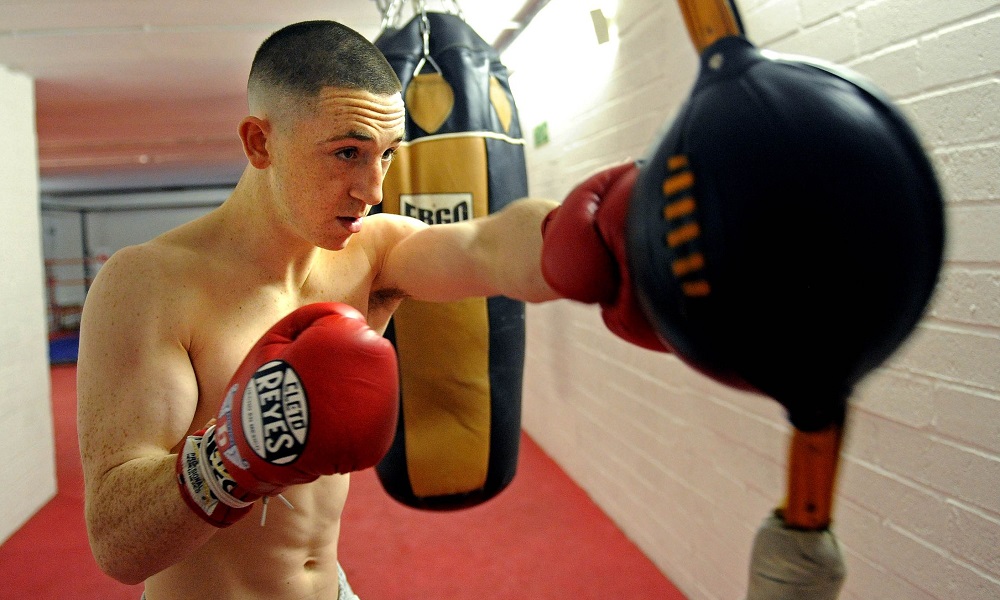 All that Jazza – British champion Dickens speaks exclusively to 32Red

The last time James ‘Jazza’ Dickens (22-2, 7 KO’s)  stepped into a ring, the eyes of the boxing world were on him. He had been lucky enough to catch the tail of Guillermo Rigondeaux, the brilliant Cuban super bantamweight who sadly appears as often as Halley’s Comet. After two cagey rounds, a stunning left hand broke Dickens’ jaw. He didn’t go down, but the fight was over.

Dickens entered the ring determined to beat the great Rigondeaux and the pain in his jaw will have paled in comparison to the heartache of defeat but what really cut straight to the heart of the workaholic was the ensuing ten-month lay-off.

He will return to action this Saturday night when he defends his British super bantamweight title against Thomas Patrick Ward (20-0, 2 KO’s) in Leeds and he couldn’t be happier. For the latest odds, see here.

“The doctor said to me ‘You’re not gonna fight again’ and there was a pause that in my head felt like about ten minutes but, really, it was about half a second and he said ‘for six months.’

“What went through my mind in those ten minutes? My whole world was turned upside down. I dunno. I was thinking ‘Who do you think you’re talking to? Nobody’s telling me that I can’t ever box again.’ Luckily he said it was only gonna be six months.”

Passing a physical examination is one thing but overcoming the realisation that another man is capable of damaging you to such an extent is a much bigger obstacle to overcome. It is a reality almost every fighter must face at some point and the rehabilitation begins in the gym, away from prying eyes. The only way to rebuild that lost confidence is to subject themselves to more punishment.

“When a fighter gets dropped or put down, they feel the same way when they first go back to the gym. When I lost to Kid Galahad in 2013, I had that a little bit and I didn’t like it. I didn’t like the feeling. I didn’t feel like a man,” Dickens said. “This time, Paul [Stevenson, his trainer at the Everton Red Triangle gym] had me doing body sparring and I was swinging my head around trying to get hit in the face. Paul shouted at me so I couldn’t do it and he wouldn’t let me spar for another month.

“When you know, you know. I knew when it was better and it took about four or five months.”

For most of us, the thought of fighting on with a broken jaw is unimaginable. Despite suffering such an injury, Dickens still has no real idea about exactly what it takes to endure through such pain. His break was so serious that his corner immediately removed that burden from his shoulders and pulled him out of the fight. Make no mistake, the 26 year old would have continued,

“I do think mine was a different type of break. It was hanging off. It was swinging. There was nothing holding my jaw to my face. I could move it around with my fingers after the fight. I’ve heard fighters say that the pain numbs it but this wasn’t like that. It was getting more severe. It was dangling so I can’t comment on other peoples but mine was excruciating. I’ve got some tiny titanium plates in there.

“I’m the only person that doesn’t take drugs and ends up with a swinging jaw.”

In November 2015, Dickens defended the Lonsdale belt against Ward’s elder brother, Martin. Film of the fight is in the same vault as the rumoured footage of Harry Grebb’s victory over Gene Tunney but if unbeaten Thomas is cut from the same cloth as his sibling – and the signs are that he may be even better – then fans watching the action on BT Sport should be treated to a thriller.

“I don’t want to see another Ward for as long as I live after this weekend,” Dickens laughs. “I’ve gotta take my hat off to them actually. I won the British title in 2015 and in those two years, there’s only been him and his kid who have challenged me. You’ve gotta respect that.

“I haven’t even seen it [the fight with Martin] myself but it was a gruelling fight. It was a bit of a war. We were put in a little tent in Durham and there was no television. I don’t think the fight got the exposure it deserved. It was a good fight.

“They put us in a sort of cloakroom [to get changed]. They eventually upgraded us and put us in this little room where they had an ice dispenser and a load of chairs stacked up. It was tiny. It was weird but it was boss. It was really great.

“I think you sort of go into a zone. It doesn’t matter where you are really. You don’t pay attention to it.  You’re going to end up in the ring eventually.

“He [Tommy] has never fought nobody like me but I do rate him though. I think he’s a really good fighter. I think he’s got class. You never see him shouting his mouth off and you never see him giving it the big ‘un. you only ever see him fighting hard and winning. He’s got himself a British title shot and he’s been waiting a long time for it. I think he should have waited a little bit longer for it. I’m not giving this belt up.

“I’ve got a lot more experience in a lot more departments than him. I’m not looking past him but I know I’m gonna beat Tommy.”

Jazza fights on Saturday night – see the latest odds here. And for a wide range of boxing markets, check out 32Red Sport here. If you’re up for a flutter on table games or the slots, be sure to check out our award-winning casino too!

Josh Warrington: It’s all or nothing with Kiko. He isn’t going to bow out with a points loss
Nicola Adams interview: Leeds’ hometown hero speaks