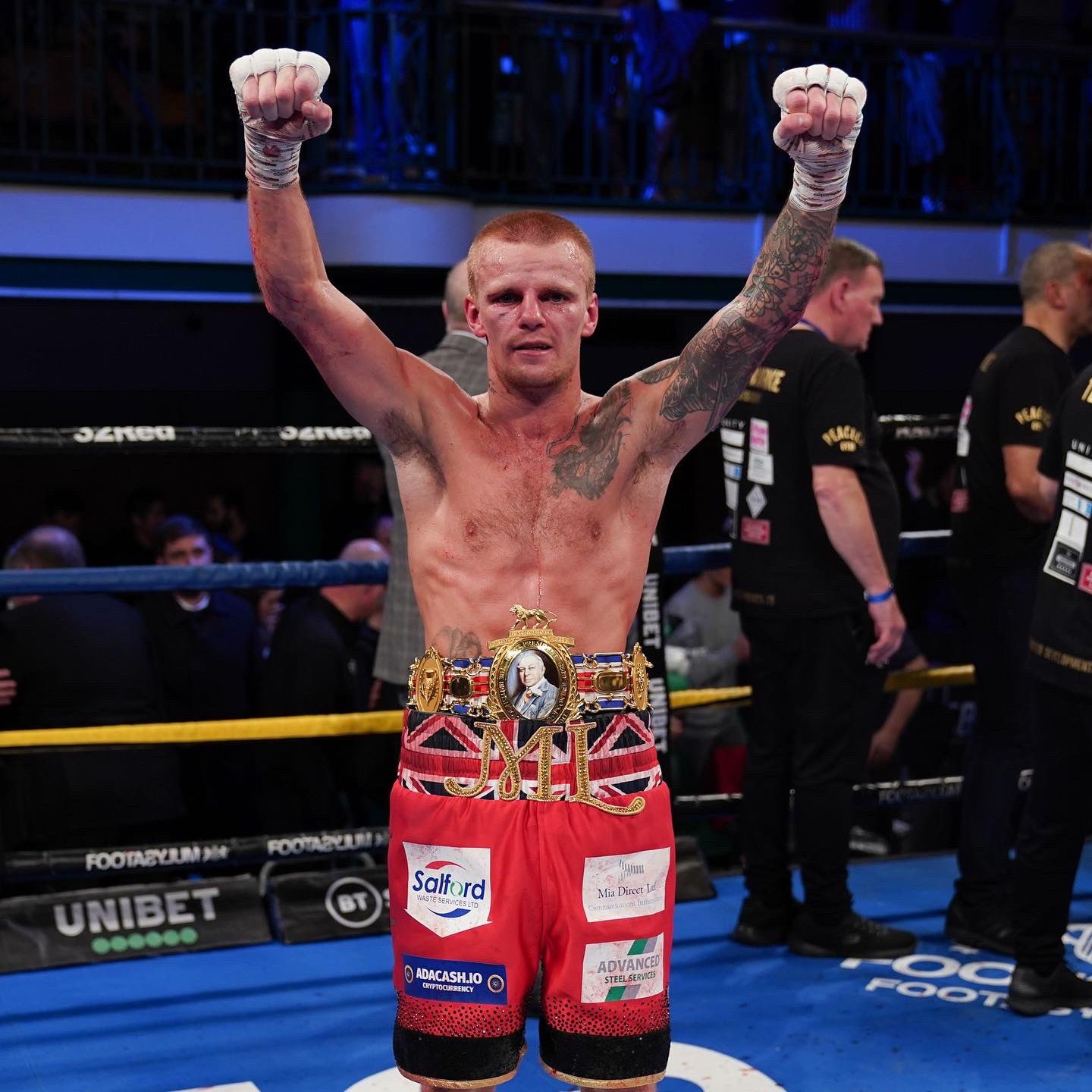 Salfordians are proud of their history and the success stories it has produced and if one of their own does well, they will throw their support behind them. Before one of Steve ‘The Viking’ Foster’s fights, the local fighter’s passionate fans carried a viking long boat down Manchester’s Deansgate before setting it alight.

“It finally sunk in a couple of weeks after the fight but I still see the belt every day and polish and what not,” Leach told 32Red. “For me, the British title is the best belt. I can say that I’ve won it now and my name will be in the history books. I’ll win other belts and they might be bigger than this one but they won’t mean as much to me as this one.”

The fans haven’t started parading just yet, but the famous Lonsdale belt has been on something of a city-wide tour and support is steadily growing.

“It’s getting there. This weekend is a weird one. There are a few of my mates away on stag do’s. There’s Parklife on and Ed Sheeran is on on the same night. Other than that it’s getting bigger and bigger each fight.”

Might the belt make an appearance at the famous Parklife festival on Sunday should he beat Liam Davies this weekend? “You never know,” Leach laughed.

Leach waited an eternity for his shot at the British title but his chance finally came when Jason Cunningham vacated the belt and moved on in search of bigger names. Leach was matched with heavy handed Chris Bourke for the vacant title with the agreement that he would defend the title on BT Sport if he won. He sparkled against Bourke, winning a clear decision and achieving his dream. He now faces Davies, another talented prospect.

“I took one away and now I’ve got one more to beat,” Leach said. “I wanted to be home in Salford for this fight but they hold all the cards and I’ve gotta sing to their song basically. They’re not doing me any favours but, yet again, I’m gonna prove everybody wrong like I’ve been doing for my whole career and hopefully I can get a homecoming fight next.”

Leach has been a slow burning talent. He turned professional back in 2014 but spent years juggling life as pro with a full time job. Slowly but surely, momentum has started to build. His ability has always been obvious but the first sign he could become a real force to be reckoned with came when he demolished the talented Louis Norman in two rounds back in 2018. Since then, the bigger the test, the better Leach has been. He dropped and outpointed Qais Ashfaq and outboxed and outfought Chris Bourke to win the British title.

“I’m aiming for the world honours that I – and the team around me – know I can achieve. The better the fighter, the better I perform. If you put me in with a journeyman who’s just gonna survive – like I’ve had to do a lot in my career – it’s hard to shine. The three people who’ve come to win, I’ve stopped one, dropped another twice and hurt the last one.

“And I’ve gone up a weight too,” Leach adds quickly. “I was a bantamweight really, not a super bantam but I’m really filling into the weight.”

Leach’s career hasn’t been played out under the spotlight and those looking at his record will see the same old list of journeymen. They will look at his 18-1-1 record and see just four stoppages. They will look at a nine year long professional career and wonder why it took so long for him to make an impact at title level. The only thing they can’t see – and won’t realise until they’re in the ring with him – is the actual thing that makes Leach so difficult to beat.

“People will always say that they’ll work me out in two or three rounds but I can’t work myself out. How are they gonna work me out? It’s a sort of freestyle. Whatever feels comfortable to throw, I’ll throw. I can be on the pads in the gym with Jamie and Nigel and they’ll tell me to slip and throw a jab but I’ll slip and throw a hook or a backhand. They look as if to say, ‘What was that?’ Obviously on the night I’ll listen to Jamie and Nigel about certain tactics and which punches to throw and when I feel like throwing my own stuff i will. The shot that knocked Louis Norman down was one we worked on for weeks and weeks and weeks. The same with the Ashfaq fight. the same with the Bourke fight. The plan was to take his power away. When I see the opening I put it into action. Along with my unorthodox-ness.”

Davies will be confident he can solve the problem. He has upped his own level of performance every time he has stepped up in level. He made people sit up and take notice by stopping Sean Cairns for the English bantamweight title and has scored a couple of other eye catching stoppages. Like Bourke, he is unbeaten and will be extremely confident and roared on by his local support. All of which is music to Leach’s ears.

“I’m no stranger to being in an away corner. I’ve done it more of less my whole career apart from the shows [his manager] Steve Wood has put on but I’m happy to go in the away corner and show people what I can do,” he said.

“When somebody comes to win, you’ll get the best out of me and Liam Davies will. You’ll see me box to the best of my ability and show what I can do.

“He’s gonna come to win and he’s gonna try and knock me out. I haven’t seen much of his fights to be honest. I watched him about Sean Cairns when they fought for the title I was made to give up. He looked alright. He’s very tall for the weight but I’ve fought tall people. I prefer that. You can get on the inside and do my stuff rather than being on the back foot and going away all the time.”

Leach’s horizons have expanded. the British title is his pride and joy but he has began to look farther ahead. 28 years old, living life as a full time professional and with the confidence of a champion flowing through him, he has begun to look beyond these shores.

“I’m a full time fighter now and I’ve got the British title but that’s just the start. I want bigger and better things. I’d love to win the British outright like my coach Jamie but if something comes up inbetween I’d be silly to say no. I’ve got people to look after and kids to feed. I’m not in the sport for the money, I’m in it to be the best but the more the titles go up, the more the money goes up and that’s beneficial for the kids.”

Continue Reading
You may also like...
Related Topics:Boxing, Marc Leach

Liam Davies: I’m gonna win it!
Mark Chamberlain exclusive: if there’s an opportunity for a knockout, I’ll take it