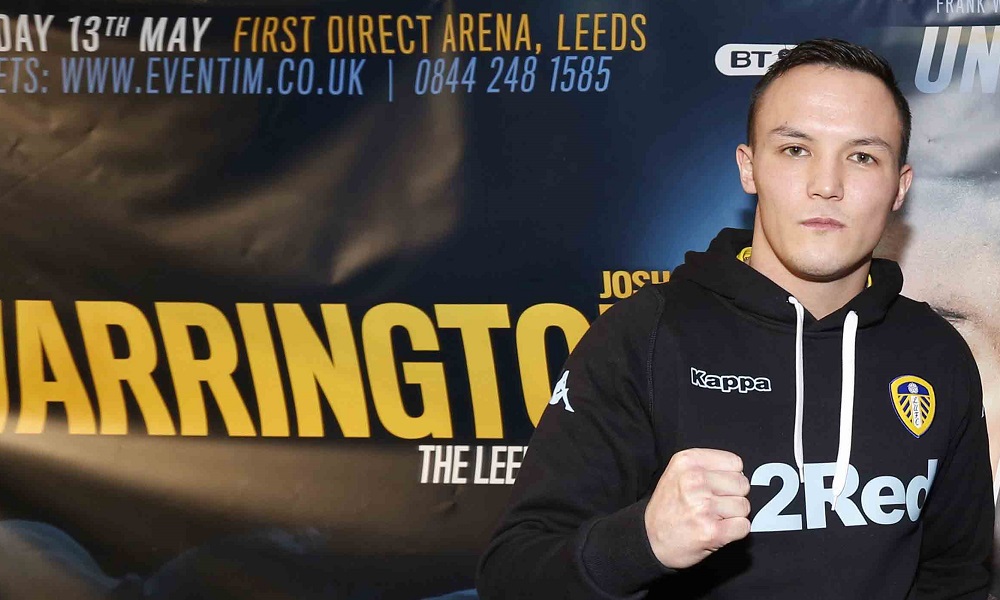 Boxing Preview: Josh Warrington can put the kibosh on Kiko

32Red ambassador Josh Warrington returns to action this Saturday against Kiko Martinez, a name British boxing fans will be very familiar with. Having seen his beloved Leeds United agonisingly miss out on the play-offs after a season pushing for promotion, Warrington will be looking to put a smile back on the faces of his army of followers and take one-step closer to a World Title shot.

This weekend should have been a party atmosphere in Leeds. After spending the majority of the season chasing down Brighton and Newcastle, Leeds fans will have been making plans for a Saturday sporting double-header. Kick the day off with Leeds landing some early blows against a play-off rival, before ‘marching on together’ to the First Direct Arena to see Josh Warrington KO Spaniard Martinez.

While Leeds United may have just run out of steam in the latter stages, don’t expect things to go the same way for Warrington this weekend. Josh may not be known for his knockout power – his record is five stoppages in twenty-four wins – but his stamina and work-rate has never been in question. His relentless approach should match up nicely against the all-action Martinez, but I expect the younger, fresher and hungrier Warrington to have too much for Kiko and at 6/5, I’ll be backing him to get the job done inside the distance. For the latest odds, see here.

Martinez is no stranger to these shores. Most people will be familiar with him from his fights with Carl Frampton (twice) and Scott Quigg, but dig a little further back into the career of the fiery Spaniard and you realise Saturday will actually be the seventh time he’s boxed in the UK. Unfortunately for Martinez, a victory against journeyman Dougie Curran aside, he’s always flown home having tasted defeat. For that reason Warrington is the overwhelming 1/25 favourite.

That record on the face of it isn’t impressive, but ask Quigg, Frampton and Munroe (the men who’ve handed him those defeats) about their experiences and all will tell you that the victories didn’t come easily. Martinez has never gone into a fight with the intention of nicking a decision… he can punch and he comes swinging, so anyone he faces must stay switched on for every second of every round or they’re going to get a nasty shock (Martinez to win by KO is 14/1). A perfect example of his attitude came in his 2015 loss to Scott Quigg, where despite being stopped early, he gave Quigg a torrid time in the first round. Had the Mancunian not pulled a peach of an uppercut out of the bag at the start of the second round, things may have been very interesting. It’s fair to say that we’ll see more of the same this weekend.

My big negative for Martinez is wear and tear. Unbelievably for someone who’s been fighting professionally since 2004, he’s still only 31! A lot of fighters will only be reaching their peak at that age, but Martinez’s aggressive, come forward style tends to come at a cost and in recent outings there has been evidence of father time catching up with him. There’s no shame in losing to Quigg, Frampton and Leo Santa Cruz as Martinez has done in recent year, but a July 2016 draw against the unknown Eusebio Osejo is a notable blip on his record. The peak Kiko Martinez of 2013/14 would have gobbled an opponent like that up and the reality is if he’s taking shots from a journeyman of that calibre, it’s only going to get worse as he steps back up in class to face Warrington.

Warrington may have gone his first fifteen fights without finding a stoppage, but as he said in his recent 32Red blog, he wasn’t handed a string of imports happy to accept a payday and an early night. The journeymen Warrington cut his teeth on were all well-versed in negatively navigating their way through a bout and while it’s obvious Josh is not Mike Tyson, the fact stoppages have started to come in recent fights show he’s also not the feather fisted fighter he was previously labelled as. His last outing against Patrick Hyland saw Warrington sitting down on his punches more, a subtle change which brought about the 9th round stoppage.

Martinez will undoubtedly bring some early fire and we may well see a competitive scrap for the first few rounds, but while Leeds dropped away in the championship rounds, I’m expecting Warrington to come on strong. The bet of the weekend is Warrington to win by KO at 6/5, but if you fancy something at a longer price then rounds 9-12 are all individually available at 12/1 or better and there’s more than a fair chance that’s when Josh will get the job done.

Josh Warrington fights on Saturday night – see the latest odds here. And for a wide range of boxing markets, check out 32Red Sport here. If you’re up for a flutter on table games or the slots, be sure to check out our award-winning casino too!